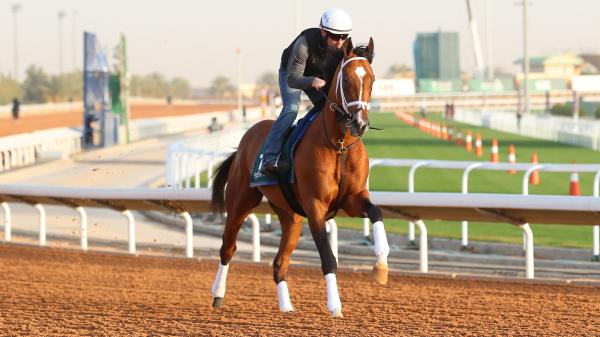 Is Mandaloun Vulnerable in the Stephen Foster?

The $750,000, Grade 2 Stephen Foster Stakes brings together a field of seven horses in the Longines Breeders’ Cup Classic division trying to earn a “Win and You’re In” spot into the big race in November. Leading the field is Mandaloun, who has earned more than $2 million while winning six of 10 races. Mandaloun makes his return to the races after four months off and following a ninth of 14 finish in the Group 1 Saudi Cup Stakes at the end of February.

Next in terms of accomplishments, and perhaps in better recent form, are Olympiad and Last Samurai. Olympiad has won all four starts in 2022 including the Grade 2 New Orleans Classic and the Grade 2 Alysheba Stakes Presented by Sentient Jet in succession. Last Samurai won the Grade 2 Oaklawn Handicap on April 22 in his last start. Caddo River is going for his fourth straight win and enters a two-turn stakes for the first time since last spring when second in the Grade 1 Arkansas Derby.  Americanrevolution is a winner of five races from eight starts including the Grade 1 Cigar Mile Handicap Presented by NYRA Bets last December. Proxy has finished in-the-money in four straight races including when second behind Olympiad in the New Orleans Classic. Title Ready rounds out the field, having earned over three-quarters of a million dollars in his career, with his last win coming in the Grade 3 Louisiana Stakes in January of 2021.

Olympiad is the “NOW” horse, as he’s won three graded stakes in a row including one at this Grade 2 level and at the mile and one-eighth distance of the Stephen Foster. Olympiad earned his most recent win in his first start at Churchill Downs, in May when easily winning the Alysheba Stakes. Starting with the first of his four most recent wins, Olympiad has earned 116, 105, 112 and 107 Equibase Speed Figures. After Olympiad shipped into Churchill from Hall of Fame trainer Bill Mott’s Florida base and won the Alysheba, he then went to New York, where he has been in consistent training  before shipping back to Kentucky for this race. Junior Alvarado has been aboard for the colt’s last four wins and rides again, and Olympiad has the tactical speed to sit in second in the early stages behind whichever horse wants to lead early in this field. Interestingly enough, not one of the seven entrants has led at either the opening quarter- or half-mile mark in a race in a very long time. My guess is Americanrevolution, who has drawn just inside Olympiad, will take advantage of his post and take the lead from the start. From that point on, Olympiad will be in the catbird seat and can take over in the stretch just like he did in the New Orleans Classic and in the Alysheba, not to be caught the rest of the way.

Caddo River is another horse in tremendous current form, and with Mandaloun’s recent form and ability to fire with an effort good enough to win in this field in question following four months off, Caddo River should be considered a contender. First or second in nine of 13 career starts, Caddo River brought his record at Churchill to a perfect 2-for-2 with a win in a classified allowance race (just below stakes level) four weeks ago. That effort earned a strong 105 speed figure, which followed 107 and 103 Equibase figures. The 107 figure equaled his best figure and effort when winning the 2021 Smarty Jones Stakes by 10 lengths in January of last year. Ricardo Santana Jr. has been aboard Caddo River for his last four races, including those three straight wins, and rides again, providing more evidence this colt could run well enough to post the upset.

Last Samurai won the Oaklawn Handicap when last seen in April, posting the upset at 12.90-1 odds while strongly drawing off by four lengths at the end. That followed a huge effort when a neck short of beating multiple stakes winner Lone Rock in the Temperence Hill Stakes three weeks earlier. The first of those two efforts earned the colt a 112 Equibase Speed Figure more than good enough to compete with the best in this race, and his win in the Oaklawn Handicap earned a 104 figure. Moving to the barn of Hall of Fame trainer D. Wayne Lukas since his last race and having put in a very strong :47.80 half-mile workout in preparation for this race, Last Samurai is yet another who might go to post at higher odds than make sense given his probability to run well enough to win.

Mandaloun certainly can win with his best effort, but there are questions as to whether that would be good enough to win against some of the others here, particularly off a four-month layoff. Mandaloun won the Risen Star Stakes Presented by Lamarque Ford last year as a 3-year old then two races later was placed first in the Kentucky Derby Presented by Woodford Reserve following the disqualification of Medina Spirit, earning a 110 figure in the process. After following that up with a 109 figure winning the TVG.com Pegasus Stakes at Monmouth Park last June, Mandaloun was placed first in the TVG.com Haskell Stakes after missing by a nose when original winner Hot Rod Charlie was disqualified.

After six months off, Mandaloun faced older horses for the first time and won the Louisiana Stakes in January with a career-best 115 speed figure, before finishing ninth of 14, beaten by nearly 19 lengths, in the Saudi Cup. He’s been working well for his first start in more than four months but nevertheless he’s giving up a lot of physical conditioning to the other six horses in the field, three of which have run as recently as four weeks ago.

In spite of winning the Cigar Mile last December with a 115 figure, Americanrevolution ran poorly when fourth in the Blame Stakes on June 4 at Churchill as the prohibitive favorite. Furthermore, a Race Lens query about Todd Pletcher’s record in graded dirt route stakes with horses making their second starts off a layoff reveals a poor 6-for-41 record going back five years. Proxy finished well for second in the Blame Stakes (110 figure), the same race in which Americanrevolution was fourth. He was easily beaten by Olympiad two races before that and although he could finish in-the-money again, I don’t believe he can beat any of the top contenders if they run their best race and he does as well. Title Ready hasn’t won in six races, and hasn’t threatened to win since victorious in the Louisiana Stakes 18 months ago with a 100 figure.