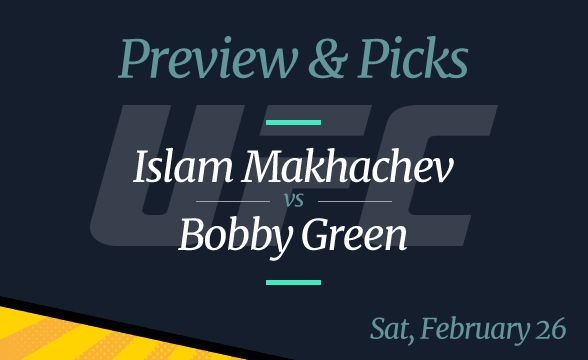 Islam Makhachev vs Bobby Green is the headliner fight of UFC Vegas 49. However, it wasn’t supposed to be like that. Originally Makhachev was supposed to fight Beneil Dariush, but he broke his fibula some 10 days ago. To save the day, Bobby Green stepped up.

With a 10 days’ notice, Green hasn’t had much time to prepare for the bout, which explains why oddsmakers see him as a huge underdog. Can he upset the odds and get a win against a potential lightweight contender? Let’s see!

All odds are per FanDuel as of February 22.

A Must-Win Fight for Makhachev

With a 21-1 record in his pro career and a 10-1 record since joining the UFC, Makhachev is thought of as one of the best lightweight fighters on the planet. Evidence of this is that he’s currently sitting in the #4 position in the UFC Lightweight Rankings with a pretty good chance of going up in the near future.

In fact, it’s very likely that if he wins this weekend, his next fight is going to be one for the title. That said, it’s obvious that he has the motivation to win, but does he have the skills to beat Green?

Makhachev is a former Sambo world champion who’s a true expert when it comes to grappling. The proof is that almost half of his wins happened by submission. Three of those happened in his previous three fights.

What needs to worry him slightly is that he’s taking on a great striker who’s famous for his fitness. Plus, Green has experience with Brazilian Jiu-Jitsu, the same as Adriano Martins – the only man who’s defeated Makhachev so far.

Can Green Cause a Sensation on Saturday?

Probably not – that’s the answer to this question. The are several reasons for that, starting with the fact that he’s had just 10 days to prepare for the fight. Another reason is that it’s been just two weeks since his previous fight.

It was February 12, 2022, when he fought the last time. Green did well, beating Nasrat Haqparast by unanimous decision after three 5-minute rounds.

The win over Haqparast was his 29th career win, while he also has 12 losses in his portfolio. The most recent of those losses happened last August when Rafael Fiziev beat him by decision. Speaking of which, nine of Green’s previous ten fights were decided by the judges.

Are we going to see the same scenario happening again? Probably not as Makachev will want to finish his opponent ASAP. That said, Makachev by submission seems like the most likely outcome.

2022-02-23
Previous Post: Medina Spirit Disqualified From 2021 Kentucky Derby Win
Next Post: Nemeth is in the Hunt For His Third Super MILLION$ Title