Despite a slow break and being boxed in early, 2-5 favorite Flightline remained undefeated with a six-length runaway victory in Saturday’s $1 million, Grade 1 Metropolitan Handicap at Belmont Park. Owned by Hronis Racing, Siena Farm, Summer Wind Equine, West Point Thoroughbreds, and Woodford Racing, the 4-year-old son of Tapit ran a mile over the fast main track in 1:33.59.

“A great horse overcoming adversity,” said trainer John Sadler. “It didn’t go really the way we thought it would. It’s the thrill of a lifetime; he’s a one-time horse for me. I’ve never seen one like him.”

The victory earned Flightline an expenses-paid berth to the $1 million Big Ass Fans Breeders’ Cup Dirt Mile (G1) in November at Keeneland, though connections are hoping to point the colt to the 1 1/4-mile Classic.

Alvarado moved Speaker’s Corner over to the inside, boxing Flightline in behind the leader and inside Happy Saver. Flightline remained calm, however, and despite Alvarado crowding the favorite, Prat was able to maneuver Flightline to the outside after a first quarter in 22.78 seconds. Speaker’s Corner led by just over a length through a half-mile in 45.01 seconds, with Flightline trailing him on the outside in second.

Flightline inched toward the leader on the far turn, and though Alvarado guided Speaker’s Corner a bit wide, Flightline blew by that rival with ease to be a length in front after three-quarters of a mile in 1:08.54. The battle was on for second between Speaker’s Corner and Happy Saver, but Flightline was all alone through the length of the stretch to cross the wire six lengths the best.

Bred in Kentucky by co-owner Jane Lyon’s Summer Wind Farm, Flightline is out of the multiple Grade 1-placed, graded stakes-winning Indian Charlie mare Feathered. Lyon purchased Feathered for $2.35 million at the 2016 Keeneland November sale with a daughter of War Front in utero, and bred her back to Tapit on the cover that produced Flightline in 2018.

The colt went through the Fasig-Tipton Saratoga Select Yearling sale, bringing a final bid of $1 million from West Point Thoroughbreds. On debut, Flightline broke his maiden by 13 1/4 lengths, which he followed up with a 12 3/4-length triumph in an allowance race at Del Mar.

For his first start in graded stakes company, Flightline dominated the Grade 1 Malibu Stakes by 11 1/2 lengths and registered a 118 Beyer, the largest recorded figure by a horse last year.

Sadler was forced to a planned start in March’s Grade 2 San Carlos with Flightline earlier this year when colt strained a hock, but everything got back on track and Flightline was as impressive as ever in the Met Mile. The colt has won all four of his lifetime starts for earnings of $794,800. 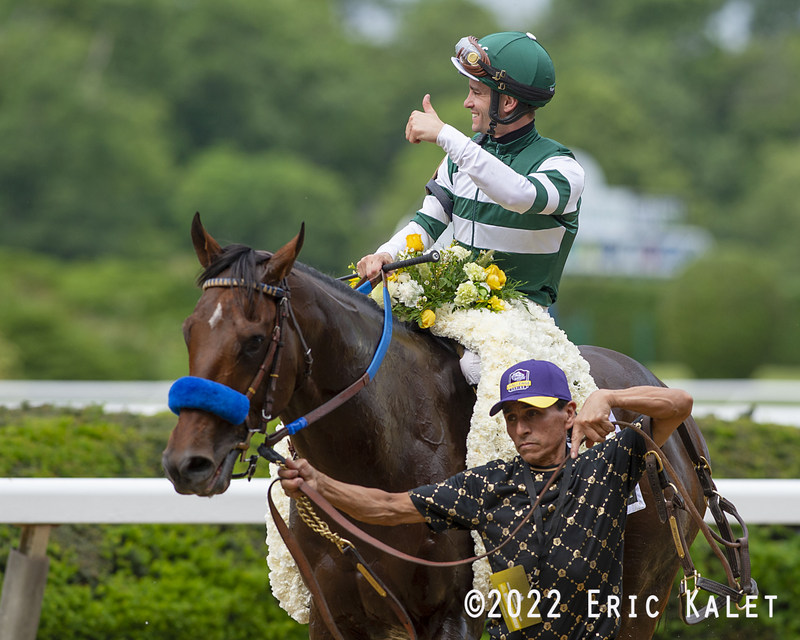 The Change Ahead: Where Are All These New Veterinarians Going To Come From? – Horse Racing News

View From The Eighth Pole: How Transparency Can Build Greater Confidence In The Game – Horse Racing News

Where to Watch/Listen: July 4 Holiday Weekend 2022