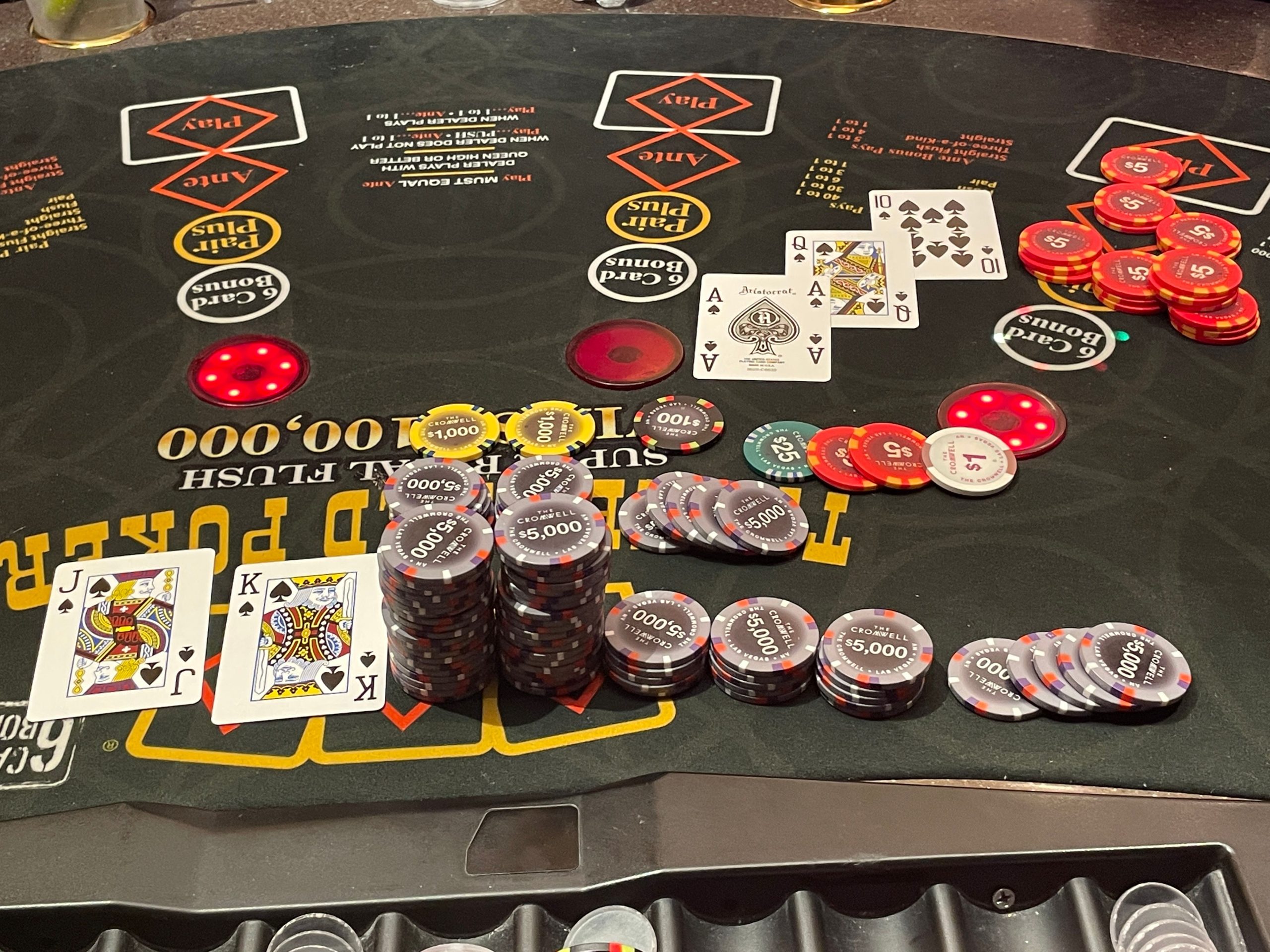 An Oregon man won $377,136 over the weekend while playing Three Card Poker at The Cromwell. It is a boutique hotel-casino on the Las Vegas Strip.

The winning royal flush hand at The Cromwell, pictured above. It led to an Oregon man winning $377,136. (Image: Caesars Entertainment)

Michael Hayes of Lebanon, Ore., got the jackpot after hitting a royal flush at the Caesars Entertainment property on Saturday. His cards were the 10, Jack, Queen, King and Ace of Spades. He also got a mega progressive jackpot.

Hayes said he expects to use the winnings to take his wife on her dream vacation, according to the company.

He is a member of Caesars Rewards. It is the company’s loyalty program.

The Cromwell has 66 table games and 440 slot machines. The Cromwell was selected recently as a top 10 casino by readers of USA Today.

Other Caesars Entertainment properties also saw recent jackpots. Last month, for instance, Brent Weiss of Las Vegas won $465,945 while playing a Mississippi Stud poker game at the Flamingo Las Vegas Casino. It was a mega progressive jackpot. He won with a royal flush.

Also in November, a player at the Linq won $114,251 in a progressive jackpot. The patron was playing Pai Gow.

In October, another player won $187,542 while playing Let It Ride poker at the Flamingo. It was through a mega progressive jackpot, KTNV, a local TV station, said. The player won with a royal flush and wasn’t identified.

Also in October, an unnamed local won $288,024 at the Flamingo. It was also through a mega progressive jackpot. The winning hand was also a royal flush. The local was playing Crazy-4 poker.

The Linq has also seen prior jackpot winners in recent months.

In March a player identified only as “Michael T.” won $1,041,779 at the Linq. It was on a mega progressive jackpot while playing Let It Ride, KLAS, another local TV station, said. The casino didn’t identify the player’s hometown.

Possible Spin Off of Digital Gaming

In November, Casino.org reported that Caesars Entertainment was open to the idea of spinning off its digital gaming unit if that corporate action would unlock shareholder value.

But the company’s preference was to retain full ownership of that fast-growing subsidiary.

Reeg replied that the company’s “competitive advantage here is tying it to the existing brick-and-mortar business and our Caesars Rewards database. And it would be my preference that that remains 100% owned by the parent company.”

Caesars’ digital operations, including internet casinos, lost just $38 million in the September quarter as revenue surged 120%. That’s compared with a year-earlier loss of $164 million. Expectations are in place for the operators’ interactive business to turn profitable in months.