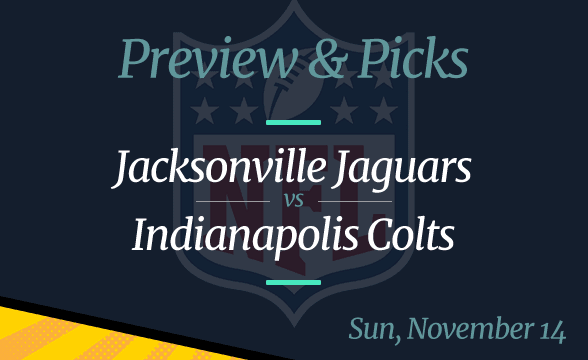 The Jacksonville Jaguars beat the favored Buffalo Bills in Week 9, but the game also saw their starting quarterback Trevor Lawrence picking up an ankle injury. At this point, it’s still unclear whether he’ll return for the Week 10 divisional clash with the Indianapolis Colts.

With or without Lawrence on the field, the Jaguars need to be thought of as the underdog in this game. After all, they’re taking on the in-form Colts in Indianapolis, where they’re without a win since 2017.

All odds are per DraftKings as of November 9.

Jacksonville’s rookie quarterback injured his ankle during the TNF game in Week 9. He did return to the game but will have to undergo treatment in the days heading into Week 10. His diagnosis is a low-ankle sprain, which usually requires at least a week to heal.

The QB didn’t do much in the win over the Bills, when we saw him going 15-for-26 for 118 passing yards, without making a touchdown pass. Actually, the Jaguars failed to score a single TD in that game, with three field goals, which turned out enough.

The reason is that the Bills were horrible in the offense. Of course, the Jags did very well defensively in that game, keeping the opponents to only six points. That’s their best defensive performance, not just in the 2021 season, but in years.

Still, despite the brilliant performance in Week 9, the Jaguars remain one of the worst teams in the AFC when the defense is concerned. In fact, their average is 26.12 points allowed per game.

Indianapolis is 4-5 on the season, with all four wins happening in the past six games. During that period, we saw them losing two games in overtime. Both of those defeats happened against two teams from the top of the AFC rankings – the Tennessee Titans and Baltimore Ravens.

The Colts’ most recent game saw them beating the New York Jets 45-30. Obviously, the Colts’ offense was superb in that game. Their QB Carson Wentz went 22-for-30 passing for 272 yards and three touchdowns, without a single interception.

Apart from being great passing-wise, they also had a great rushing performance. This goes especially for their running back, Jonathan Taylor, who made 19 carries for 172 yards and two touchdowns.

They did great offensively, but their defense did allow 30 points in that game. That’s the second straight game that we saw them conceding over 30. As a result, they now have a total of 213 points conceded in the nine games. That’s something that could definitely do with an improvement. Luckily for the Colts, they’re taking on one of the least productive offenses in the league in Week 10.

Pick: Indianapolis Colts to win; over 47.5 points should hit.