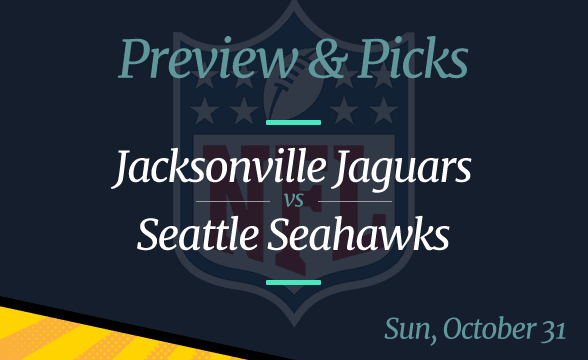 The Seattle Seahawks are 2-5 in the 2021 season and without their best player Russell Wilson, they might be heading for another loss. The superstar quarterback will remain out of the field until (at least) Week 10. Is this something the Jacksonville Jaguars can take advantage of?

Oddsmakers don’t seem to think so. The team from Seattle remains the favorite, although the odds have started shortening on Jacksonville.

All odds are per DraftKings as of October 27.

Jacksonville Coming Off a Win Against Miami

The Jags managed to beat their interstate rivals in week 7. The score was 23-20 against the Miami Dolphins, which took place in London, England.

By winning that game, they put an end to their losing streak of five straight games. As a result, their 2021 record is now 2-5. Can they improve it even more?

Their roster isn’t great, although it does look much better than the last year. After all, they got a brand-new quarterback to call offensive plays. The man in question is rookie Trevor Lawrence, who seems to be constantly improving.

In Week 7, we saw the Clemson product go 25/41 for 319 yards and one touchdown. That’s not a bad output, but against the Seahawks, he’ll have to do much, much better.

It’s the Jags’ offense that needs to do well on Sunday for this team to win. Their defense, however, should not have a too difficult job against Wilson-less Seahawks.

In Week 5, Wilson injured his thumb against the LA Rams in a game his team lost. Without him to call plays, they lost another two games, scoring a total of 33 points. That’s 16.5 points per game, which is way below their average when Wilson was on the field.

This begs the question of whether Seattle is going to be able to score enough points in Week 8. Although the Jags’ defense isn’t elite, the Seahawks will probably struggle to score more than just one or two TDs. Will that be enough for a win?

It depends on their defensive display. So far, we saw them conceding 162 points, which is just 10 points better than the Jaguars.

That said, the Jaguars vs Seahawks will probably be a very close game, in which anything could happen. Backing the underdog seems like a smart option, especially knowing that the spread is set to four points. It seems unlikely that Jacksonville is going to lose by more than that.