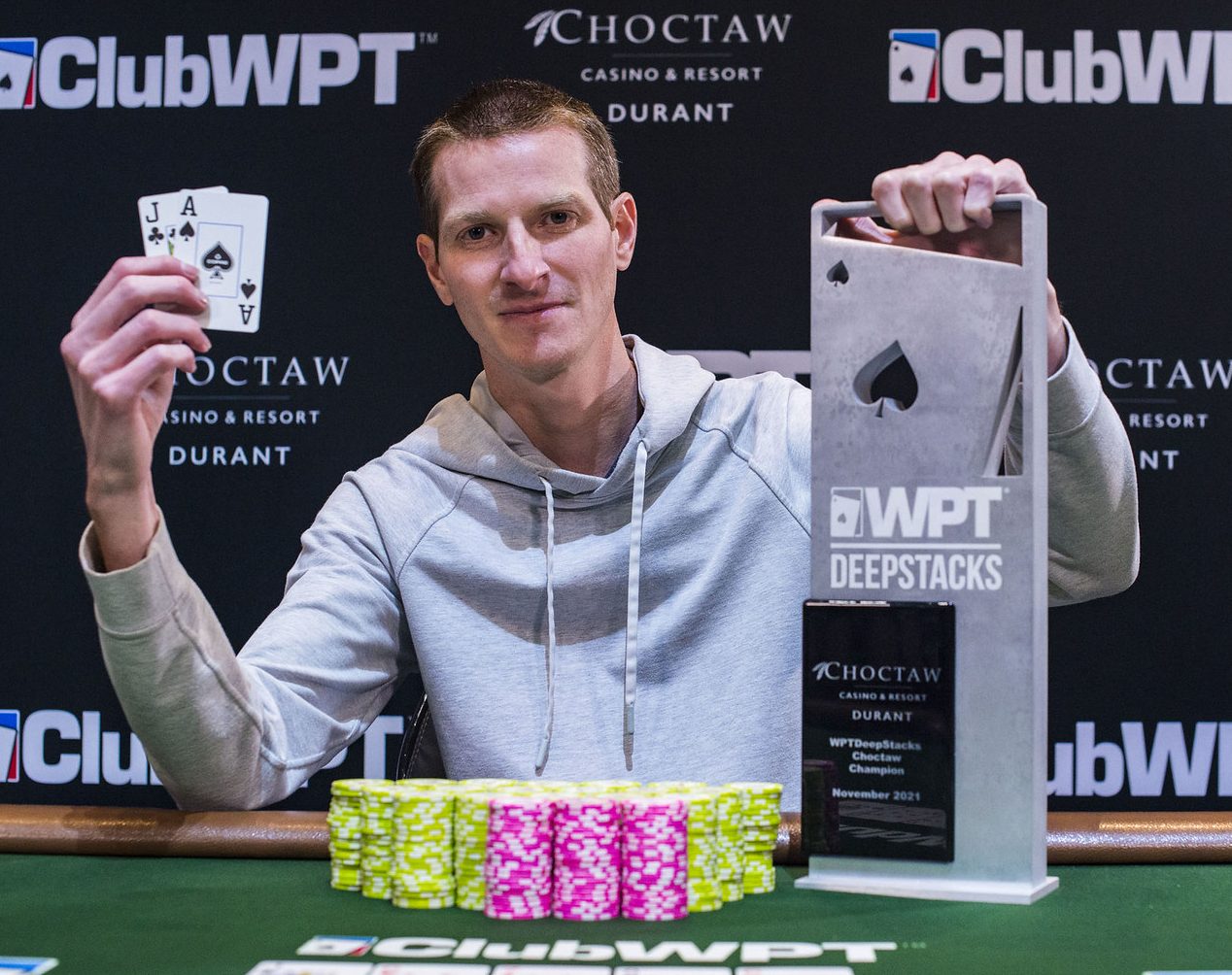 While the WSOP’s first starting days of the Main Event were churning away, a new WPT DeepStacks champion was crowned at Oklahoma’s Choctaw Casino in another sign that live tournament poker is starting to return to “normal” across the country.

That payout includes a $2,500 entry in the WPT DeepStacks Championship Dec. 4-7 at Thunder Valley Casino in Lincoln, California, and $500 in travel funds.

Ward outlasted 544 other players to claim his first six-figure score and first live tournament victory. And it almost didn’t happen. Ward was one of the last players to enter, registering on the Day 1B dinner break.

By the time he had made worked his late entry to the final table, Ward was a short stack with just 22 big blinds.

“I was trying to wait and let some of the shorter stacks bust out,” Ward told WPT reporters. “That happened and then I just caught cards at the right time.”

For runner-up finisher Marc Maxey, from across the border in Texas, the tournament gave him his second-largest cash … and his first five-figure score since final tabling a WSOP Circuit event at Choctaw (5th place for $92,779) in 2015.

With more than $3.7 million in tournament cashes, Nick Pupillo may have been the favorite to win as play went to three-handed, but was crippled by Ward in a hand that shows how painful poker can be. One hand into three-handed play, Ward raised under the gun with two black 9s and Pupillo re-raised him to 1.2 million. It took Ward a few minutes before moving all-in for 4.7 million. Now it was Pupillo’s turn to tank, but he made the call with AQ.

Pupillo took the lead with a queen on the flop, only to see a river nine spike his hopes at claiming the title. Crippled, he would be out two hands later.

The WPT’s Main Tour restarted its live tournaments in June at Seminole Hard Rock Tampa with a $3,500 event that attracted 1,165 entrants. Won by reigning WPT Player of the Year Brian Altman, the win put him over the $5 million tourney mark.

Then in early July, the $5,000 WPT Venetian attracted 1,199 players, followed by a $3,700 five-day event, again at Choctaw, which saw 964 entries. The Choctaw event had a $1 million prize pool guarantee, while none of the others did.

The stop on WPT’s Main Tour takes place Nov. 26 – Dec. 1 at Seminole Hardrock in Hollywood Florida with a $2 million guaranteed $3,500 buy-in event. The Main Tour’s season ends with the $10K WPT Five Diamond World Poker Classic at the Bellagio, starting on Dec. 15. None of the tournaments in 2021 were or will be filmed for TV broadcast.

The WPT’s mid-tier DeepStacks tour resumed in May with the WPT DeepStacks Gold Coast in Melbourne, Australia.

The first DeepStacks event in the US took place at the Venetian in Las Vegas in July, before the tour went international again with a stop in Sochi, Russia, in August. Two online events filled the schedule before this week’s Choctaw stop, and the DeepStacks tour will end its season at California’s Thunder Valley Resort, starting on Dec. 4.

WPT Executive Tournament Director Matt Savage told CardsChat News that “five to seven” events are being planned to be filmed for television in 2022, but nothing is set in stone yet.

“We’ll probably have less events, but more quality events,” Savage said. “We have some specials things that are coming out for the 20th anniversary as well, but like I said, I can’t quite let everything out yet. We have to go with whatever are partner casinos are able to do and willing to do.”

The WSOP recently announced it will restart its popular Circuit events with 13 multi-tournament series’ starting Nov. 25, at Harrah’s Cherokee Casino in North Carolina.