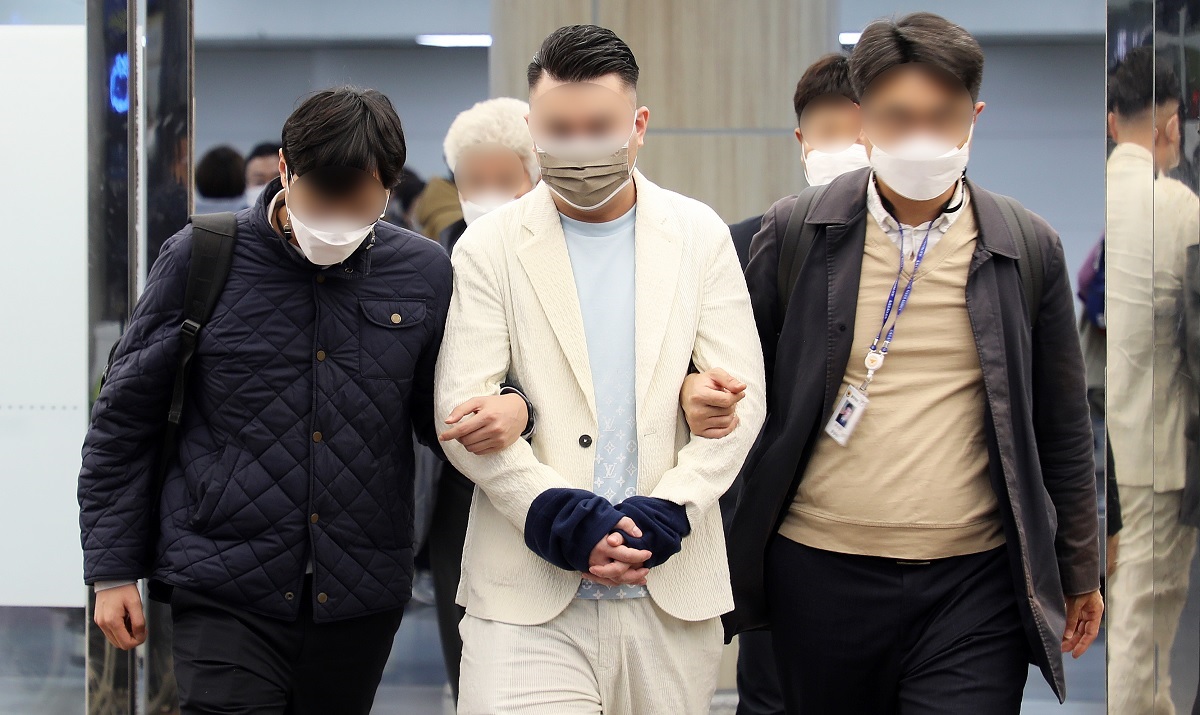 South Korean authorities have detained and reluctantly released a major suspect in the 2021 robbery of Landing International’s Jeju Shinhwa World casino on the island resort of Jeju.

Enter the Wu: The suspect, center, is escorted by police at Incheon International Airport after arriving off a flight from Dubai. (Image: Daum News1)

A Chinese national, identified only by Korean media by his last name “Wu,” or “Woo,” was intercepted at Incheon Airport, which serves Seoul.

Wu, a casino junket operator, arrived on a flight from Dubai on November 2. Jeju authorities considered him a fugitive and had requested an Interpol Red Notice. But Wu appears to have returned to South Korea voluntarily.

When the equivalent of US$13.38 million in South Korean currency simply disappeared from a safe at Jeju Shinhwa World in January 2021, it was dubbed the “14.5 billion won evaporation case” by local media.

News of the missing money caused Landing’s shares to plunge 7.6% on the Hong Kong Stock Exchange.

At first, the robbery mystified law enforcement, because such a large amount of cash would be heavy and exceedingly difficult to transport.

Security video corresponding to the time of the theft had been erased. Around 291,200 individual banknotes were missing, each worth 50,000 won ($38). That would weigh in at more than 617 lbs. Police suspected at least two perpetrators were involved because of the bulkiness of the cash.

And the difficulty of transporting it undetected via airports or seaports led them to believe the money was likely still on the island. But where?

The break in the case came when Jeju cops looked into Lim Mo, 56, a female Chinese Malaysian executive who managed funds at the casino. She had gone on vacation before Christmas and was now incommunicado.

Lim was one of just a handful of executives who had keys to the safe from which the money went missing.

When police searched the casino, they discovered that most of the missing money had simply been transferred from the casino’s safe to another private safe close by, rented by Wu.

Police believe Lim and Wu conspired to move the equivalent of around US$6.5 million into Wu’s safe. They also think Lim instructed another conspirator, identified only as Mr. Oh, to move another US$3.7 million to accommodations in Jeju city where she was staying. This has also been recovered.

It’s believed the remainder of the cash, around US$750,000, was remitted abroad by Oh, a currency exchange worker, who was arrested shortly after the robbery.

Wu denies any wrongdoing, according to Korean press. He claims the money transferred to his safe is his own and was obtained through gambling. He said he went abroad for “personal reasons and not for the purpose of evading the investigation.”

Wu is not currently in custody after a judge turned down the Jeju Police Agency’s arrest warrant application on the grounds that it is possible that it’s his money.

Lim remains a fugitive on an Interpol Red Notice and is believed to be in Dubai.