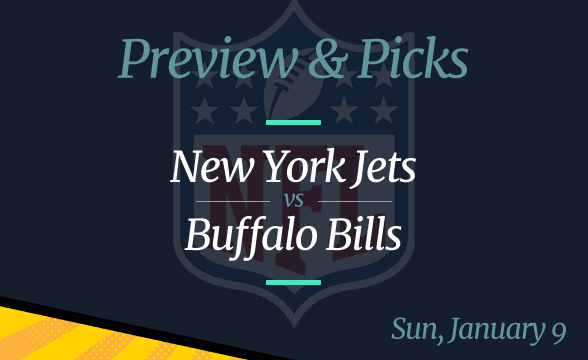 With a win over their interstate rivals in Week 18, the Buffalo Bills would clinch the AFC East title. If they lose on Sunday, they could drop to the #2 place in the division and drop a few spots in the AFC Rankings. Knowing all this, it’s only logical to assume the Bills are going to take the Week 18 game seriously.

Still, knowing that the playoffs are just around the corner, the Bills coach Sean McDermott might decide to go with a more cautious approach in order to ensure no major injuries happen to his key men. If he goes this road, maybe his team is going to struggle against their rivals from the New York State?

All odds are per FanDuel as of January 6.

Are the Jets Thinking of the 2022 Draft?

If the 2021 NFL season was the same as the last one, it would’ve ended last weekend, and the Jets would’ve been the #4 team to pick at the 2022 NFL Draft. However, this season has 18 weeks, which means that there’s still a chance for the Jets to move up or down in the draft order. It all depends on what happens next Sunday.

With a win over the Bills, the Jets could possibly drop to the #6 place in the draft. However, if they lose, which seems like the most probable scenario, they could move up one spot in the queue. Knowing this, you might get to think that the Jets are going to raise a white flag at Highmark Stadium.

However, that might not be the case. The thing is that the Bills are their divisional and interstate rivals. It’s needless to say that the Jets would love nothing better than to finish their 2021-22 campaign with a win over their arch-rivals.

The Bills Need a Win on Sunday

Beating the Jets would mean winning the AFC East title. It would also mean finishing (almost certainly) as the #4 seed in the AFC. On top of everything, winning on Sunday would also mean getting to the playoffs on a four-game win series.

They would love to beat the Jets, but they probably wouldn’t want to risk any injuries. Ahead of Week 18, most of their key men are either 100% fit or are very close to making a full recovery. This is why we might see them take a more conservative approach on Sunday.

This, of course, doesn’t mean they’re going to lose. Their players are just much, much better than those playing for the Jets. Still, we could see the Bills fail to cover the 17-point spread.