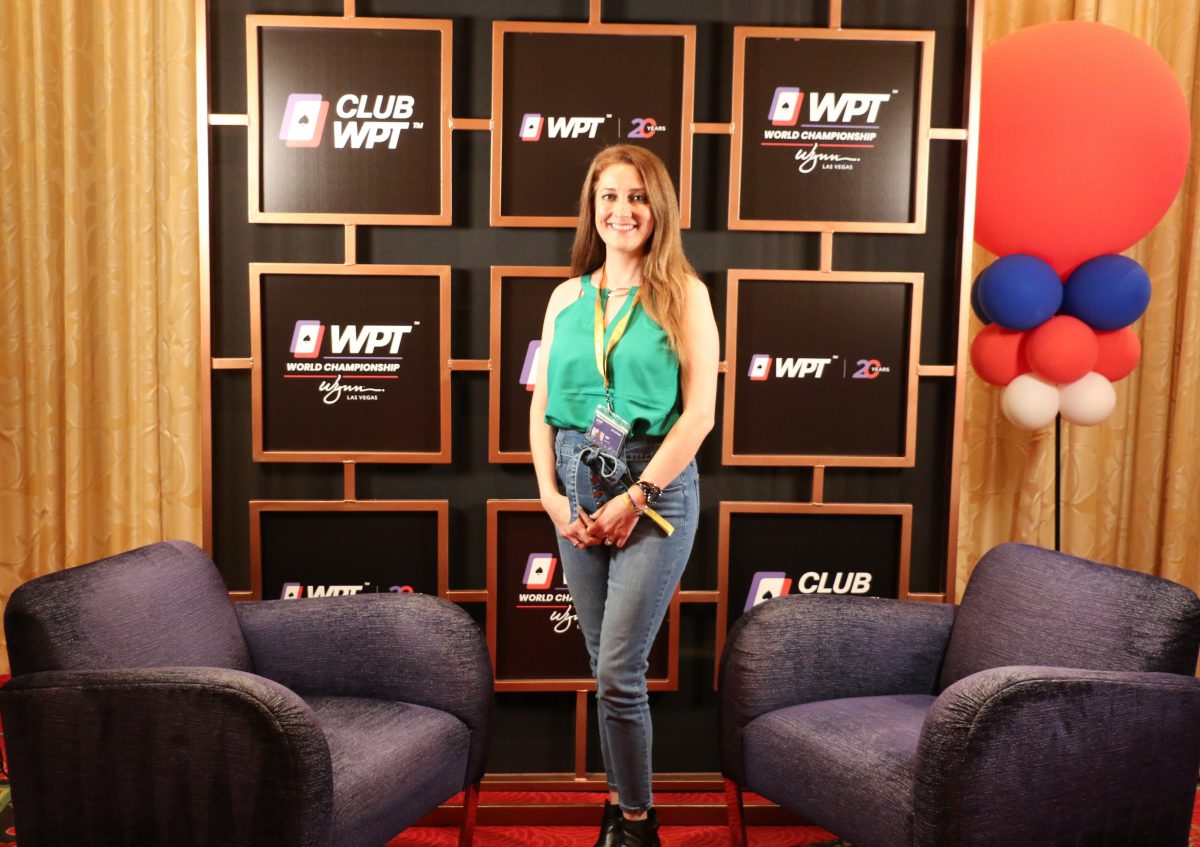 “This is what I want to do for the rest of my life.” Julie Bonz, aka Jules, has a very clear goal and her ticket to the WPT World Championship was the first step toward it.

The WPT World Championship has given Jules a taste of poker at the pro level and it’s something she wants a lot more of. (Image: Daniel Smyth/CardsChat)

Jules won her place in the WPT’s record-breaking event through a social media contest. However, it was her husband, Scott Bonz, who nominated her. Knowing his wife’s passion for poker, Scott entered Jules in Amanda Botfeld’s Twitter giveaway.

Botfeld couldn’t resist the “husband-nominates-wife story,” which meant Jules was heading to Las Vegas for the $10,400 WPT World Championship. CardsChat caught up with Jules during the event to get her story and find out how poker is integral to her life in more ways than one.

“This is definitely a bucket list item for me to play in this amongst all the poker players I’ve watched and admired for years,” Jules told us.

Beyond it being a chance to play with the pros, this amateur saw the WPT World Championship as an opportunity to do more. Jules, an Iranian-American born in LA, is determined to make poker more than a significant part of her life. She wants poker to be her life.

“This is what I want to do for the rest of my life. I remember, right at the beginning, I told my husband that I don’t know how or why or when, but, someday, I want to make my name in poker. I want to do this for a living,” Jules said.

Botfeld would certainly support that. She said Jules would be a “beautiful advocate for women in poker.” That kind of praise isn’t lost on Jules. She understands the challenges women face in poker, and they’re challenges she wants to tackle head-on.

How would she do that? Skyscrapers are built one brick at a time, and Jules believes that one woman inspiring another is the best way to tackle inequality in poker.

She joined an online poker community called Herzdamen. The group hosts weekly meetups and training for women with the aim of increasing participation through collaboration. Jules has always had positive experiences but she knows it’s not the same for everyone. That’s one of the reasons she wants to be more active on the poker circuit.

“I want to play live more often because I believe, it’s about female encouragement. Give women like me a voice and a platform to inspire other women. The more the media outlets that cover us, the more women will see it and feel like they can do it,” said Jules.

That’s that long-term goal, but the immediate aim was to win the WPT World Championship. Jules hadn’t played poker for a while when she won her seat, so she quickly set up some home games. A trip to Riverside Casino was next on the cards, but a bout of flu put the trip on hold.

“I was a little stressed prior to coming here because I didn’t get in as much practice as I wanted. My husband told me it’s probably best because you’re going in with a clean slate, so I let go of the stress and went into excitement mode,” Jules explained.

Oh. Em. GEE! I just bagged my first tournament and it’s at the #WPTWorldChampionship 🌎🤗🥰 is this real life !? “Eeeee” #dointheHopey #mybaby #mamasplayinginday2 🙏💓 pic.twitter.com/7402J4vEiI

The stress didn’t matter too much though as she made Day 2 of the tournament. Poker seems to click for some people, and Jules gets it.

“I don’t know why or how, but for some reason I just picked [poker] up so quickly. I have diagnosed ADHD and poker is literally the first thing in my life that’s held my attention. The first couple of times I played I was like ‘wow,’ I love the game of poker,” she said.

Aside from all the excitement and experiences she’s had at the WPT World Championship, it’s the positive impact on her personal life that’s been so profound for Jules.

“I love the fact you’re always interacting with people. It’s always exciting, it’s always new. There are never two games or situations that are the same. Being ADHD, these dynamics excite me,” she continued.

When you find something in life that gives you more than a simple pleasure, it’s worth sticking with. That’s what Jules intends to do. She wants to live the life of a poker player. She loves the game and, thanks to her time in Las Vegas, she loves the community.

She’s met people here she’d only ever seen on TV. She’s not only met them but enjoyed shared experiences with them. From riding the party bus to Area 15 with WPT CEO Adam Pliska to talking strategy with Daniel Negreanu, Jules has embraced the unique opportunities she’s been given.

“There’s no other experience like this in poker and we’ve been to a lot of events. To have the access to players I looked up to and be able to talk to them has been unreal. It’s truly been a humbling experience,” Jules explained.

We’ve met a lot of people at the WPT World Championship who’ve said the same thing. The experience, particularly for qualifiers, has been surreal. Moreover, it’s opened doors. Jules wants the poker dream to continue and, in my opinion, it should.

The industry needs more people like her. She’s ambitious and enthusiastic. In an age when stoic, solver-based pros are more concerned with optimal plays than optimal experiences, we need something different. Life is about contrasts, and first-timers like Jules bring something different to the mix.

The WPT’s organizers clearly understand this otherwise they wouldn’t have run so many promotions. In this regard, the door has been opened. All people need to do now is walk through. Jules will do that, which is why you’ll probably see her again in the next big event.

“I want the opportunity to prove myself, to show that I can be amongst the pros. I truly feel in my heart that I can fit into this world and make my name in poker. I want it. I just want it,” Jules said.