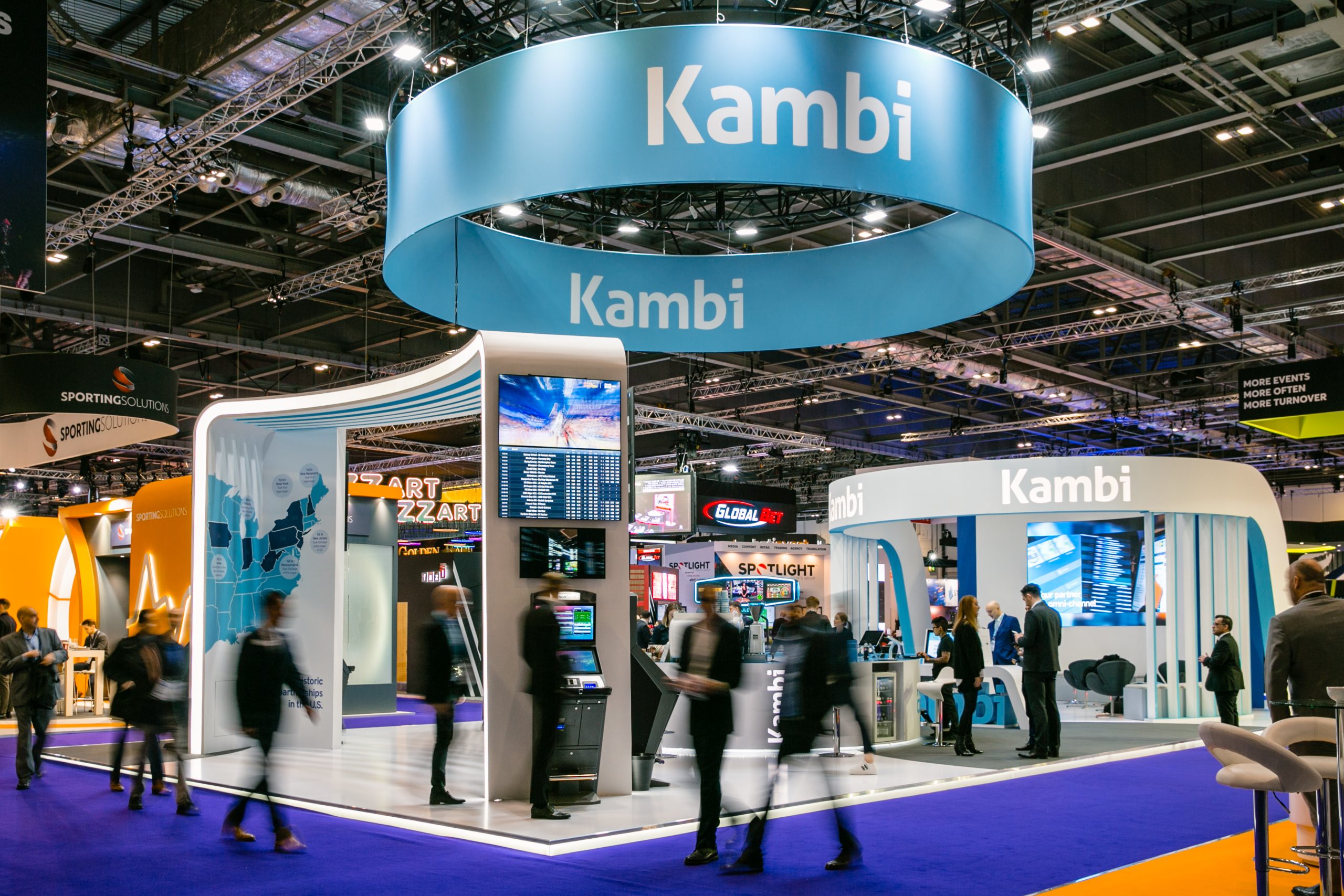 Takeover chatter regarding Kambi Group Plc (OTC:KMBIF) is intensifying. That’s after shares of the sports betting technology provider soared Wednesday, and one research firm has some interesting ideas pertaining to potential suitors.

A Kambi booth at an industry convention. The company is rumored to be a takeover target. (Image: Kambi)

Entering today, Kambi shares were higher by 24% month-to-date. That pace not only soundly trounces an array of other sports betting equities, but it’s stoking speculation suitors are circling the company.

In the most recent edition of its bi-weekly EKG Line report, research firm Eilers & Krejcik Gaming says companies interested in Kambi could run the gamut of private equity firms, to traditional gaming entities, to even a cryptocurrency broker. That group includes familiar names such as Aristocrat, Fanatics, and Las Vegas Sands (NYSE:LVS).

The company has long been on the hunt for B2B assets, and was rumored to have kicked the tires at Evolution earlier this year. On face, Kambi would appear to fit within Sands’ current strategic M.O.,” EKG says of Las Vegas Sands.

LVS has an investment arm aimed at iGaming and sports wagering, but it’s not been an outright buyer of companies, opting rather to make investments in smaller, upstart firms. EKG didn’t mention specific private equity suitors for Kambi. But with the company’s market capitalization of $6.31 billion, it’s easily digestible for any number of private equity shops.

Kambi takeover is sensible because technology assets are still alluring in the sports wagering space. But there’s more to the story.

In February, the Stockholm-listed company did away with a poison pill provision. Companies adopt poison pills in attempts to fend off unsolicited acquisition offers, essentially diluting the aspiring buyer by selling stock to other investors at below-market prices. With that provision gone, Kambi is an easier target for a buyer.

As for other potential suitors mentioned by EKG, Aristocrat is plausible because it lacks business-to-business sports wagering offerings. It also signaled it’s in the mood for deals with a recent attempt, though unsuccessful to acquire Playtech. The research firm also mentions Kindred, the company from which Kambi was spun out.

“The two have remained closely tied since. Kindred has recently stated its ambitions to ‘gain greater end-to-end control of its product,’” notes EKG. “And while an inelegant solution, an in-housing of Kambi would certainly tick that box.”

Adding to that intrigue, Keith Meister’s Corvex Management recently amassed a 10.12% stake in Kindred and is pushing that company to sell itself.

The interesting element regarding that trio is that Rush Street Interactive has been previously mentioned as a buyout candidate, with rumors focusing on ESPN and Fanatics as potential suitors. Fanatics is at the center of a slew of sports wagering mergers and acquisitions rumors. But to date, the company hasn’t made a deal. EKG also notes crypto exchange operator FTX could be a possibility.

“The crypto exchange’s interest in acquiring US online sports betting assets is well known (see, e.g., its failed bid for PlayUp). Kambi would get FTX a core piece of the OSB puzzle, though a FTX-Kambi combination would hardly be turnkey for FTX in the U.S. market, as it would lack OSB market access,” concludes the research firm.