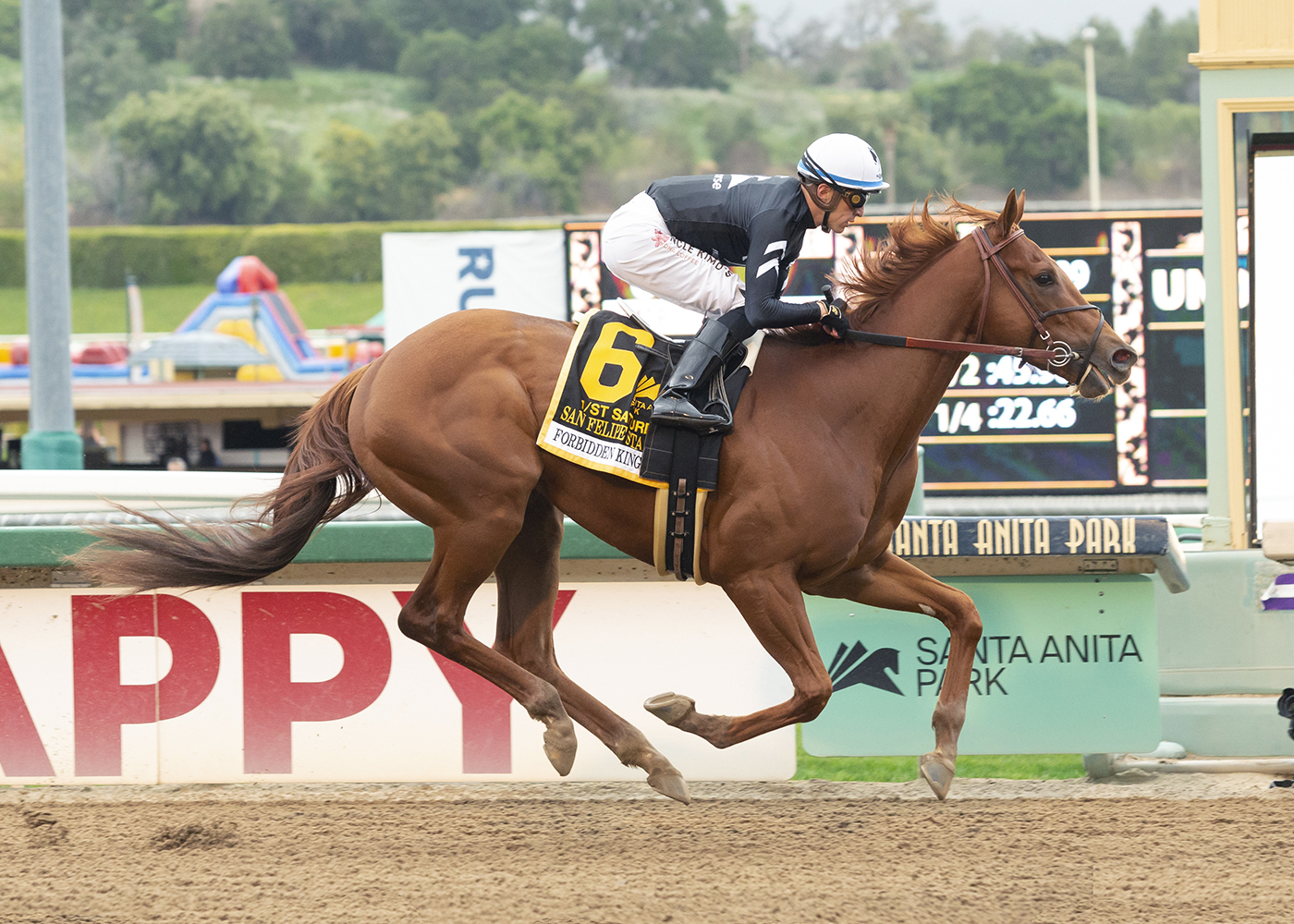 The next-to-last Kentucky Derby future wager pool opened on Friday. So far, bettors agree with oddsmakers, as Forbidden Kingdom is the early favorite among the 23 horses available for betting.

Forbidden Kingdom cruised to victory in the March 5 San Felipe Stakes at Santa Anita Park in California. A week later, the 3-year-old colt finds himself the likely favorite in the fourth round of Kentucky Derby futures betting offered by Churchill Downs. (Image: Santa Anita Park)

While the field of all other 3-year-olds was at 3-1 odds early Saturday, the Richard Mandella-trained colt was at 5-1. That’s the same line Churchill Downs set for the San Felipe Stakes winner on the morning line.

Last weekend, Forbidden Kingdom established himself as the early front-runner after a dominating performance in the Santa Anita stakes race. He led throughout, expanding his lead from two lengths at the quarter-pole to seven lengths at the three-quarters mark.

No other horse really challenged Forbidden Kingdom over the 1-1/16th mile race, and he certainly looked like he had the form to go 1-1/4th miles May 7 in Louisville.

I let him have fun,” jockey Juan Hernandez said after the race last Saturday. “I turned him loose and he never stopped, he kept going the whole race. He proved how good he is today.”

The 50 points Forbidden Kingdom claimed with the win should be more than enough to get him into the Derby. But Mandella has one more prep in mind – the April 9 Santa Anita Derby – as a final tune-up before the Run for the Roses.

People bet futures in hopes of getting some value on a horse they like. While there is risk – it’s certainly possible the horse won’t make the field – that’s offset by what will likely be longer odds than what they would have on the Derby toteboard.

If you’re looking for something a little longer than 5-1, there’s potential to find some quality horses at a good price.

One such candidate may be In Due Time. The Kelly Breen-trained colt finished second behind Simplification in last Saturday’s Fountain of Youth Stakes, his graded stakes debut. His sire is Not This Time, who was a promising 2-year-old and a graded stakes winner in 2016, but had to retire because of injury. He also comes from the bloodline of Curlin, who won the Preakness Stakes and Breeders’ Cup Classic in his career.

Breen said his horse was still getting used to having dirt kicked up in his face. Last Saturday was just his fourth race.

“When he finally got a clear run in at the eighth pole – it probably was the sixteenth-pole – he got outside and he was running the last part,” the trainer said.

In Due Time started 30-1 on the Derby futures morning-line. On Saturday morning, he was at 43-1.

The futures pool is pari-mutuel, so bettors won’t know their odds until the betting window closes at 6 pm ET Sunday. Exacta wagering is also available, as is futures betting on the Kentucky Oaks. The Derby futures lineup and current odds are available here.

Classic Causeway the Favorite in Tampa

There’s only one Kentucky Derby prep race on the docket for Saturday. A dozen horses have been entered for the 1-1/16th mile Tampa Bay Derby at Tampa Bay Downs.

The favorite is Classic Causeway, who won the Sam F. Davis Stakes a month ago at the track. He won with a solid performance, as he was in the lead for nearly all of the race. The three-and-three-quarter length win was his second in four starts. But he’s finished in the money each time he’s taken the track.

Irad Ortiz Jr. will get the mount on the Brian Lynch-trained colt. The 8-5 morning-line favorite, Classic Causeway, will break from the fourth post Saturday.

His two main threats both drew outside gates. Breaking eighth will be Major General (9-2). The Todd Pletcher-trained colt makes his 3-year-old debut. He’s 2-for-2 in his career, but he last raced six months ago. Javier Castellano will ride.

In ninth will be Shipsational (5-1), with Manny Franco aboard. He finished a game second to Classic Causeway in the Sam F. Davis, looking strong down the stretch after getting mired in traffic for most of his graded stakes debut. A cleaner start could make for a more interesting stretch run Saturday evening.

“There were a lot of question marks going in – whether he could get the distance, whether he could get two turns, and it was his first time going against open company,” Shipsational trainer Eddie Barker said after the Sam F. Davis. “He was training like a real professional for the last five weeks.”

Post time for the Tampa Bay Derby is 5:23 pm ET. The full field can be found here.