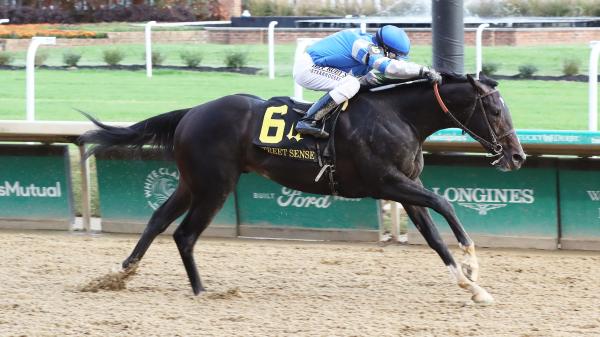 Kentucky Derby Futures: Dusting Off the Crystal Ball for Another Exciting Season

The 38th Breeders’ Cup World Championships is in the books and, although the racing calendar through the rest of 2021 will be less stocked with big-time races than the preceding 10 months, it’s only a brief respite before action picks back up and the focus of owners, trainers, jockeys, horseplayers, fans, and everyone else shifts to the horse racing’s marquee event on the first Saturday in May.

The road to the 2022 Kentucky Derby Presented by Woodford Reserve will, as it always does, take plenty of unexpected twists and turns as contenders rise and fall with each passing prep race. Forecasting the 20-horse field – and even taking an early stand on a potential winner backed by a future wager – is an annual highlight of Derby season, and the bookmakers at William Hill are taking fixed-odds future wagers on Derby 148, which will be held at historic Churchill Downs on May 7, 2022.

As in years past, in this blog we’ll take a periodic look at William Hill’s future-book odds for the Kentucky Derby and profile some of the contenders. (Churchill Downs’ first of five Future Wager pools for Derby 148 will be held from Nov. 25-28.)

Corniche: Talk about a state of limbo. This colt is sitting at 6-1 odds on the latest William Hill book despite having zero qualifying points for the Derby. Bob Baffert is currently banned from participating in both the 2022 and the 2023 Kentucky Derbys after his 2021 Derby winner Medina Spirit tested positive for a corticosteroid that is banned on raceday in Kentucky. Whether Medina Spirit will be removed as the winner of Derby 147 is a process that has taken nearly six months, and it seems destined to take longer still as the Kentucky Horse Racing Commission has yet to issue a ruling and Baffert is almost certain to appeal any DQ. But Churchill Downs has already acted, which means that any horse trained by Baffert won’t be allowed to run in next year’s Derby, and any Baffert-managed horse that finishes in the top four in a Derby prep won’t accrue any points. (That should also mean that Corniche will be absent from Churchill Downs’ first Future Wager pool coming up in about 2 ½ weeks.)

If he were trained by anyone not named Bob Baffert, Corniche would already have 30 Derby points from his win in the American Pharoah Stakes on Oct. 1 and last Friday’s front-running score in the TVG Breeders’ Cup Juvenile Presented by Thoroughbred Aftercare Alliance. He’s a legit Derby contender based on his abundant talent and solid pedigree as a son of good, young sire Quality Road out of a dam, Wasted Tears, who nearly won a million dollars and took down six graded stakes races on turf. But booking 6-1 odds at this stage, even if you set aside Baffert’s persona-non-grata status at 700 Central Ave., would be a rash decision to say the least. Corniche will have to get a new trainer some point to get to the Derby, probably by early January to be safe, and his co-owner Peter Fluor did not seem to be in any hurry to make that tough decision in his post-Breeders’ Cup interviews.

Commandperformance: With Jack Christopher and Rattle N Roll currently sidelined (both missed the Breeders’ Cup Juvenile with injuries), we’ll move on to this physically striking gray or roan son of 2012 Belmont Stakes winner Union Rags. He stalked Corniche’s pace in the Juvenile while three- and four-wide through the backstretch and momentarily appeared ready to make a bid for contention midway through the far turn, but he lacked any closing punch at the top of the lane and instead grinded out a fourth-place finish. In doing so, he basically repeated the efforts from his first two career starts – a closing second in his debut going six furlongs in the mud at Saratoga and then a willing, but nonthreatening runner-up finish to Jack Christopher in the one-turn-mile Champagne Stakes Oct. 2 at Belmont Park. This Repole Stable and St. Elias Stable charge is out of a stakes-placed Tapit mare and should have the stamina to improve as the races get longer, but his Equibase Speed Figure dropped from 100 in the Champagne to 89 in the Juvenile, which isn’t encouraging – especially if you’re getting 30-1 odds to win the 2022 Derby. He’s still one of several to watch trained by Todd Pletcher.

Pappacap: This son of red-hot freshman sire Gun Runner gave a good effort through the stretch in the Juvenile and was rewarded with his second consecutive runner-up finish behind Corniche after the Awesome Again. His only subpar race in five career starts came in the Runhappy Del Mar Futurity, which followed two wins in sprints, including the Best Pal Stakes. Truthfully, that fourth-place effort wasn’t that bad. Pappacap earned a career-best 95 Equibase Speed Figure in the Juvenile. The Florida-bred will have to keep improving, obviously, to join the top tier of Derby horses as the weeks and months pass, but his pedigree should help him travel longer distances as his dam was graded stakes-placed at a mile and an eighth and he’s got some stamina further back in his maternal bloodline (he’s related to a champion stayer, which means long-distance runner in horse lingo, who raced in Peru).

Messier and Winning Map: Here are two more Bob Baffert trainees, so what was written above about Corniche with regard to qualifying for the Derby applies to them as well. They’ve both turned heads in California over the past six weeks with sharp efforts that netted high-90s Equibase Speed Figures: Messier came back from a runner-up finish in his maiden race back in June to dominate by 6 ½ lengths in a three-quarter-mile sprint at Santa Anita Park Oct. 22; and Winning Map won first out by 4 ¼ lengths at Santa Anita, also going six furlongs, on Oct. 3. Messier is an Empire Maker colt with maternal bloodlines that run north of the border, where his namesake first excelled on the ice. His dam, the Smart Strike mare Checkered Past, won the 1 1/16-mile Trillium Stakes at Woodbine twice and he’s related to two Canadian champions a bit further down the page. Winning Map is a son of Breeders’ Cup Dirt Mile winner Liam’s Map, and his dam was a stakes-placed sprinter by Discreetly Mine. A whiff of stamina can be detected deeper in his pedigree, as he’s a relation to millionaire Wanderin Boy, who finished second to champion Bernardini and two years later to Hall of Famer Curlin and in the 1 ¼-mile Jockey Club Gold Cup during the late 2000s.

Howling Time: This Dale Romans-trained colt from the second crop of Not This Time out of the winning Arch mare Werewolf missed Churchill Downs’ first Derby points prep, the Iroquois Stakes; in fact, he debuted a week later under the Twin Spires on Sept. 25. Howling Time rallied from off the pace to win that six-furlong maiden by 1 ½ lengths and appeared to be craving extra distance the way Lon Chaney Jr. craved a full moon. He got both the extra distance and an oh-so-suitable race date for his next start, the 1 1/16-mile Street Sense Stakes on Halloween, and he sat closer to the pace this time under a confident Joe Talamo before separating from the field in early stretch and drawing off in midstretch to a 3 ¼-length victory. Not This Time is off to a solid start as a stallion and Werewolf’s two wins came at about 1 mile and 70 yards on a synthetic main track and then at 1 3/16 miles on turf. Howling Time related to Desert Party, who won the Gulf News U.A.E. Two Thousand Guineas and finished second in the U.A.E. Derby in 2009 for Godolphin before running 14th in the Kentucky Derby. Look for Howling Time to make his next start in the Kentucky Jockey Club Stakes two days after Thanksgiving on Nov. 27. He’s 2-for-2 on the Derby host’s main track and is currently offered at 100-1 odds by William Hill.

Varatti: Another Pletcher horse, Varatti made his debut Sept. 30 at Belmont Park a winning one, contesting the pace in a 6 ½-furlong maiden and opening up in the stretch to win by 4 ½ lengths. He’s owned by WinStar Farm and his breeder, Siena Farm, and is a son of Into Mischief, the popular stallion who is well on his way to leading all North American sires by both winners and progeny earnings for the third consecutive year. Varatti’s dam, the Empire Maker mare Artemis, won at a mile and was runner-up in a Grade 3 stakes at 1 1/16 miles. Dig deeper into his female family tree and things get interesting; Varatti is related to several top-class horses, including third dam (maternal great-grandmother) La Gueriere, a Grade 1 winner on turf at 1 1/8 miles who produced Personal Ensign Stakes winner Icon Project and also the dam of multiple Grade 2 winner and good young sire Munnings. It will be interesting to see whether Pletcher starts this talented colt in an allowance race next or elevates him to stakes competition; I’m betting the former. He’s sitting at 100-1 odds on William Hill’s latest sheet.

Graphic Detail: Another promising Belmont debut winner, this Practical Joke colt won the first race at “Big Sandy” on Breeders’ Cup Saturday, capitalizing on a pace duel between two speed horses to rally late and defeat Triple Elvis (a well-bred Chad Brown-trained colt who had lost to Varatti in that colt’s debut) by a half-length. Graphic Detail earned a decent, but not spectacular 86 Equibase Speed Figure in that race and admittedly picked up the pieces, and his dam, the Dixie Union mare Bayou Miss, was a sprinter, Still, he’s well worth keeping tabs on going forward, especially considering he’s trained by the ultra-patient and knowledgeable Bill Mott. He debuts on William Hill’s Nov. 7 sheet at odds of 150-1.