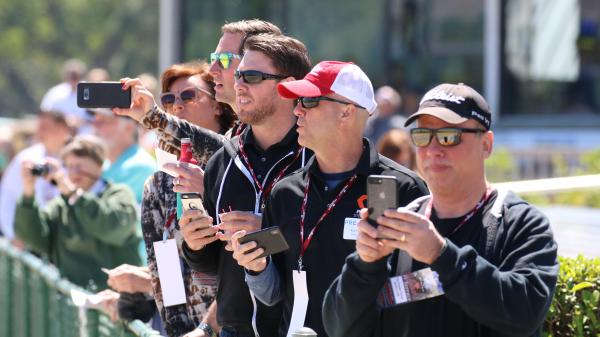 Starting last year and picking up momentum in January, a handful of prospects pointing to the 2022 Kentucky Derby Presented by Woodford Reserve and other Triple Crown races have gained attention by earning qualifying points in stakes around the country or by winning maiden and allowance races.

Since the last edition of this blog four weeks ago, two more qualifying points preps for the Kentucky Derby have been held, and the action will pick up considerably now that the calendar has turned to February, with three more preps scheduled on Feb. 5-6.

The road to the 2022 Kentucky Derby will, as it always does, take plenty of unexpected twists and turns as contenders rise and fall with each passing prep race. Forecasting the 20-horse field – and even taking an early stand on a potential winner backed by a future wager – is an annual highlight of Derby season, and the bookmakers at Caesars Sportsbook by William Hill are taking fixed-odds future wagers on Derby 148, which will be held at historic Churchill Downs on May 7, 2022.

As in years past, in this blog we’ll take a periodic look at William Hill’s future-book odds for the Kentucky Derby and profile some of the contenders. Pool 2 of Churchill Downs’ Derby Future Wager closed on Jan. 23, with the mutuel field “All Other 3-Year-Olds” topping the odds board at 9-5 and Kentucky Jockey Club Stakes winner Smile Happy leading individual horses at odds of 8-1. Pool 3 is set to run Feb. 11-13.

Notable Changes: Call Me Midnight is offered at 65-1 odds by William Hill after upsetting the Jan. 22 Lecomte Stakes at Fair Grounds. The 28.50-1 shot rallied late to edge favorites Epicenter (getting 25-1 at William Hill) and Pappacap (40-1) and earned a career-best 98 Equibase Speed Figure. He has won two of his last three races and figures to be a player in upcoming Derby preps at Fair Grounds for trainer Keith Desormeaux, although his closing running style makes him dependent on a contested early pace. On the positive side, the son of champion sprinter Midnight Lute (who has sired top-class routers) has some good stamina influences in his female pedigree. Learn more about him in Mike Curry’s ABR profile.

Newgrange showed a new dimension in winning the Jan. 29 Southwest Stakes at Oaklawn Park and extending his unbeaten streak. The California shipper, who had won his first two starts at Del Mar and Santa Anita Park by setting or contesting the early pace, rated off the lead in the 1 1/16-mile Southwest and showed admirable courage in deep stretch to draw clear and win by 1 ½ lengths, also earning a career-best 98 Equibase figure. The son of Violence out of an Empire Maker mare is getting 25-1 odds on William Hill’s latest sheet; however, as with all Bob Baffert-trained Kentucky Derby contenders, he did not accrue any qualifying points with the victory due to Churchill Downs’ suspension of Baffert from the 2022 and 2023 Derbys.

The Kentucky Derby is only a bit more than three months away, the prep season is picking up steam, and, after months of inaction, the Kentucky Horse Racing Commission has reportedly set a date in early February to consider whether 2021 Derby winner Medina Spirit should be disqualified due to a medication violation while under Baffert’s supervision. Would a ruling that lets the result stand change Churchill Downs’ position? Highly unlikely. Would taking Medina Spirit down spur litigation? Highly probable. Would a new lawsuit extend well past Derby day? Most definitely. All of those factors make any wager on a Baffert-trained Derby hopeful a risky one indeed.

Of note: Impressive December maiden winner Emmanuel, profiled in the prior edition of this blog, missed a start due to a fever in early January but came back to romp by 4 ½ lengths in a one mile and 40-yard allowance optional claiming race at Tampa Bay Downs on Jan. 30. The Todd Pletcher trainee by More Than Ready earned a 98 Equibase figure and should appear next in a qualifying points prep at either Tampa or Gulfstream Park. His odds at William Hill dropped from 40-1 on Jan. 23 to 28-1 currently.

Tiz the Bomb, a three-time winner from Ken McPeek’s loaded Derby stable, is due to make his first start as a 3-year-old Feb. 5 in the Holy Bull Stakes at Gulfstream. Last seen finishing second in the Breeders’ Cup Juvenile Turf on Nov. 5, the versatile Hit It a Bomb colt has been added to William Hill’s Derby sheet and sits at 40-1 odds.

Forbidden Kingdom: This son of 2015 Triple Crown winner American Pharoah trained by Hall of Famer Richard Mandella rolled to a very impressive win in the seven-furlong San Vicente Stakes at Santa Anita on Jan. 29, defeating Grade 1 winner Pinehurst by 2 ¼ lengths and earning a flashy 106 Equibase figure. He moved to the lead soon after the break, clipped off fast fractions under jockey Juan Hernandez, and had plenty left in the stretch in his first start since finishing second to Messier in the Bob Hope Stakes back in November. Forbidden Kingdom has not raced around two turns yet, but Mandella told Daily Racing Form’s Jay Privman that such a test will soon come, with a start in the 1 1/16-mile San Felipe Stakes March 5 at Santa Anita under consideration. The San Vicente was not a Derby points race; all the same, Forbidden Kingdom is getting 50-1 odds on William Hill’s latest sheet (Pinehurst is at 85-1).

Iron Works: It seems that around this time each year, several horses from Todd Pletcher’s barn turn heads with sharp maiden wins and join the Derby trail, and that’s certainly been the case over the past few weeks in Florida. Iron Works won at first asking Jan. 8 at Gulfstream, taking a six-furlong maiden by a widening four lengths after pressing the early pace (90 Equibase Speed Figure). This colt is by the pensioned Distorted Humor (sire of 2003 Derby winner Funny Cide) and is out of an Indian Charlie mare who won at 1 1/16 miles and finished third in the 2015 Grade 1 Central Bank Ashland Stakes at the same distance. His second dam (maternal grandmother) won a stakes at 1 1/16 miles and earned more than $600,000 on the track. Iron Works carries 100-1 odds via William Hill.

Volcanic and Charge It: Later on the same Jan. 8 card at Gulfstream, two other promising colts threw it down in a maiden race going one mile around one turn for Hall of Famers Mark Casse and Pletcher. Volcanic, trained by Casse, contested a solid pace a with Charge It soon after the start, and the two battled gamely through the turn and then the stretch as well before Volcanic, racing to the outside of his foe, prevailed by a neck. They both earned Equibase Speed Figures of 94, but winner Volcanic currently sits at 150-1 odds on William Hill’s sheet while Charge It is at 75-1.

That disparity is likely due to the fact that Volcanic won in his fourth career start – and first since finishing seventh in the Grade 1 Hopeful Stakes last summer at Saratoga – while Charge It just missed winning in his career debut. Charge It also has a pedigree more suited for Derby dreaming, as he’s a son of leading sire Tapit and is from an accomplished female family anchored by second dam Take Charge Lady, who earned $2.4 million as a top-class racemare in routes back in the early 2000s. Take Charge Lady is the dam of such notables as 2013 champion 3-year-old colt, Travers Stakes winner, and Breeders’ Cup Classic runner-up Will Take Charge and 2012 Florida Derby winner Take Charge Indy.

Volcanic’s pedigree is no slouch, however, as he’s by good young sire Violence and is bolstered by his dam’s side, which includes Breeders’ Cup turf winners Shared Account and Sharing.