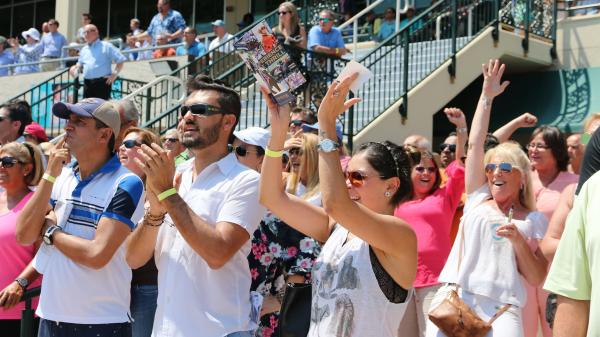 During December and on New Year’s Day, a handful of prospects pointing to the 2022 Kentucky Derby Presented by Woodford Reserve and other Triple Crown races gained attention by earning qualifying points in stakes around the country or by winning maiden and allowance races all across the country.

Since the last edition of this blog four weeks ago, six qualifying points preps for the Kentucky Derby have been held, including three on New Year’s Day. Those results have obviously made an impact on the points leaderboard for the Derby, and have done so, albeit to a lesser extent, on the future wager sheets as well.

The road to the 2022 Kentucky Derby will, as it always does, take plenty of unexpected twists and turns as contenders rise and fall with each passing prep race. Forecasting the 20-horse field – and even taking an early stand on a potential winner backed by a future wager – is an annual highlight of Derby season, and the bookmakers at William Hill are taking fixed-odds future wagers on Derby 148, which will be held at historic Churchill Downs on May 7, 2022.

As in years past, in this blog we’ll take a periodic look at William Hill’s future-book odds for the Kentucky Derby and profile some of the contenders. Pool 2 of Churchill Downs’ Derby Future Wager runs from Jan. 21-23, covering the weekend when the next qualifying points prep will be held: the Lecomte Stakes at Fair Grounds on Jan. 22.

Notable Changes: Despite heavy activity over the past month, none of the recent Derby prep winners cracked the top five on William Hill’s latest sheet. Slow Down Andy, who upset 1-2 favorite Messier in the Los Alamitos Futurity on Dec. 11, sits at 50-1 as of Jan. 2. Learn more about him in Mike Curry’s ABR profile. He’s in the more than capable hands of two-time Derby-winning trainer Doug O’Neill and, in fact, is a son of 2016 victor Nyquist, who raced for Slow Down Andy’s owner-breeder J. Paul Reddam.

Remington Springboard Mile winner Make It Big is 3-for-3 and lived up to his 13-10 favoritism when sent to Oklahoma as he won by a half-length after dominating two races restricted to Florida-breds at Gulfstream Park. Still, he’s getting 100-1 odds at William Hill, due in part to his working-class pedigree as a colt by Grade 3 winner Neolithic. That horse earned more than $2.27 million on the track, but $2 million of those earnings came in the inaugural Pegasus World Cup and then, two months later, the 2017 Dubai World Cup when he finished third twice to Arrogate (beaten by a combined 15 ½ lengths).

Among the recent prep winners, Epicenter is rated highest by William Hill at odds of 25-1, placing him in a tie with Remsen Stakes runner-up Zandon at no. 6 on the odds leaderboard. As with Slow Down Andy, this colt has top-flight connections (owner Winchell Thoroughbreds and trainer Steve Asmussen) and looks to be developing very nicely based on his 6 ½-length score in the inaugural Gun Runner Stakes on Dec. 26, albeit against modest competition. He’ll be a major player on the Fair Grounds circuit and should resurface at the end of this month in the Lecomte Stakes. Read more about him in this contender profile.

The three New Year’s Day winners – Courvoisier (Jerome Stakes at Aqueduct), Dash Attack (Smarty Jones Stakes at Oaklawn Park), and Newgrange (Sham Stakes at Santa Anita Park) – carry odds of 100-1, 75-1 and 35-1, respectively. Courvoisier has a pedigree that heralds “Derby winner” from on high as he’s a son of Tapit whose dam (mother) was champion filly Take Charge Brandi, making him a close relative to Omaha Beach (a recent standout who was the Derby favorite in 2019 before he was sideliined shortly before the draw), 2013 champion 3-year-old male Will Take Charge, and several other outstanding route horses. However, as Mike Curry notes in his latest Derby contender profile, this Kelly Breen-trained colt will have to boost his speed figures substantially to claim a spot among the leading Kentucky Derby contenders.

Dash Attack was another visually impressive winner, taking the Smarty Jones by a rallying two lengths in the slop. That made him 2-for-2 in his career, both wins coming at one mile around Oaklawn’s two turns. He paired his debut Equibase Speed Figure of 84 in the Smarty Jones and obviously more improvement will be needed in the weeks ahead. His pedigree also takes a backseat to several other current prospects … but his trainer, on the other hand, is the red-hot Ken McPeek, who also conditions Rattle N Roll, Smile Happy, and Tiz the Bomb. The last of these excelled on turf for McPeek in fall 2021 but will return to dirt soon in a Derby prep; he’s not currently offered on William Hill’s sheet.

As for Newgrange, he also extended his career unbeaten streak to two with a sharp, front-running 2 ¾-length win in the Sham over stablemate Rockefeller (55-1). But those horses, along with Corniche, Messier, and several more Bob Baffert-trained runners on William Hill’s book, won’t be running in the Derby unless their respective owners move them out of Baffert’s barn. No one has taken the initial step of hanging a “Under New Management” sign over their Derby charge’s stall as of yet. It will be interesting to see if an owner breaks solidarity as the prep season rolls on, and when they do so.

Three to Watch – A Focus on Gulfstream:

Simplification: Like Epicenter, this colt is a son of 2021 leading second-crop sire Not This Time. He earned an impressive 100 Equibase Speed Figure on New Year’s Day when winning the one-turn-mile Mucho Macho Man Stakes at Gulfstream Park by four lengths over odds-on favorite Strike Hard. Simplification rolled to a 16 ¾-length win in his second career start back in October, a six-furlong race restricted to Florida-breds at Gulfstream, but then disappointed at 3-10 odds in another sprint at the Hallandale, Fla., track on Nov. 13 when a well-beaten third. He shook that effort off admirably in the Mucho Macho Man and was never threatened after moving to the lead early under Javier Castellano. Simplification is trained by Antonio Sano, who’s best known for his handling of $5.5 million earner Gunnevera a few years back. That horse made some noise on the 2017 Derby trail at Gulfstream, winning the Xpressbet Fountain of Youth Stakes and hitting the board in two other preps, and Simplification has a chance to achieve similar results. His pedigree is solid as he’s related to Hall of Famer Ashado and some other good ones on his dam’s (mother’s) side. He’s sitting at 110-1 odds on William Hill’s Jan. 3 sheet, and Mucho Macho Man runner-up Strike Hard is offered at 135-1.

Emmanuel and American Icon: Both of these colts are owned by WinStar Farm and Siena Farm, trained by Todd Pletcher, and posted eye-catching maiden wins at Gulfstream in December. Emmanuel, offered at 50-1 odds by William Hill, took the rail path to a 6 ¾-length score going Gulfstream’s one-turn mile on Dec. 11, good for an impressive first-out 96 Equibase Speed Figure. Breaking from the inside post, he set a contested early pace but moved clear entering the far turn and then found another gear in early stretch, powering home under Luis Saez with his ears pricked. Emmanuel is a son of veteran sire More Than Ready, who has a reputation for versatility but has never sired a winner of a Triple Crown race (although his son Catholic Boy did win the 1 ¼-mile Travers Stakes in 2018). Emmanuel’s pedigree does have some stamina as his unraced dam is a daughter of 2007 Kentucky Derby and Breeders’ Cup Classic runner-up Hard Spun and is a half-sister (same sire [father], different dam [mother]) to Hawkbill, a $4.7 million earner who mainly competed in long-distance turf races, and also to two-turn Grade 1 winner Free Drop Billy. UPDATE: Emmanuel was slated to make his second start in a one mile and 40-yard allowance optional claiming race on Jan. 7 at Tampa Bay Downs, but was reported as scratched that morning.

American Icon debuted on Dec. 26 at Gulfstream in a seven-furlong race, and he also controlled matters early under Saez, breaking swiftly from the outside post and never facing a serious challenge through the turn or in the stretch. He scored by 8 ½ lengths and earned an Equibase Speed Figure of 91, but overall, I thought his opening effort was less impressive than Emmanuel’s as Saez had to ask him for run at the quarter-pole and he appeared to drag for a few strides in midstretch, perhaps tiring a bit. Nevertheless, he along with Emmanuel (and a few other Pletcher trainees, for that matter) should be players in upcoming Florida-located preps starting with the Holy Bull Stakes at Gulfstream on Feb. 5. American Icon is getting 100-1 odds at William Hill; he’s a son of 2017 Horse of the Year and 2021 runaway leading freshman sire Gun Runner, but the bottom half of his pedigree is a bit suspect as his dam, by the middle-distance horse Sky Mesa, was stakes-placed twice at Woodbine in sprints.