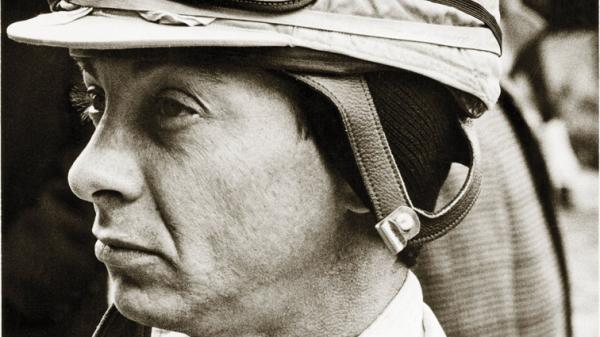 You can count on the fingers of two hands the number of jockeys that have won three or more Kentucky Derbies, and the list is a “who’s who” of great riders. Gary Stevens, Kent Desormeaux, Calvin Borel, Victor Espinoza, Angel Cordero Jr., Isaac Murphy and Earl Sande have all won three Derbys, and Bill Shoemaker went one better by winning four. But standing together in the annals of Derby history are the two jockeys who have won five Derbys each: Eddie Arcaro and the legendary Bill Hartack.

Born in Pennsylvania in 1932, Hartack was an exercise rider for several years before he started riding in races at Waterford Park – now known as Mountaineer – where he earned his first win in 1952. Hartack started off slowly, winning just a handful of races that year, but in 1953 he emerged in spectacular fashion. Riding an incredible average of nearly one winner every day, Hartack dominated racing throughout West Virginia then stepped up to the big leagues in 1954 and was equally successful. By riding so many winners, his reputation began to spread, and before long, he was riding not only a high quantity of horses, but high quality horses as well.

Everything came together for Hartack in the mid-1950s. From 1955-1957, he was the leading rider in the nation by races won, visiting the winner’s circle a remarkable 1,105 times while winning 26 percent of his races. Even more significant was the fact that he led all jockeys by money won in 1956 and 1957, when his mounts earned $2,343,955 and $3,060,501. Until Hartack came along, no jockey had ever amassed more than $2 million in purse earnings in a single year. Hartack not only smashed that record, but he reached $3 million as well.

Hartack’s debut in the Kentucky Derby also came in 1956, and he wasted little time finding success. His first ride came aboard Fabius; they finished second behind Needles before turning the tables on that rival in the Preakness Stakes to give Hartack his first win in a Triple Crown race.

The following year, Hartack went one better and won the Kentucky Derby in a monumental upset aboard Iron Liege, triumphing by a nose when jockey Bill Shoemaker – riding runner-up Gallant Man – misjudged the finish line and briefly stood up in his saddle.

Three years later in 1960, Bill Hartack won the Derby again aboard Venetian Way, but when that colt disappointed in the Preakness Stakes, Hartack jumped ship to ride Celtic Ash in the Belmont Stakes. The result? A 5 ½-length victory over Venetian Way, meaning that Hartack had won two-thirds of the Triple Crown aboard two different horses.

That year also marked the fourth year in Hartack’s career that he led all jockeys by races won, guiding his mounts to 307 victories. But a still greater achievement wasn’t far off. His next two mounts in the Kentucky Derby were Decidedly in 1962 and Northern Dancer in 1964, and Hartack rode both of them to victory. This gave Hartack three winning Derby rides in a row (although not in consecutive years), an achievement that hasn’t been equaled before or since.

Hartack’s ride aboard Northern Dancer in the Kentucky Derby exemplified what made him such a great jockey. Some believed that Northern Dancer didn’t have the stamina to handle the 1 1/4-mile distance of the Derby, and the colt’s regular rider – Bill Shoemaker – gave up the assignment in favor of riding Derby favorite Hill Rise. With Hartack in the saddle, Northern Dancer proved his doubters wrong, saving ground early on before shifting outside and getting the jump on Hill Rise turning for home. With powerful strides, Northern Dancer opened up a two-length lead with a furlong to go, then tenaciously held off Hill Rise’s late rally to win by a neck in a then-track-record time of 2:00 flat.

Hartack also guided Northern Dancer to victories in the Preakness Stakes and Queen’s Plate Stakes – the Canadian equivalent of the Kentucky Derby – as well as a third-place finish in the Belmont Stakes.

Thereafter, Hartack’s incredible streak of Triple Crown success slowed down a bit, but a horse named Majestic Prince helped him re-enter the spotlight. After going unbeaten in seven starts, Majestic Prince was favored to win the 1969 Kentucky Derby, but ended up needing every bit of Hartack’s skill as a jockey to prevail.

Majestic Prince would prove to be Hartack’s last major hurrah as a jockey. He rode in three more Derbys without success, bringing his overall Derby record to an astonishing five wins from 12 starts. Hartack ended his U.S. riding career with 4,272 wins from 21,535 races. Maintaining the low weight necessary to be a successful jockey in the U.S. had become a challenge for Hartack, so he shifted his tack to Hong Kong – where horses carry more weight – and rode there for several years until retiring from the sport in 1980.

Horse racing was more than just a business to Hartack, it was a passion. After retiring from the saddle, he remained deeply involved in the sport, working as a racing official and steward at tracks across the country until he passed away in November 2007, just before his 75th birthday.

Perhaps Joe Hirsch said it best when speaking of Hartack in his book The First Century: Daily Racing Form Chronicles 100 Years of Thoroughbred Racing: “[Hartack] wanted to win them all. Every one. It was no act; no pose. … He ran each race in his mind with great objectivity, and if he thought he should win and didn’t, he was upset.”

In other words, Hartack was the consummate professional, and wanted to do his job as well as he possibly could. That work ethic made him one of the greatest jockeys of all time.

This feature was originally published in 2015 and has been updated.