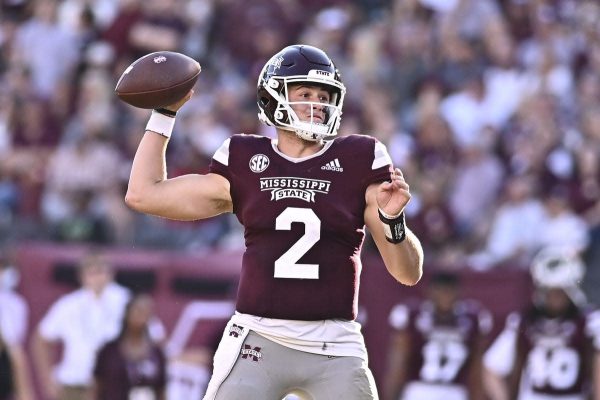 Two SEC squads trending in opposite directions meet in Lexington, Kentucky on Saturday night when the explosive Mississippi State Bulldogs (5-1) visit the Kentucky Wildcats (4-2). Mississippi State is coming off a 40-17 blowout victory over SEC West rivals Arkansas, while Kentucky has lost two consecutive games, including a 24-14 defeat to an average South Carolina team. Kickoff is set for 7:30 PM at Kentucky’s Kroger Field.

Senior quarterback Will Levis’s status will be key for this one. Levis missed the last game through injury, but is questionable for Saturday’s game and is expected to play. The Wildcats are 4-1 with Levis starting, 0-1 without Levis.

Despite their impressive 5-1 record on paper, Mississippi State is struggling on D. The Bulldogs are giving up 21.8 points per game, and they allow 215 passing yards (57th in the nation) and 117 rushing yards (40th in the nation) per game.

Three straight Mississippi State games have hit the over, and we’re going for number four in this matchup against Kentucky. Mississippi State is in that unique situation of having both a very productive offense and a very average defense. Mike Leach’s air raid offense is putting up 38.5 points per game so far this season, and has put up 40+ in each of their last three games. This Bulldogs offense is built to score points, and they do so through the air. As a result, they are either pointing points on the board, or hardly taking any time off of the clock, which bodes well for the Over in this one.

More good news for Over bettors, Kentucky quarterback Will Levis took first team reps in practice this week, and it looks like he will be active for the first time since September 24th. The Wildcats are averaging 28.8 points in the five games Levis starts, and they are without a doubt a much more fluid team offensively with the senior Levis under center. Considering this Mississippi defense has given up 200+ yards on the ground twice already this season, don’t be surprised if Kentucky chooses to establish the run before opening up the passing game. This Bulldogs defense hasn’t proven themselves capable of stopping anyone so far this year, and this Kentucky offense with Levis starting will be one of the more efficient and dangerous squads they’ll match up against all year.

Over 49 points is the bet on this one, and frankly we might see significantly more points than that in this one. Mississippi State is picking up steam on the offensive side of the ball as the season progresses. Will Rogers is hitting his stride and has to be considered as one of the best QB’s in the country so far, and his numbers prove it. With Levis back for Kentucky, the Wildcats will have no problems moving the ball up the field either. A high scoring shootout could unfold in Lexington on Saturday, as two of the SEC’s best quarterbacks lead their teams in what should be an exciting matchup.

While it’s tough to say who to take on the moneyline in this one, it’s fairly safe to say that Kentucky will keep this one close. After that disappointing conference loss to South Carolina last week, and another conference loss to Ole Miss the week before, it’s not an overstatement to say that the season is on the line on Saturday against Mississippi State. Look for a major bounceback response from Kentucky, who will keep this one within 4 points or better. With the Wildcats sitting at really good plus money, it’s hard not to go with the hungry home team at underdog odds. This spread seems like a safe play though, as Will Rogers and his Bulldog offense has been potent leading up to this matchup. You can bet this pick at one of the internet’s very best sportsbooks.

This is truly an intriguing matchup in the SEC, and it’s a tough one to predict. Mississippi State’s path to victory will be to rely on a big night of production from their offense, as their defense is anybut reliable. Kentucky is being heavily undervalued by the bookies due to their recent performances, but don’t sleep on these Wildcats at home. There is no such thing as an easy road game in the SEC, and the fact that the bookies have Mississippi State as -4 favorites is surprising. Stay away from the moneyline in this one, and go Over 49 points and Kentucky on the spread. Keep an eye on the injury report though, and stay away from this game as a whole if Kentucky QB Will Levis is ruled out of this game due to injury!

2022-10-13
Previous Post: Podcast – Veganmav – Gambling With An Edge
Next Post: Spooky Graves Online Slot from GameArt • This Week in Gambling