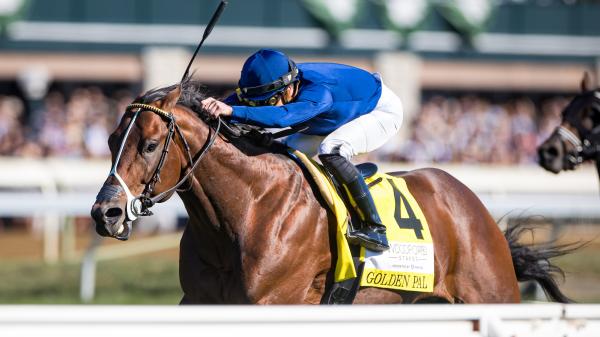 Tom Pedulla presents five key takeaways from major races at Keeneland Race Course, Belmont at the Big A and Santa Anita Park on Saturday as some of the nation’s top horses took their final step toward the Breeders’ Cup World Championships on Nov. 4 and 5 at Keeneland.

BEATING THE BOYS: War Like Goddess, with new pilot Jose Lezcano aboard, passed her first test against males with relative ease when she rallied for a 2 ¾-length victory in the $500,000 Joe Hirsch Turf Classic Stakes at Belmont at the Big A. The impressive field included three other Grade 1 winners. The 5-year-old English Channel mare won for the ninth time in 12 career starts while hiking her earnings past $1.6 million. Bill Mott, her Hall of Fame trainer, was sufficiently impressed to give her another shot against males in the Longines Breeders’ Cup Turf. “I always thought she belonged. There are good horses and she could get outrun, but I think she deserves an opportunity for sure,” said Mott. “I don’t think we’re out of line whatsoever.”

RIGHT CALL: Owner Peter Brant wanted In Italian to be as fresh as possible for the Maker’s Mark Breeders’ Cup Filly and Mare Turf. Trainer Chad Brown thought she would benefit from a race between the Diana Stakes in July at Saratoga and the $750,000 First Lady Stakes Presented by UK HealthCare at Keeneland. Brown conceded the point to Brant and is grateful he did after In Italian, ridden by Joel Rosario, bested stablemate Regal Glory to give her trainer his fifth consecutive First Lady victory. “She overcame the layoff and got a good prep she needed going forward,” Brown said. As for his First Lady winning streak, Brown said, “It means I’ve had a lot of good horses sent to me by good owners and great people I’m working with. That’s what it comes down to.”

PERFECTION: Golden Pal will take a perfect 4-for-4 record at Keeneland into the Breeders’ Cup Turf Sprint there after he rolled gate to wire in the $350,000 Woodford Stakes Presented by FanDuel. He blazed through 5 ½ furlongs in a stakes-record 1:01.39 for Irad Ortiz, Jr. The impressive victory came as a relief to trainer Wesley Ward. “Every time he runs, I get kind of nervous because he’s so exceptional,” he said. “We’re real excited now to get on to the Breeders’ Cup. We got our prep into him here on his home track at Keeneland. Twenty-eight days from now, we’ll be ready to roll.”

BOUND FOR JUVENILE: The FanDuel Breeders’ Cup Juvenile has a clear favorite, and his name is Cave Rock. Trained by Hall of Famer Bob Baffert and ridden by Juan Hernandez, the son of Arrogate dominated for the third time in as many starts with a front-end 5 ¼-length romp in the $300,000 American Pharoah Stakes at Santa Anita. Success in his first two-turn try came in a “Win and You’re In” race that earned him fees-paid entry into the Nov. 4 Juvenile, the centerpiece of the first day of world-class racing at Keeneland. Cave Rock has swept his first three starts by a combined 16 ½ lengths. He was followed by stablemates National Treasure, Hejazi and Gandolfini. “The really good ones come around quickly and he’s always been different,” Baffert said of Cave Rock.

NEW MEXICO-BRED SHINES: New Mexico-bred runners are far from a common sight at the Breeders’ Cup. In fact, Ricks Natural Star, who competed in the 1996 Turf at Woodbine, has been the only New Mexico-bred to get that far. Now, trainer Todd Fincher has two such horses bound for the season-culminating championships after Slammed secured a fees-paid berth in the Filly and Mare Sprint when she captured the $350,000 Thoroughbred Club of America Stakes at Keeneland. “I’m just the trainer. The horses are the superstars,” said the self-effacing Fincher, 51. Slammed joins stablemate Senor Buscador, who won the Ack Ack Stakes at Churchill Downs on Oct. 1 and is pointed to the Big Ass Fans Breeders’ Cup Dirt Mile.