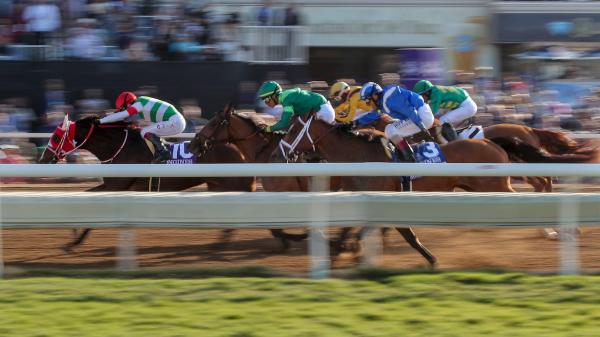 HISTORIC BREAKTHROUGH: Future Japanese participation will be greatly encouraged after Loves Only You split horses during a daring late run to capture the $2 million Maker’s Mark Filly and Mare Turf and earn her place in history as the first Japan-based horse to win a Breeders’ Cup race. The 5-year-old daughter of the late sire Deep Impact was trained by Yoshito Yahagi and masterfully ridden by Yuga Kawada to edge My Sister Nat by half a length. DMM Dream Racing director Takumi Nomoto, speaking through an interpreter, said of the decision to compete, “We’ve had so many horses challenge in the Breeders’ Cup, but we’ve never had a victory at the Breeders’ Cup. That’s why I felt like it was a challenge to come in here, and we got the big win.”

HISTORIC BREAKTHROUGH II: Three races after Loves Only You provided Japan with its first Breeders’ Cup triumph, it can be argued that an even more significant moment occurred when Marche Lorraine became the first Japan-based horse to succeed on dirt in the 38-year history of the Breeders’ Cup by pulling a shocking upset in the $2 million Longines Distaff. Japan’s turf program is well ahead of what it has accomplished on dirt. Although a scorching speed duel set up things perfectly for Marche Lorraine, the Japanese now know they can beat the United States at its own game and figure to be all the more eager to take on that challenge in the years ahead. Marche Lorraine, also trained by Yahagi, rewarded her few faithful with the second-largest payout in Distaff history – $101.80 for a $2 win wager. “I tried to ignore her odds and just give her every chance in the run and, hopefully, she could finish it off,” said winning jockey Oisin Murphy. “And, to be honest, we were obviously a hostage to fortune. I sat out the back and they went quite quick. So we needed them to do that, but it was a brilliant performance.”

PEGASUS-BOUND?: Gulfstream Park officials are optimistic that the Pegasus World Cup Invitational set for Jan. 29 will feature a clash between Longines Breeders’ Cup Classic winner and certain Horse of the Year Knicks Go and authoritative Big Ass Fans Dirt Mile winner Life Is Good. Trainer Brad Cox indicated a title defense in the $3 million Pegasus will likely mark the career finale for Knicks Go. “If he comes out of it good and trains well, we’ll point for the Pegasus,” Cox said. “It’s a good purse, it’s a surface he likes and, if he’s doing well, there have been horses that won the Breeders’ Cup and ended their careers with that, between the likes of Gun Runner and City of Light. It’s always a nice race that you can pick off, hopefully, before going off to stud.” Trainer Todd Pletcher kept his options open, but he said the Pegasus represented the second half of a two-race plan for equally brilliant Life Is Good.

RECORD BUSINESS: The Breeders’ Cup World Championships, which attracted a record number of international pre-entries, have arguably never been healthier. Total all-sources common-pool handle for the two-day event at Del Mar reached a record $182,908,409. The figure represents a 4.7 percent increase over the prior record of $174,628,986, set at Santa Anita Park in 2019, and a 14 percent jump from the total handle of $160,472,893 last year as the COVID-19 pandemic dramatically impacted the season-ending championships at Keeneland. Drew Fleming, Breeders’ Cup president, was ecstatic with the results. “The Breeders’ Cup is a truly global event with winners this weekend bred, raised and raced on three different continents,” he noted.

BEST OF BEST: As great as many of his fellow riders are, Irad Ortiz, Jr. continues to separate himself from the pack. He has rattled off three consecutive Eclipse Awards as the nation’s leading rider and now has won the Bill Shoemaker Award as the outstanding jockey at the Breeders’ Cup four times in a row. Ortiz, Jr. started fast, taking the first Cup race aboard Twilight Gleaming in the Juvenile Turf Sprint on Future Stars Friday and made no mistakes with a pair of favorites the next day, the aforementioned Life Is Good in the Big Ass Fans Dirt Mile and Golden Pal in the Turf Sprint. British jockey William Buick also was aboard three winners, all for Godolphin and trainer Charlie Appleby, but Irad Ortiz won the award by riding a runner-up as well over the weekend. Irad’s younger brother Jose Ortiz ensured a great weekend for the siblings when he reached the winner’s circle with Pizza Bianca (Juvenile Fillies Turf) and Aloha West (Qatar Racing Sprint).