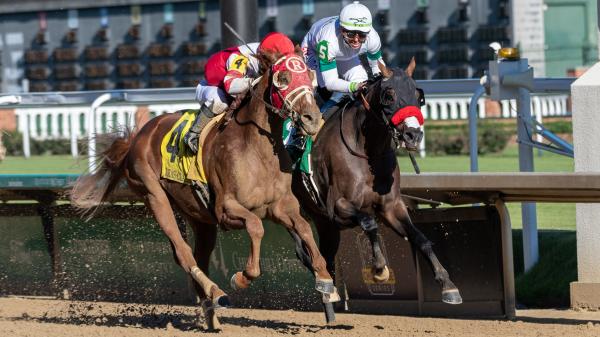 Tom Pedulla presents five key takeaways from major races at Belmont at the Big A and Churchill Downs on Saturday as some of the nation’s top horses prepared for the Breeders’ Cup World Championships on Nov. 4 and 5 at Keeneland.

MEASURED VICTORY: Although the “wow” element was missing, Life Is Good got the job done for jockey Irad Ortiz Jr. in the $465,000 Woodward Stakes, held at Belmont at the Big A. He showed he could handle extremely wet conditions while fending off ultra-game Law Professor by 1 ¼ lengths. Life Is Good covered the mile-and-an-eighth distance in 1:49.57 in a gate-to-wire decision. “This was one of those where there is only one satisfactory outcome, and that’s to win,” said trainer Todd Pletcher. “We wanted to make sure we did that while also keeping in mind that we have a bigger goal in five weeks.” That, of course, will be the highly-anticipated showdown between East Coast star Life Is Good and undefeated West Coast superstar Flightline in the $6 million Longines Breeders’ Cup Classic.

ALL HEART: Remarkably consistent Hot Rod Charlie staged yet another memorable display of courage when he re-rallied along the rail to deny hard-charging Kentucky Derby Presented by Woodford Reserve winner Rich Strike by a head in the $498,000 Lukas Classic Stakes at Churchill Downs. “Tyler (Gaffalione) gave him a great ride. He’s one of those type of horses that I’d love to have blinkers on him for half the race and take them off for the other half. It was an incredible effort,” said trainer Doug O’Neill, adding, “He is a great horse and we’re so lucky to have him.” Hot Rod Charlie won for the fifth time in 18 career starts with six second-place finishes. He has failed to hit the board only four times. The winner’s share of the hefty purse increased his earnings to $5,556,720.

RESPECT: No one can dismiss 80.80-1 Kentucky Derby champ Rich Strike as a one-hit wonder any more. Not after the improvement he showed in the Runhappy Travers Stakes, when he finished fourth but only a head behind runner-up Cyberknife, and certainly not after his enormous effort for regular rider Sonny Leon in the Lukas Classic in his first test against older horses. “It was a tough beat, but we are so proud of the step forward our horse took (Saturday),” said trainer Eric Reed. “It was a big ask of him to run against these type of older horses and he proved he is just as talented. He was little bit closer to the pace (Saturday), but he was still able to fight hard to the wire.”

SUCCESSFUL AUDIBLE: Trainer Chad Brown was so pleased with how well Blazing Sevens was doing that he decided to run him in the one-mile, $500,000 Champagne Stakes on Saturday at Belmont at the Big A rather than the 1 1/16-mile Claiborne Breeders’ Futurity a week later at Keeneland. “I was dying to get him around two turns, but I would rather have the five weeks’ rest and not four,” Brown explained. Then he watched in dismay as the remnants of Hurricane Ian created a sloppy, sealed track at Aqueduct. Blazing Sevens had run third in the Sept. 5 Hopeful Stakes under similar conditions. This time, though, the son of Good Magic splashed home an authoritative 3 ¼-length victor in a “Win and In” race for the $2 million FanDuel Breeders’ Cup Juvenile on Nov. 4 at Keeneland. It may bode well that Good Magic captured the 2017 Juvenile.

UNCOMMON PATH: From New Mexico to the Breeders’ Cup is not a route normally traveled, but Senor Buscador made it work for owner Joey Peacock, Jr. and trainer Todd Fincher. He secured fees-paid entry into the Big Ass Fans Breeders’ Cup Dirt Mile with a hard-fought 1 ¼-length score in the $300,000 Ack Ack Stakes at Churchill Downs. It was the first graded stakes win for the 4-year-old son of Mineshaft, who raced only once last season due to an injury. “He showed his talent,” said Fincher. “We knew he was a talented horse by the way he won the Springboard Mile in 2020. He’s now maturing and I think coming into his own.” The Ack Ack gave jockey Francisco Arrieta the first graded-stakes win of a career that includes more than 3,900 starts.

2022-10-02
Previous Post: Can Mikki Mase Really Beat Baccarat?
Next Post: Sportsbooks Stand to Lose Big If These CFB Teams Win It All