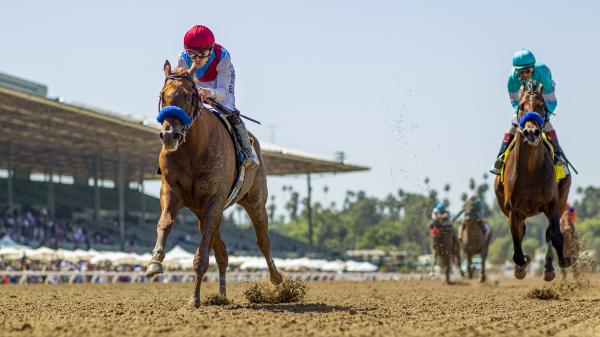 PERSUASIVE OWNER: Trainer Tim Yakteen was not sure Taiba (Tay-bah) was ready for the massive challenge the $750,000 Santa Anita Derby represented and informed owner Amr Zedan of that. “I advised him to take a different route,” Yakteen said. Zedan, who lavished $1.7 million on the Gun Runner colt as a 2-year-old in training, thought otherwise. Not surprisingly, Zedan got his wish and Taiba justified the ambitious placement with a 2 1/4-length victory against Messier, his stablemate. “All credit goes to him,” Yakteen said of Zedan. The youngster was making only his second career start since breaking his maiden by 7 1/2 lengths in a six-furlong contest on March 5 at Santa Anita.

BROWN’S BIG DAY: Trainer Chad Brown, renowned for capturing major turf races but not so much on dirt, may be positioned for a big Kentucky Derby. He won the $1 million Toyota Blue Grass with Zandon, who bested favored Smile Happy by 2 1/2 lengths, and nabbed second with Withers Stakes winner Early Voting in the Wood Memorial. It was Brown’s second victory in the Blue Grass. Good Magic, his 2018 victor, performed well in running second to eventual Triple Crown winner Justify in that year’s Derby.

MIKE’S MASTERY: Give aging Hall of Fame jockey Mike Smith a live horse and he will take care of the rest. “Big Money” Mike showed he can still deliver in the clutch with his masterful handling of Taiba against more seasoned foes in the Santa Anita Derby. Smith, 56, was ecstatic after Taiba’s stunning victory. “I’m not getting any younger. As I get older, I have felt something special is going to happen,” he said. “This just may lead to that. The sky’s the limit.” Smith, of course, swept the Triple Crown with Justify four years ago.

HELPFUL SECOND: Messier indicated he will be a force to be reckoned with in the Kentucky Derby with his solid second at Santa Anita. Consider that he had not raced since Feb. 6, when he dominated the Robert B. Lewis Stakes by a whopping 15 lengths at Santa Anita. “Messier ran huge and he’ll be able to benefit with this race underneath him,” trainer Tim Yakteen said. Nineteen horses that competed in the Santa Anita Derby went on to bring home the roses, including I’ll Have Another (2012), California Chrome (2014), and Triple Crown winner Justify (2018). Those three all won the Santa Anita Derby.