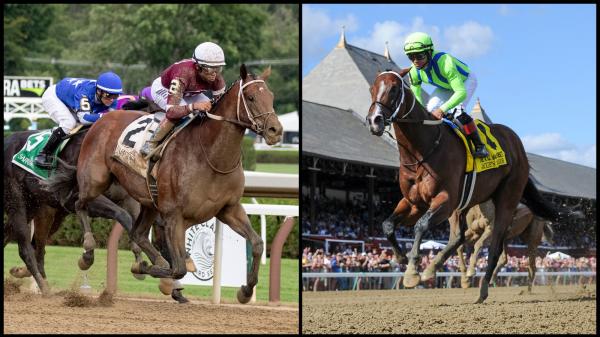 BOUNCING BACK: Epicenter, second in the Kentucky Derby Presented by Woodford Reserve and Preakness Stakes, rebounded in a big way in winning the Jim Dandy by 1 ½ lengths under jockey Joel Rosario against Derby third-place finisher Zandon. “It’s extremely rewarding off two tough races to bring him back in the winner’s circle where we think he belongs,” Hall of Fame trainer Steve Asmussen said. Epicenter missed by three-quarters of a length to 80.80-1 bomb Rich Strike in the Derby. He fell short by 1 ¼ lengths to Jim Dandy rival Early Voting in the Preakness. He would vault himself back into the discussion for leading 3-year-old by winning the Travers, the famed “Mid-Summer Derby.”

UNPRECEDENTED SUCCESS: Champion sprinter Jackie’s Warrior became the first horse to win at least won Grade 1 race at Saratoga for three successive seasons when Rosario hand rode him to a two-length victory in the Alfred G. Vanderbilt Handicap. “The great racehorses that have run here and he’s the only one to do that. I can’t say how much I wanted that for him and am proud of it, and Jackie’s Warrior has done it,” Asmussen said, adding, “I wanted this more than you’re supposed to want things.” The 4-year-old Maclean’s Music colt captured the 2020 Hopeful Stakes before registering a taut victory against come backing Life Is Good in the H. Allen Jerkens Memorial last year.

NO CROP, NO PROBLEM: When jockey Joe Bravo dropped his riding crop while American Theorem made a six-wide bid in the 77th edition of the Grade 1 Bing Crosby Stakes on Saturday, he worried that he might have compromised his mount’s chances. Not at all. The son of American Pharoah had unstoppable momentum and went on to a 1 ½-length decision over Get Her Number. “I dropped my stick on the turn and that will make you nervous,” Bravo said. “But he didn’t need it.” American Theorem secured an expense-paid berth in the $2 million Qatar Racing Breeders’ Cup Sprint for owner Rustin Kretz and trainer George Papaprodromou.

SUPER SUB: Hall of Fame trainer Richard Mandella could not attend the Grade 2 San Diego Handicap at Del Mar on Saturday as he deals with a case of COVID that has sidelined him for almost a week. His son, Gary, saddled Royal Ship and sent the 6-year-old gelding on his way to a surprising 2 ¼-length victory over Country Grammer for jockey Mike Smith. “He was rolling on the backside and just kept going,” Smith said. “I hope this win helps Mr. Mandella feel better. He and his son get all the credit with this horse.”

INAUSPICIOUS RETURNS: Corniche, the nation’s leading 2-year-old when he completed his juvenile campaign with a 3-for-3 record last season, is perfect no more. The son of Quality Road, making his season debut and his first start since being transferred from controversial Bob Baffert to Todd Pletcher, stumbled at the start and was eventually eased by jockey Luis Saez in the $200,000 Amsterdam Stakes on Sunday at Saratoga. Pinehurst, another accomplished talent while in Baffert’s barn, bobbled at the start and finished next to last in the 6 1/2-furlong Amsterdam, which was won by Gunite. Pinehurst was making his first start for New York-based trainer John Terranova.