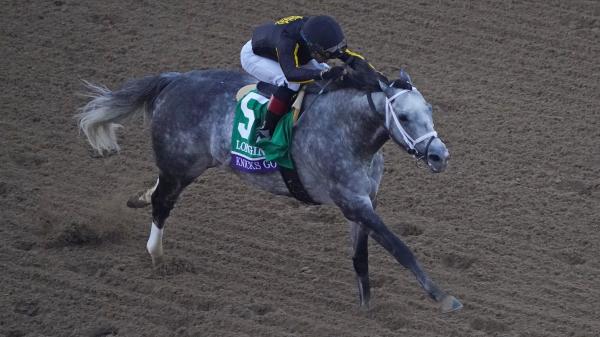 On the crest of a dominant 2 ¾-length romp in the $6 million Longines Breeders’ Cup Classic Nov. 6 at Del Mar, Knicks Go leapfrogged multiple horses to take over the top spot in the new edition of the Longines World’s Best Racehorse rankings.

The 5-year-old by Paynter was previously rated at 124 and improved four points to a 128 rating, one point above three European-based runners in Adayar, Mishriff, and St Mark’s Basilica at 127.

Knicks Go improved to five wins from seven starts in 2021, including Grade 1 wins in the Pegasus World Cup Invitational in January and the Whitney Stakes in August. The clear front-runner for the Eclipse Award as North America’s Horse of the Year also is now in front in the Longines rankings as well, a familiar position for the speedy gray or roan horse who carried his blazing speed 1 ¼ miles in the Longines Classic.

After the trio at 127, Palace Pier and Torquator Tasso check in next with ratings of 125, followed at 124 by Baaeed and Nature Strip.

Another Breeders’ Cup victor who improved his standing in the rankings is Life Is Good, a 5 ¾-length runaway winner of the Big Ass Fans Breeders’ Cup Dirt Mile. The 3-year-old led from start to finish in the Dirt Mile to post his second straight win over older horses and improve to four wins and one second in five races in 2021. He boosted his rating from a 120 to a 123, tied with Longines Classic runner-up and Kentucky Derby Presented by Woodford Reserve winner Medina Spirit for ninth with three others.

U.S.-based runners Domestic Spending, Essential Quality, and Mystic Guide were among a group of eight racehorses tied with a 122 rating.