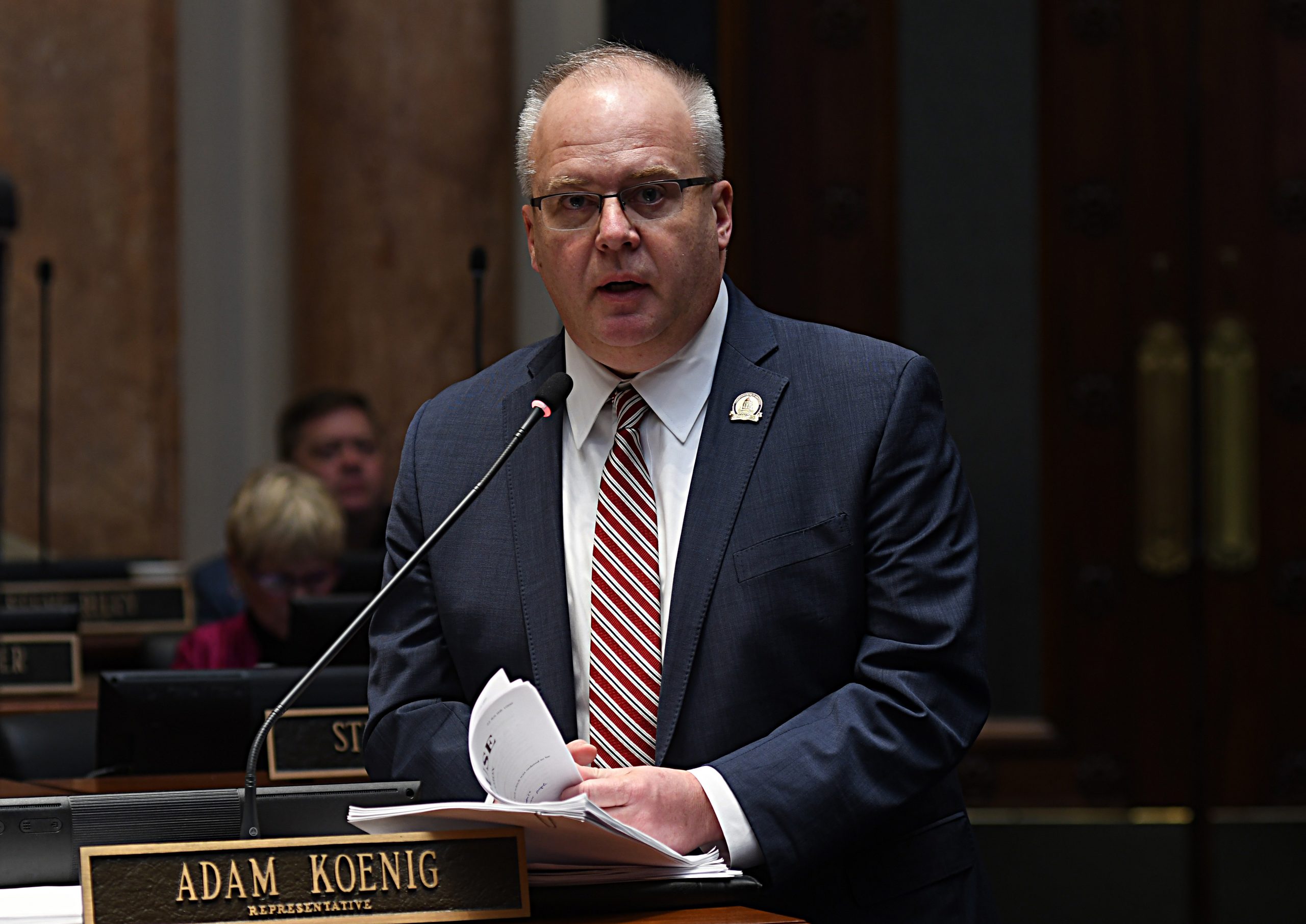 It’s getting down to crunch time in Frankfort for the Kentucky General Assembly’s 2022 session. But the sponsor of a sports betting bill is not ready yet to throw in the towel on his bill passing this year.

Kentucky state Rep. Adam Koenig presents House Bill 606, a law that would legalize sports betting, in the House on March 18. It passed that chamber on that day, but its prospects of passing the senate are less certain, as the General Assembly has just four legislative days left in the 2022 session. (Image: LRC Public Information)

There are four legislative days left in the Kentucky General Assembly session. Two of those will take place on Tuesday and Wednesday before a nearly two-week veto session begins. Lawmakers are set to return to Frankfort on April 13 and 14 to consider any overrides of vetoes issued by Gov. Andy Beshear. They still can, and do, pass new legislation in those final days.

State Rep. Adam Koenig, R-Erlanger, has pointed out he has until 11:59 pm ET on April 14 to get his House Bill 606, which would legalize sports betting, through the Senate.

On March 18, the bill passed the House for the first time since Koenig started filing his proposal in the wake of the Supreme Court’s Professional and Amateur Sports Protection Act (PASPA) decision four years ago. That 58-30 vote, with 37 of the 75 House Republicans voting for the bill, came two years after the bill first passed in committee, only to languish on the floor for two months.

Last year, Koenig filed a sports betting bill. But legislation to codify historical horse racing (HHR) machines in a short session after a state Supreme Court opinion cast doubt on the ability of the Kentucky Horse Racing Commission (KHRC) to permit and regulate the games.

In a Thursday interview with Jon Spevack on his Twitter Spaces sports betting show The Weekly, the lawmaker credited the HHR bill and the support it got last year for helping convince lawmakers to vote on sports betting.

They realized that the world did not collapse,” Koenig said. “They were not kicked out of their churches, their spouses and dogs still loved them, and everything was OK.”

If sports betting passed, the KHRC would be the state’s governing body over it. It would give the state’s race tracks licenses for both retail and mobile operations. Taxes would be set at 9.75% of adjusted gross revenues for retail sportsbooks and 14.25% of AGR for online operators.

Winning Over the Senate

On Thursday’s show, Koenig discussed how he was able to get sports betting through the House. He said he worked to keep lobbyists out of lawmakers’ offices and spoke with his colleagues directly on the merits of the bill.

It’s the same process, which he described as “hand-to-hand combat,” he plans to use to win over senators.

While the bill would only need 20 votes in the 38-member Senate to pass, the political reality is, it would probably need more like 23. That’s because Republicans hold 30 seats in the body, and it’s not likely to even be considered unless a majority of the caucus supports it.

Insiders have told Casino.org all eight Democratic senators are likely to support it.

Koenig does have one rather important ally in the senate, Majority Floor Leader Damon Thayer, R-Georgetown. After the House passed the bill, he expressed some optimism to Casino.org that his colleagues would consider it.

That cooled a bit after Senate President Robert Stivers, R-Manchester, told Spectrum News that the bill didn’t move him.

As Thayer later explained to Casino.org in the days afterward, the sports betting bill and House Bill 608, another piece of gaming legislation that would ban skill machines, sometimes referred to as gray games, are complex pieces of legislation.

Koenig on The Weekly said that he’s hopeful his conversations with senators can help him secure the votes he needs.

“I’ll say this as a legislator, and I’m not saying any senators have said this to me, but I’m pretty sure we think along the same lines,” Koenig said. “You hear about bills and you have some initial thought on it, but you don’t really focus on whether you’re ‘yes’ or ‘no’ until it’s sitting in front of you and you have to make a choice. And so, a lot of these senators have not yet made a choice, and I’m trying to get meetings with them and take my five minutes and tell them why they should be for it.”

What’s Ahead in Frankfort

If there’s not much movement on Tuesday and Wednesday of this week, that does not necessarily doom the bill. The Senate Licensing and Occupations Committee is scheduled to meet on Tuesday. Right now, another gaming bill – House Bill 607, which would reform pari-mutuel wagering taxes and establish penny breakage for live racing – is on the agenda.

It’s not promising that HB 606 will get on the agenda for Tuesday’s meeting. But as Koenig told Casino.org on Friday, the committee could meet again on either April 13 or 14 before the session ends.

One thing that sports betting has going for it is that Democratic Gov. Andy Beshear would sign the bill into law. Knowing that gives supporters more time, especially since Republicans will likely focus their energies the next two days on bills like the biennial budget, income tax reform, and other bills Beshear’s likely to veto during the upcoming recess.