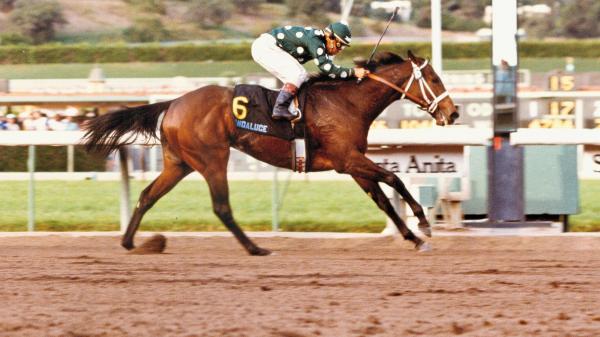 Landaluce: New Book Brings an Iconic Filly Back to Life

If you watch horse racing long enough, you will experience the sport’s many highs and lows: a powerful performance which blows you away, a special horse which captures your heart, an unexpected end that leaves you wondering what could have been.

Forty years ago, when ESPN was just getting started and newspapers were the main source of information, Landaluce’s sizzling performances on the racetrack captured the attention of racing fans across the country, drawing eyes west to California to see what this daughter of Seattle Slew might do next. But a sudden illness brought an end to this rising star’s journey, leaving those who saw her contemplating just what she could have done had death not intervened.

Mary Perdue’s new book Landaluce: The Story of Seattle Slew’s First Champion captures this moment in time. From Seattle Slew’s early days at stud through the filly’s dynamic performances, Perdue shares the stories of those around Landaluce, from Spendthrift Farm to D. Wayne Lukas’s California barn to the racetracks where she dazzled crowds. I talked to Perdue about her look at this filly’s brief moment in the spotlight and the impact Landaluce had on those who saw her as the author counts down to the book’s publication in July.

Why did you want to do a book on Landaluce?

I have always been in love with horse racing, and I can’t tell you where it came from because no one else in my family was. It was always just there. I never got to go to a track, didn’t grow up in it, didn’t have any of those usual pathways, but I just loved the sport.

I had a bucket list of things I wanted to do, so in 2015, I started doing horsey things because I wanted to. And one of those on my list was to go to the Keeneland Library (in Lexington, Ky.). I didn’t go in there wanting any particular information. I just wanted to be there and see it. The man who greeted me asked me if there was any particular horse I wanted like more information about? I decided to pick one that they would have more information on than a normal library would, so I said, “Landaluce.”

He brought me a file that was kind of paltry, to be honest. I went through it and thought, this is it? No one has written a book on this horse? That was the genesis of it. Someone needed to write this book. Why not me? Why can’t I be the one to write it? It was something I was doing for myself. I wanted people to remember her and remember her name.

Describe your writing process. How did you approach writing a book like this?

I have been a fiction writer all my life. I could honestly say that writing this book feels less like writing and more like bridge or road construction. It felt like putting the pieces together rather than writing. A book like this can’t be just a collection of facts or reciting or repeating events: it needs to tell a story and it needs to get the reader engaged even though it’s nonfiction. It’s hard but very fulfilling at the same time.

When you’ve never done it before, you feel like, what if you’re wrong? What if I’ve missed some big thing? At some point, you just have to write, and it takes shape as you go. I did a lot of research before I started. The whole first year was just writing. When you first start out, you don’t know what the story is. You have to find out. You just have to resign yourself to the fact that you’re going to throw out a lot of writing.

Talk about Landaluce. There are only a few images of her. What did she look like? Where did her name come from?

Her name is pronounced Lan-da-loo-cee. They called her Lucy for her barn name and even had I Love Luce bumper stickers when she was racing. There was some talk that Lucille Ball, who was a fan of the sport and had been seen at the racetrack over the years, might do something with her, like presenting a trophy in the winner’s circle, but they never had the opportunity to do that.

She was a dark bay and looked a lot like Seattle Slew. He had no white on him at all, but she had a whirl of white on her forehead and that was it. That was the only white on her. She was also built more like him than like her dam Strip Poker, who was built more like a quarter horse.

Her name comes from a hunting guide the owners had on a trip in Iberia, a man named Paco Landaluce. Owners Bob Beal and Lloyd French normally named their horses after Spanish or Texas towns, like Terlingua or Marfa. The year that they bought her, they had a lot of yearlings and that just happened to be the one they gave her.

Landaluce had only five starts in her short career. Which of the filly’s races do you hold up as her best?

The Hollywood Lassie Stakes, her second start. She won by 21 lengths in a six-furlong race with no urging from Laffit Pincay Jr. That margin of victory was never equaled at any distance at Hollywood Park. It also vaulted her into national media. They were crawling out of the woodwork after that. She became a national figure because of that race. It also catapulted Seattle Slew into the major leagues right there.

Then, after her win in the Del Mar Debutante, she became a serious candidate for the Kentucky Derby and even the Triple Crown in 1983. There was some basis in fact for believing she could run with colts and survive the rigors of the campaign. It wouldn’t have been a pipe dream.

What famous horse can you compare Landaluce to?

Ruffian is the one comparable for Landaluce. She was compared to Ruffian at the time by sportswriters. Ruffian was the greatest American racing filly up to that time and she was the point of comparison for Landaluce. Landaluce carried more weight and ran a longer race at 2 than Ruffian did. She also did a two-turn mile race before Ruffian did.

What do you want casual fans to take away from your book? What about serious fans?

For casual fan, I hope this book will be an example of how much blood, sweat, and tears goes into producing a racehorse and how they affect the lives of all of the people connected to them. She is an example how great racehorses revive the sport, imbue it with love and energy, and unite people in the love of something. For me, racing is more about the passion and the beauty it inspires in people more than it is about all of the other nuts and bolts. That’s what keeps it going is love of the horse, the beauty of the horse, and what these horses represent.

For long-term, serious fan, I would want the book to enlighten people about Landaluce’s career and how significant a horse she was both emotionally and historically. She was Seattle Slew’s first champion and D. Wayne Lukas’s first as well. She was the first to win a championship racing exclusively in California. She was a once in a generation horse. For something like to come from Slew’s first crop, that just doesn’t happen.

Horses leave an impression on those who see them run, learn their stories, and follow them from race to race. Whether claimer or champion, once they touch your heart, you remember their name and their impact for years after they are done. Occasionally, a very special one comes along and captures the hearts of everyone around her, turning her impressive performances into lasting memories. In her short time on the track, Landaluce did just that, leaving us with the story of what it takes to create and love a great racehorse, one who lives on even after her life is done.

Published by the University Press of Kentucky, Landaluce: The Story of Seattle Slew’s First Champion by Mary Perdue will be released July 12, 2022. Preorders are available from your favorite bookseller, including Amazon, Barnes & Noble, and the Press’s website.