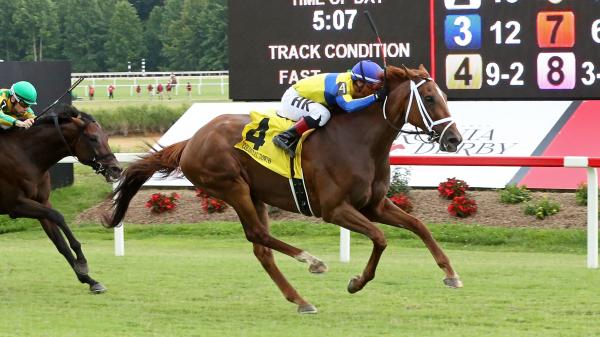 The Grade 2, $1 million Kentucky Turf Cup Stakes drew a full field of 12, plus one also-eligible entrant, all vying to win an automatic entry into the Longines Breeders’ Cup Turf in November.

Arklow, who won the race in 2018 and 2020, is back after missing by a neck last year. Arklow has banked more than $3 million in his career and has never finished worse than second in four career tries on the European style Kentucky Downs course with its dips and rises and a right-hand bend. Red Knight enters the race off a win at this 1 ½-mile distance in the Colonial Cup Stakes following 11 months off and considering he was second to Arklow in this race in 2020 must be considered a strong contender. Gufo enters the Turf Cup following a superb effort winning the Grade 1 Resorts World Casino Sword Dancer Stakes and will be running on this course for the first time. Other recent stakes winners are Breakpoint and Who’s the Star, the former having emerged victorious in the Grade 3 San Juan Capistrano Stakes at 1 ¾ miles on grass in June and the latter having won the Niagara Stakes at the end of July at Woodbine. Like Red Knight, Temple is trained by Mike Maker, as are Glynn County and Keystone Field. Temple enters the race off a third-place effort in the Grade 1 United Nations Stakes and finished third on this course in the 2019 Exacta Systems Dueling Grounds Derby, while Glynn County finished third in the 2021 Turf Cup, in which Arklow was second. Keystone Field is running in a stakes race for the first time in his career. Another Mystery is approaching the half-million mark in career earnings and fits with these off a runner-up effort behind Red Knight in the Colonial Cup Stakes. Admission Office won the Grade 3 Louisville Stakes at this distance in 2020 and earlier this year won the Grade 3 Arlington Stakes but has only fifth- and sixth-place finishes since then. Highest Honors is the lone entrant for Chad Brown, who just won the training title at the Saratoga Race Course meeting. Highest Honors finished third in this year’s Louisville Stakes and was also third in the Grand Couturier Stakes in July. Militarist is the lone also-eligible entrant and will run if any of the 12 in the main body of the race withdraws. He enters the race off a runner-up effort in the Buckland Stakes last month. Rogue Element rounds out the field off eighth- and fifth-place efforts recently.

In the past 10 editions of the Kentucky Turf Cup Stakes, three trainers who have entrants in this race have dominated by having their charges ready for this 1 ½-mile test. Mike Maker leads the group with four wins, with Brad Cox having won twice (both with Arklow) and Chris Block having won twice. The other two to win this race in the last 10 years are Paulo Lobo and Tom Proctor. It just so happens two of those trainers have leading contenders in this year’s race as well – Red Knight (Maker) and Arklow (Cox). The other main contender is Gufo, who is trained by another top tier trainer in Christophe Clement.

Red Knight was away from the races for 11 months, from last August to July 27, and returned as if he had never been off as he won the Colonial Cup Stakes at the distance of the Turf Cup pretty easily in a field of 11. He earned a 108 Equibase Speed Figure for that victory and is almost certainly going to improve physically in his second start off the layoff to run even faster. The Colonial Cup Stakes has since proven productive as the third-place horse came back to win a stakes while the sixth-place finisher missed by a head when second in another stakes race. In the 2020 Turf Cup, his only previous start at Kentucky Downs, Red Knight finished well from fifth for second but was no match for Arklow, who had drawn clear in the stretch to win by 1 ¼ lengths. That year, Red Knight was coming back from eight months on the bench, but since he has run much more recently, this time he could post the mild upset and win.

Gufo has never run on this unusually shaped course (for U.S.-based horses) but that is his only question mark. After reeling off big wins last year in the Grand Couturier Stakes and in the Sword Dancer Stakes, both at this 1 ½-mile trip, Gufo regressed a bit to end his 2021 campaign with third- and 10th-place finishes. Even after winning the Pan American Stakes presented by Rood & Riddle at this distance in April, he regressed a bit for second-, third-, and fifth-place efforts. All that came to an end when he once again wore the blinkers he had on for his two stakes wins last summer, rallying strongly in the final stages to win this year’s Sword Dancer with a 112 Equibase Speed Figure, short of the career-best 116 figure earned winning the same race last year but putting him in line to run even faster and contend for top honors in this race.

Arklow won this race in 2018, was second in 2019, won in 2020 and came up a neck short of victory last year. In each effort, he has proved he adores this turf course and gives 100% every time he runs on it. In his 2020 win and last year when beaten a neck, Arklow earned career-best 116 figures. After a fifth-place effort last October following his win in this race, Arklow took almost nine months off, returning at the end of July for a stirring finish when rallying from fifth and coming up just a half-length short of winning the Bowling Green Stakes. That effort earned a 107 speed figure, which Arklow is sure to improve upon as he now has the benefit of a race under his belt off the layoff. I fully expect him to run as well as he did in this race the previous two years, which is good enough to provide us all with a fantastic stretch run as he battles with the other main contenders in the field.