Largest Bad Beat Jackpot in US History Hits After 16 Months

In the end, it probably couldn’t have ended in any more appropriate fashion. One player holding a seemingly unbeatable hand of quad aces lost at showdown to a royal flush. And, with that, a story we told you about yesterday came to a close when the biggest bad beat jackpot in US history was finally hit.

The largest bad beat jackpot in US history was hit on Aug. 25. (Image: Rivers Pittsburgh)

The “loser,” Benjamin Flanagan of Huttonsville, West Virginia, won $490,708 after he spiked his fourth ace on the river. Raymond Brodersen of Wexford, Pennsylvania (a suburb of the Burgh), had already made his royal flush on the turn while holding K♠ T♠. Thanks to that fourth ace, his hand was good for $368,029 and the pot of white and red chips.

“It’s absolutely thrilling and potentially life-changing for a poker game to pay out at this level,” said Andre Barnabei, assistant general manager at Rivers Casino Pittsburgh, in a press release. “When we launch a bad beat jackpot, we have no idea when it will hit or how big it will get. It’s almost as exciting for us as it is for the winners. Congrats also to our Rivers Pittsburgh poker room team members for a great job.”

The qualifying losing hand was pocket 10s or better. While Rivers, which has 30 tables, seeds the bad beat jackpot with $2,500, the players are the ones who feed the jackpot with a dollar or two from every pot they play.

The second-largest bad beat jackpot at River Pittsburgh was $480K in 2017.

Montreal the capital of the big bad beat jackpots?

But not in North America. 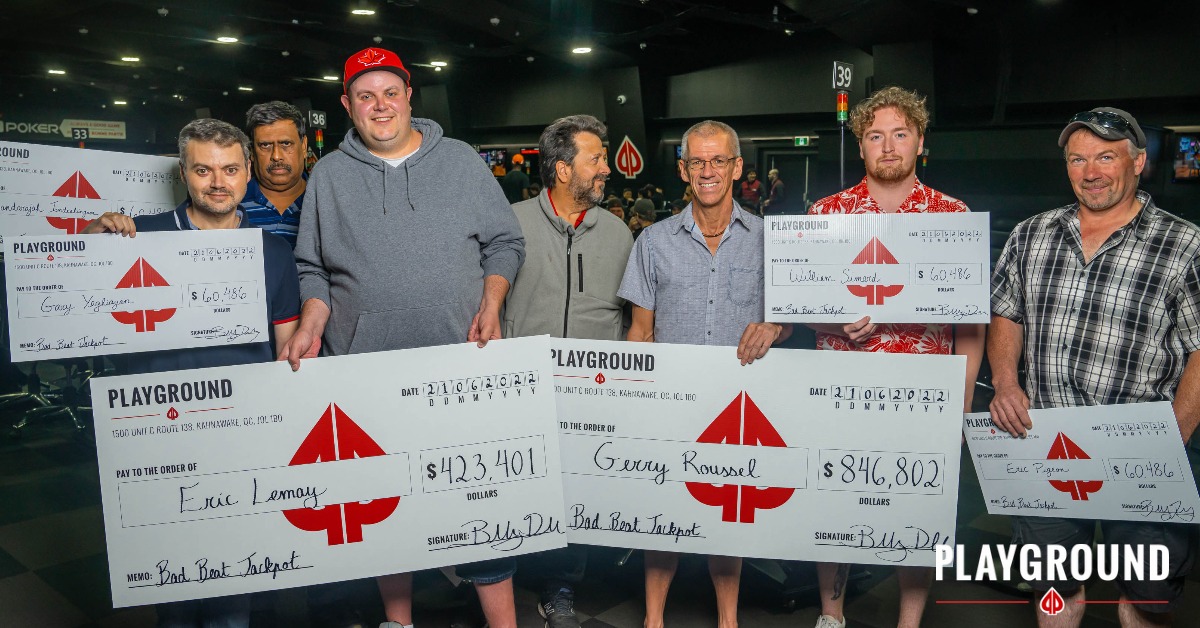 Player Eric Lemay took to Reddit to share his story of heading to the poker room on a Tuesday morning and walking out with $423K as the winner of the hand. The loser won $846K.

Playground also had a $1,375,265 bad beat jackpot hit in 2018. The casino posted a video on YouTube of the moment, which included confetti falling from the ceiling.

The previous world record was hit at Playground’s neighbor, the Casino de Montréal, in April 2018 when eight players got a piece of $1,669,442.