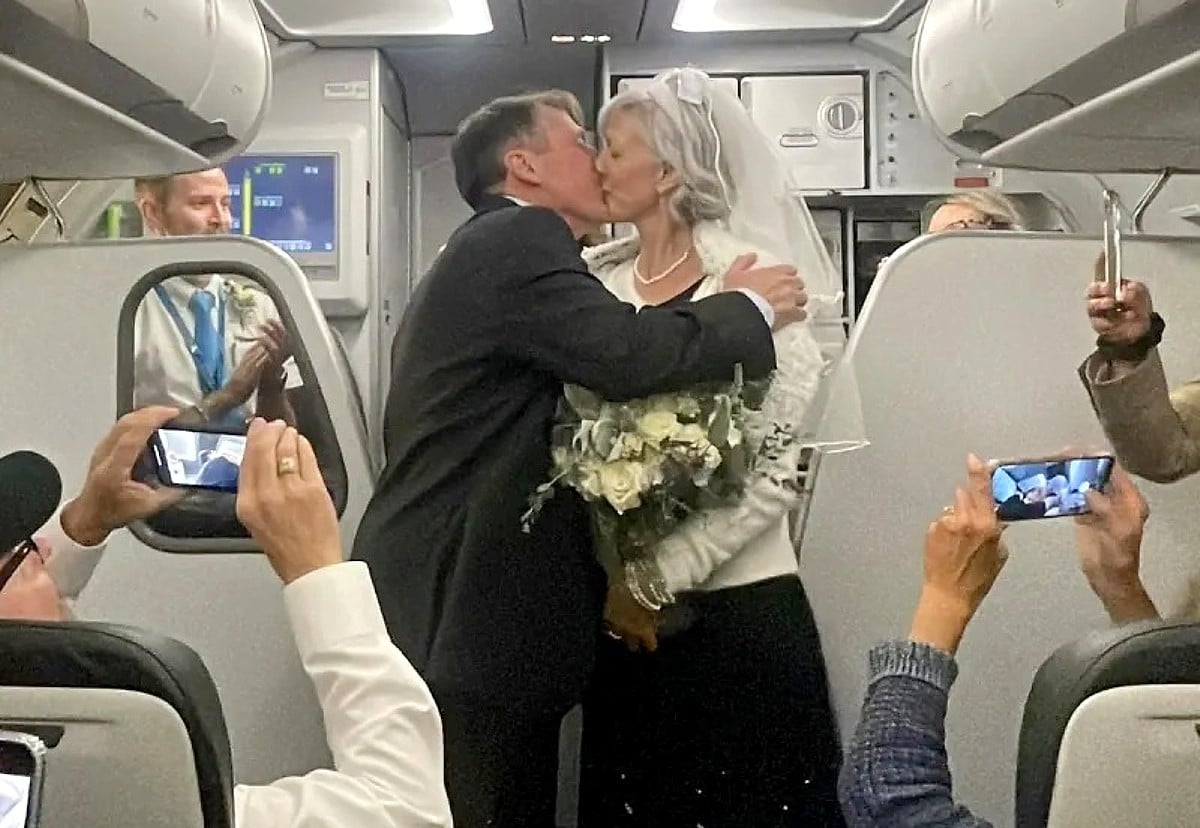 As soon as their plane to Las Vegas from Denver reached cruising altitude, Bright and Wareing exchanged vows in the forward section of the cabin. This was according to a Frontier press release that felt the need to explain that the ceremony was officiated by a female Frontier pilot who was not flying the plane.

Other than the couple and the flight crew, no one else aboard knew in advance about their unique in-flight entertainment. To reduce the odds of anyone objecting to this wedding, the airline plied the other passengers with complimentary refreshments. (The press release did not note whether any were alcoholic, but what do you think?)

And They Weren’t Late!

The happy couple’s plane touched down at Harry Reid International Airport on the morning on Saturday, Nov. 19. And it was on time. (According to flight tracker FlightAware, only one of six Frontier flights from Denver to Las Vegas that day was reported to have arrived late. Flight F9 775 arrived at 6:13 p.m., a mere 23 minutes behind schedule.)

The newlyweds were scheduled to tie a second knot at Chapel of the Flowers at 5:30 p.m. PST Sunday, Nov. 20 in the Victorian Chapel. As the winning couple, Bright and Wareing received the entire package, including their two round-trip tickets, both weddings, and hotel accommodations for free.

Frontier’s “Wedding in the Sky” competition required contestants to upload a one-minute video of themselves summarizing their love story and why they wished to marry in the sky. All couples, including same-sex couples, were encouraged to participate. The top three video submissions were picked by Frontier, which judged them based on “love story, originality, and video creativity.” A public voting system decided the winner among the top three.

The contest was originally launched in Feb. 2020, but delayed because of the pandemic shutdown.

Clark County (which includes the Las Vegas Strip) issued more than 77,000 marriage licenses in 2021. That’s still enough to make Nevada the state with the highest US marriage rate. However, that number is nearly 40% off from 2004, when about 128,000 weddings took place in Clark County. And the pandemic is not to blame. In 2019, the total number of Clark County weddings was 73,000.

The US marriage rate has been on the decline since 2016, according to the federal Centers for Disease Control and Prevention. In 2020, 1.7 million US marriages were recorded, representing a 17% drop from the year before and the fewest marriages recorded since 1963.

The LVCVA is charged with marketing Las Vegas as a destination. Creative initiatives, including the “Wedding in the Sky” promotion, play a critical role in keeping the region’s than 150,000 casino resort and hotel guestrooms occupied throughout the year.