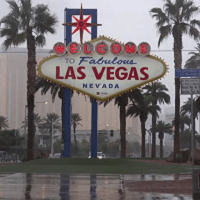 Las Vegas Flooding After Torrential Storm • This Week in Gambling

A month’s worth of rain fell in only two hours, causing Las Vegas flooding that saw standing water in casinos and the closure of the airport. Streets became rivers. Parking garages became waterfalls. There was even water pouring from lighting fixtures in hotels.

Down on Fremont Street, the Circa Casino had water coming from behind video screens. At Planet Hollywood water gushed from the rooftop. And even the illustrious Caesars Palace sprang a leak. It was all quite surreal.

All in all, there were over 300 emergency calls during the storm, and seven people had to be rescued from swift water situations. Fortunately, there have been no deaths reported from the Las Vegas flooding, unlike this week’s tragedy in Kentucky.

All of this from less than an inch of rain. And while that may seem like a remarkably insignificant amount, Vegas is not a city built for rain. In fact, most any amount of precipitation in the deserts of the western United States is enough to set off a large weather event.

Meteorologist Reneé Duff of AccuWeather said “It doesn’t take much rain to cause flash flooding problems in this part of the country… In Las Vegas, all it took was 0.29 of an inch of rain falling in an hour’s time to cause vehicles to become stranded in the streets…”

Forecasts predict that the weather pattern over the next week or so is conducive to more Las Vegas flooding, and is actually a strong possibility.