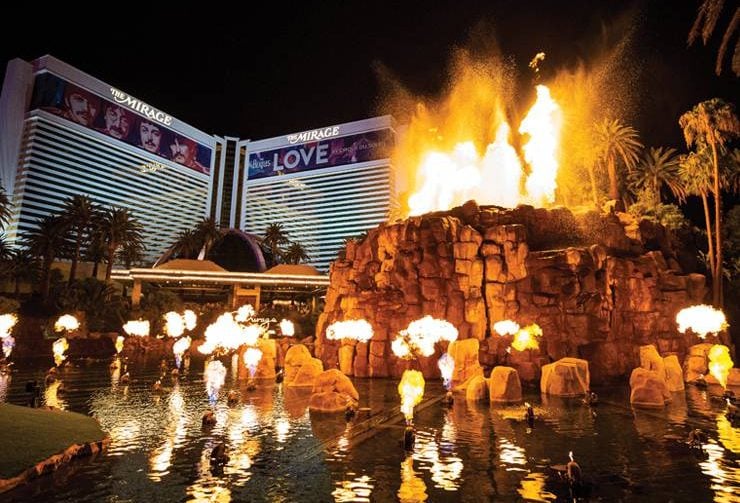 The iconic artificial volcano outside of The Mirage Hotel and Casino on the Las Vegas Strip is likely to be removed when property operations are taken over by Hard Rock International. It is unclear when the volcano will be cleared away, but it will reportedly be a casualty of the deal involving the current casino operator MGM Resorts International.

The artificial volcano outside of The Mirage on the Las Vegas Strip, pictured above. With an upcoming change in operators, the volcano is likely to get dismantled. (Image: Las Vegas Magazine)

The volcano has been outside of the South Pacific-themed Mirage Las Vegas since 1989.

Frankly, it should be a historical landmark — hopefully we can elevate the cause to such a high level!,” the petition reads. “The volcano is among the “most unique forms of art and entertainment.”

As of now, the change in operators becomes effective later this year.

It was followed by the Bellagio fountains, the pirates at Treasure Island, and lights at the Fremont Street Experience, he added.

Elaine Wynn, the ex-wife of former casino mogul Steve Wynn, came up with the idea for the volcano, Michael Green, a history professor at UNLV, further told Travel Weekly.

It reflects the Wynn or Mirage era when megaresorts were mushrooming up and down the Strip,” Green said. “It reflects the theming of the Strip, from the Mirage’s rain forest to New York-New York (which opened in 1997) and Paris (1999), among other places.”

Tourists and locals have turned out nightly between 8 pm and 11 pm to wait for the shows. Over six years ago, MGM cut back on the number of shows, apparently to save money.

Still, it continues to rumble several times nightly, followed by the flow of simulated lava. Flames jump many feet into the air during the presentation. The show also features the aroma of pina colada. The eruption additionally includes a soundtrack composed by Grateful Dead drummer Mickey Hart and composer Zakir Hussain.

When Hard Rock takes over, a guitar-shaped hotel tower is expected to replace the volcano, according to initial architectural designs. Hard Rock will pay $1.075 billion in cash for the operating assets of The Mirage, according to a company statement.

The real estate assets of The Mirage were owned by MGM Growth Properties. The entity was acquired last month by VICI Properties for $17.2 billion. The deal makes the firm the largest casino landlord on the Las Vegas Strip.

With the transaction, Hard Rock will become the first tribal operator on the Las Vegas Strip.

Hard Rock, the gaming arm of the Seminole Tribe, “will enter into a long-term lease agreement with VICI Properties Inc. for the real estate property of The Mirage,” the statement added.

2022-05-12
Previous Post: Who Will Play Phil Hellmuth in High Stakes Duel?
Next Post: IGT to Launch Advantage CMS at Nustar Resorts and Casino