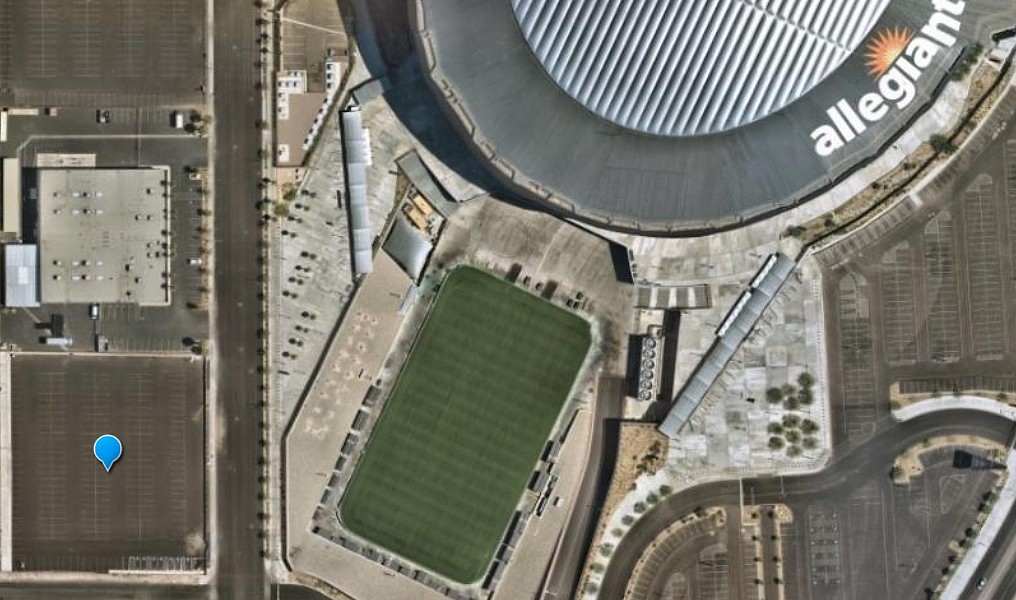 The Las Vegas Raiders have purchased 2.7 acres across from Allegiant Stadium, according to Clark County Assessor’s Office records. The $16.56 million purchase tackles previous plans for a hotel there. The Raiders are so far mum on their intentions for the property at 5585 Polaris Ave., but extra parking is a good bet.

The Las Vegas Raiders have purchased their own Lot S parking lot (identified at lower right by the blue balloon). Allegiant’s retractable natural grass football field is to the lot’s right, which soaks in the Vegas sunshine when not in use. (Image: clarkcountynv.gov)

The land already encompasses the stadium’s Lot S, where it costs $100 to park.

While Allegiant was under construction, the Raiders purchased 17.3 acres near their 65,000-seat home just north of $28 million. That was enough for 2,700 parking spaces. According to Allegiant’s website, more than 35,000 cars can park within a mile of the stadium.

Osprey Real Estate Capital sold two acres of the Raiders’ new parcel, which partnered with Huntington Hotel Group in 2018 to build a 300-room hotel there. Plans for another hotel on the same block were revealed earlier this month – an as-yet-unnamed, non-gaming establishment with 340 rooms on 19 stories.

Manager New Angle Development will bring the proposal to the Clark County Commission for approval on Oct. 4 and hopes to break ground by early 2024.

One thing for certain: Prices in the area are skyrocketing. According to Clark County Assessor’s Office records, the Raiders paid more than double for their new plot than the total of the two parcels it sold for in 2018 and 2019. The former industrial area on the former outskirts of the Las Vegas Strip’s south end was branded “the Stadium District” by the Board of County Commissioners in June 2021.

In the last six months of 2021, more than 1 million guests were brought to the area by the NFL and college football games, concerts, and other events hosted by the stadium, according to the Las Vegas Convention and Visitors Authority figures. Though it cost nearly $1.9 billion to build – $1 billion from the Raiders and $750 million from public funding — the stadium pumps $620 million into the Las Vegas economy annually, according to an estimate on the Raiders’ website.

Buying into the neighborhood before Allegiant’s construction plans were announced in 2016 was a stroke of random fortune for the property owners there. They include David Copperfield.

The magician performs regularly at the MGM Grand and owns a combination magic warehouse and private museum a short walk west of the stadium. He previously told the R-J  he has rejected several offers to sell it.