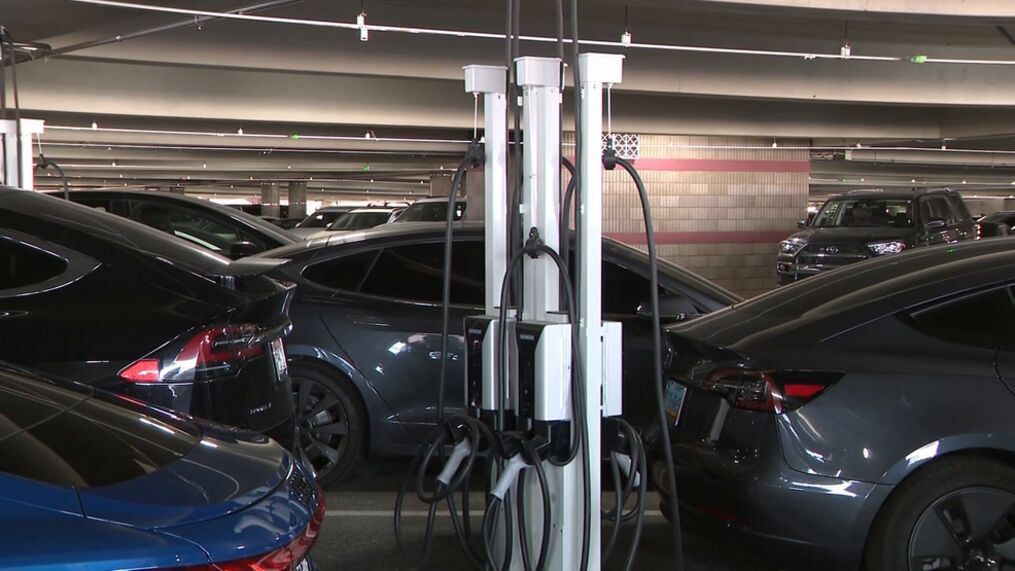 Las Vegas’ Harry Reid International Airport is making it easier for those with electric cars. Starting this month, 24 electric vehicle chargers are now available at the airport.

New chargers for electric vehicles are now at Harry Reid International Airport, pictured above. More may be installed. (Image: KSNV)

They are equally divided between parking garages at Terminal 1 and Terminal 3. The project reportedly cost $250,000 to acquire and install the devices.

The installation was completed at the end of last month,” Joe Rajchel, an airport spokesperson, told Casino.org. “They are available to anyone utilizing the valet parking at no additional cost.”

That means airport passengers can get a fully charged battery upon their return flight. Those driving Tesla electric vehicles need to have their adapters to charge a car at the airport, Rajchel further told the Las Vegas Review-Journal.

Looking ahead, the airport may add more electric vehicle chargers, Rajchel confirmed. They could be located in the long-term parking area.

Over 11,000 Electric Vehicles in Nevada

Supporters say the move to 100 percent will lead to $7.5 billion in public health benefits, citing data from the American Lung Association. The move will also prevent 676 premature deaths, supporters add.

But skeptics argue that the cost of electric vehicles remains too high to be in the reach of lower- and middle-income Americans. In January, the average price for an electric vehicle in the US was $62,876.

That amount is over 93 percent of the median US household income reported in 2020, Jalponik, an online publication covering the auto sector, reported.

But advocates of electric vehicles say their popularity has increased with increasing gasoline prices. The cost of a gallon of gasoline in the Las Vegas Valley is around $5 at many gas stations in the region, the Review-Journal said.

The Las Vegas airport was renamed in December to honor former US Sen. Harry Reid. He represented Nevada in the Senate between 1987 and 2017. Reid was also the Majority Leader of the Senate. He passed away later in December at the age of 82.

It formerly was named McCarran International Airport. That was to honor former US Senator Pat McCarran. He represented Nevada between 1933 and 1954. But officials chose to rename the airport after complaints were made that McCarran was prejudiced.

2022-04-25
Previous Post: David Stroj Breached the Terms of His Parole by Gambling in Las Vegas
Next Post: PokerNews Is Reporting on the Biggest 2022 EPT Monte Carlo Events