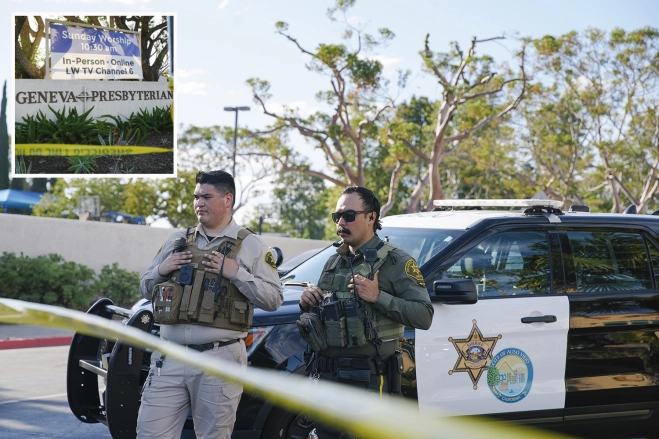 The man accused in this weekend’s deadly California church shooting was once a security guard on the Las Vegas Strip, a local TV station reported. It was not immediately known where he worked on the major gambling thoroughfare.

Police stand guard at the site of a fatal church shooting in California. The alleged shooter, David Chou, formerly worked as a security guard in Las Vegas. (Image: Fox 3 Now)

David Chou, 68, allegedly wounded five people in the church tragedy. Another man was shot and killed, police said. As Chou’s identity was revealed, reports came out about his ties to Las Vegas and Nevada.

He possessed a Nevada security guard’s license, reports revealed. He worked for five security companies in Nevada between 2014 and 2021, according to a document published by The Reporter Times.

KSNV, a local TV station, reported his guard duties took him to the Strip, based on statements from a former neighbor in Las Vegas.

The neighbor, identified as Balmore Orellana, said Chou was last seen in his Las Vegas residence in an apartment complex during February, KSNV said.

May Have Been Living in Car

Chou once co-owned the apartment building, located near Twain Avenue and Decatur Boulevard, where they lived, according to the Las Vegas Review-Journal. He later sold it. Chou may have been living in his car in recent months, Orellana told KSNV.

Orellana also recalled Chou owned a weapon when he lived in the apartment. In fact, Chou once apparently accidentally fired a gun in the residence.

“He went to check on us… There was a bullet on one of my bedrooms,” Orellana told the TV station.

During Sunday’s tragic shooting, Chou allegedly chained doors to the Geneva Presbyterian church in Laguna Woods before firing multiple bullets at worshippers who were having lunch, the New York Post reported.

He allegedly was armed with a 9mm handgun. One man at the luncheon, identified as Dr. John Cheng, 52, was shot, and died. He had run toward Chou in an effort to protect the other worshippers.

Five other victims also were wounded in the church. They have survived.

Realizing the violent risk, a man believed to be the church’s former pastor, Billy Chang, reportedly used a chair to strike Chou in the head. Other congregants then grabbed his firearm.

David Chou in a mug shot, pictured above. He is charged with murder and other crimes. (Image: Orange County Sheriff’s Office).

They were able to tie his legs using electrical cords. Police rushed to the church and apprehended Chou.

It was later revealed Chou allegedly hid ammo and Molotov cocktails in the church, the Post said. He also was armed with a second 9mm handgun, the report adds.

The two pistols were legally purchased in Nevada, the Post said.

As of Monday, Chou was charged with felony murder, as well as five counts of attempted murder, and four counts of unlawful possession of explosives. Additional charges are possible, such as a hate crime, news reports said.

He was being held late today (May 16) on $1 million bail in a California jail.

Chou earlier had lived in Taiwan. He apparently had a grievance with the Taiwanese community, police revealed, The Guardian newspaper reported. There are continuing tensions between Taiwan and China.

The church luncheon was held by the Irvine Taiwanese Presbyterian church, which worships at Geneva Presbyterian, the report adds.