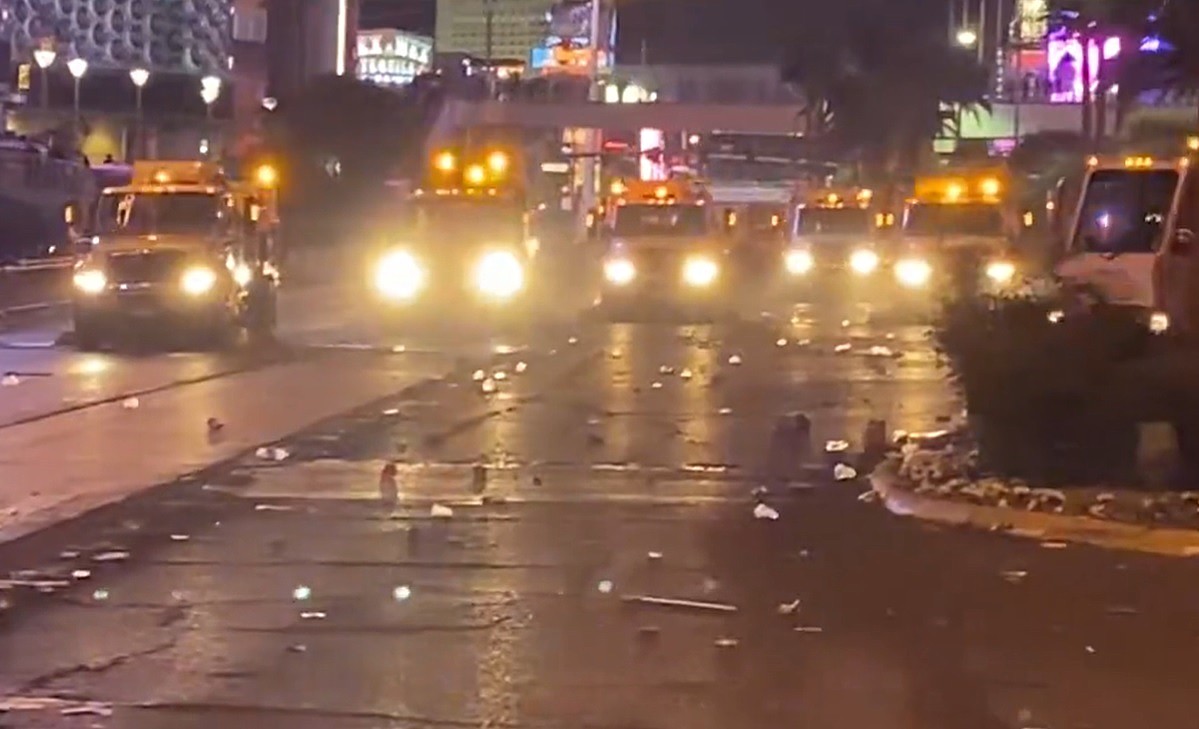 Around 12 tons of garbage were removed from the Las Vegas Strip following last night’s “America’s Party” celebration, according to a tweet from Clark County. Picking up thousands of paper horns, party hats, and plastic cups between 12:30 a.m. and 4:30 a.m. is challenging enough during a normal year. This year, it was all soaked with rain, making it heavier and more slippery.

Some of the 20 street-sweepers tasked with removing 12 tons of trash from the Las Vegas Strip early this morning. (Image: Twitter/Clark County Nevada)

More than 60 Clark County Public Works crew members did the dirty work, which enabled the street to reopen on schedule at 4:30 a.m. – 90 minutes before its hard deadline. The first wave carried leaf blowers to sort the trash into lines, enabling the second wave – driving 20 street sweepers – to suck it up.

A light rain began at 11 p.m. and threatened to get heavier. But that dampened neither the spirits nor the size of the crowd, most of which consisted of tourists who made hotel and plane reservations months in advance to attend. Though no official estimate was released as of this posting, officials predicted as many as 400,000 would line the streets – about 100,000 more than last year.

Though the annual fireworks show was canceled in 2020 because of the COVID pandemic, it had never been called for weather in its 22-year history. (The last time rain fell on New Year’s Eve in Las Vegas was in 1943, when 0.21 inches were measured.)

While the marquees of most of the eight Strip resorts launching fireworks from their rooftops warned that high winds could delay the eight-minute fireworks show, the 45 mph gusts predicted by some weather forecasts never materialized. The crowd’s faith was rewarded by a dazzling display choreographed by the famous Grucci fireworks family.

The Las Vegas Metropolitan Police Department, which dispatched more than 1,000 officers to the Strip and downtown, reported no major crimes during the celebration. One death occurred when a 29-year-old man struck a curb on his motorcycle, slamming it into a brick wall at Annie Oakley Drive and East Harmon Avenue at 12:36 a.m..

What Happened in Downtown Vegas

A separate New Year’s Eve fireworks display simultaneously lit up the skies over the Plaza Hotel in downtown Las Vegas, preceded by a squadron of 150 drones forming the “Welcoming to Las Vegas” sign.

The Fremont Street Experience was the site of a three-stage, $50-per-head concert featuring Sugar Ray, Bush, and the Sugarhill Gang. Following the concert, midnight was counted in by Las Vegas Mayor Carolyn Goodman and her husband, former mayor Oscar Goodman. (The Las Vegas Strip is located outside the city’s jurisdiction, in a township called Paradise, Nev.)

As of this posting, the Fremont Street Experience did not announce how many revelers attended or how much trash they left behind.