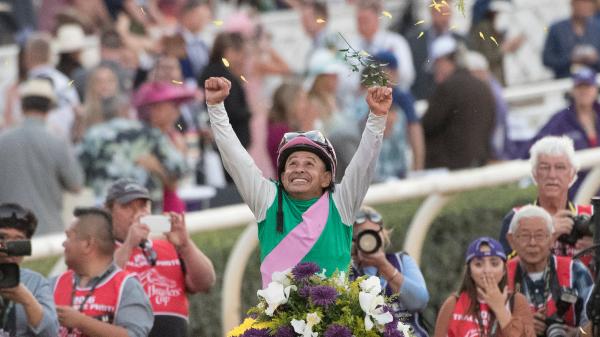 Several of the all-time winningest jockeys in Breeders’ Cup history are still active, and if you are stuck between two horses in any given race and looking for a tie breaker in your 2022 Breeders’ Cup handicapping on Nov. 4-5 at Keeneland, you could do a lot worse than focusing on the jockeys with the best records of Breeders’ Cup success so far in their careers.

Based on results in past Breeders’ Cups, some of the best bets may be horses ridden by Mike Smith, John Velazquez, Irad Ortiz Jr., and Joel Rosario.

Who are the best Breeders’ Cup jockeys, and who needs to improve?  Read on for an overview of how some of the biggest-name jockeys in the world have performed in World Championships competition to date.

Best Breeders’ Cup Jockeys – The Cream of the Crop

The jockey currently moving up the Breeders’ Cup win leaderboard the fastest is Irad Ortiz Jr., who won his first Breeders’ Cup race in 2014 aboard Lady Eli and is already up to 14 career BC wins, with 11 victories the last four years. Irad won aboard three of 11 mounts at the 2021 Breeders’ Cup including Life Is Good in the Big Ass Fans Dirt Mile, Golden Pal in the Turf Sprint, and Twilight Gleaming in the Juvenile Turf Sprint. His two winners in 2020 were Golden Pal in the Juvenile Turf Sprint and Whitmore in the Sprint. His biggest year to date was his four-win showing in the 2019 Breeders’ Cup. Irad’s 14-for-74 record gives him a big 19% win rate and already has him placed 10th all-time on the Breeders’ Cup jockey earnings list with $18,960,345. All the jockeys ranked above him on that list had more mounts.

Another jockey making the most impact in the Breeders’ Cup in recent years has been Joel Rosario. Rosario added two to his win total in 2021 Knicks Go in the Longines Classic and Echo Zulu in the NetJets Juvenile Fillies and already is up to 15 career wins from 135 mounts. With Rosario it also should be noted that he has a total of 45 in-the-money finishes, giving him an outstanding 33% Breeders’ Cup in-the-money percentage. He won a pair in 2020 aboard Knicks Go (Big Ass Fans Dirt Mile) and Vequist (Juvenile Fillies), and now has won at least one Breeders’ Cup race every year since 2014, with 13 of his 15 winners coming in the span of the last eight years. Rosario is all the way up to third on the all-time Breeders’ Cup earnings list with purses of $26,762,535.

The all-time leading rider in the history of the Breeders’ Cup is Mike Smith with 27 career wins and there may be no better rider to have aboard your Breeders’ Cup horse than this veteran, proven big-race rider. Smith is not riding too many horses anymore (just three Breeders’ Cup mounts in 2021) but he’s still getting it done. In 2021, he rode Corniche to victory in the TVG Juvenile Presented by Thoroughbred Aftercare Alliance for his first Breeders’ Cup win since 2017. Smith leads all jockeys in Breeders’ Cup purses won with $37,794,605

The other veteran jockey on the “big-race rider” level of Mike Smith is John Velazquez, who now has 18 Breeders’ Cup wins dating back to 2000, including two winners in 2020 – Gamine in the Filly & Mare Sprint and Authentic in the Longines Classic. He failed to win in 2021 but did finish second in the Classic aboard Medina Spirit. You can do a lot worse than having Johnny V. aboard your Breeders’ Cup pick in any race. He is ranked second in all-time Breeders’ Cup purse earnings with $34,220,275.

Keep These Jocks on Your Radar

Javier Castellano does not seem to be getting as many high-profile stakes mounts as he used to, but he enjoyed somewhat of a career resurgence this year at Saratoga and might again benefit from some live BC mounts in 2022. Castellano owns 12 career Breeders’ Cup wins and scored at least one BC win per year in each year between 2012 and 2019.

Florent Geroux already has logged seven Breeders’ Cup winners from only 34 mounts to date. That’s a strong 21% win percentage. Geroux won the 2020 Longines Distaff aboard Monomoy Girl and the 2020 Juvenile Fillies Turf on Aunt Pearl. Will he rebound from 2021, when he went winless with six mounts?

How Do Top European Jockeys Stack Up?

Ryan Moore has come over from Europe and made bank on several occasions during his career, winning nine Breeders’ Cup races from 83 mounts with earnings of $16,917,035. His most recent winner, however, was back in 2017 with Mendelssohn in the Juvenile Turf.

If you are looking for the hottest European rider to bet in terms of the Breeders’ Cup, that title would go to William Buick, who owns five wins and three seconds from 24 career BC mounts, including three grass wins in 2021 for trainer Charlie Appleby when Yibir won the Longines Turf, Space Blues won the FanDuel Mile Presented by PDJF, and Modern Games took the Juvenile Turf. He’s also won with four of his five starters in North America in 2022, with three Grade 1 wins in partnership with Appleby.

The other European jockey you are very likely to come across in your handicapping is the top European-based rider in the history of the Breeders’ Cup, Frankie Dettori. Dettori has won 14 races from 112 mounts dating all the way to his first BC winner in 1994 (Barathea in the Mile). Dettori ranks fourth by purse earnings on the all-time Breeders’ Cup jockey list with $25,281,862, but his last BC winners were all the way back in 2018 when he won both the Longines Turf with Enable and the Mile with Expert Eye.

Jose Ortiz is often mentioned in the same breath as his brother, Irad, but when it comes to the Breeders’ Cup Jose has yet to achieve anything close to the same level of success as Irad. Jose Ortiz owns just five Breeders’ Cup wins so far from 72 mounts for a win percentage of 7%. On the bright side for fans of Jose Ortiz, he exits his best ever year at the Breeders’ Cup in 2021, when he won twice aboard Pizza Bianca in the Juvenile Fillies Turf and Aloha West in the Qatar Racing Sprint and earned a total of five top-three finishes.

A jockey that rides essentially on par with Rosario and the Ortiz brothers at all other meets except the Breeders’ Cup is Luis Saez, who so far has tallied a sub-par Breeders’ Cup career record with just one career Breeders’ Cup win from 41 mounts. You read that right, 1-for-41. The win came in 2020 aboard Essential Quality in the TVG Juvenile Presented by Thoroughbred Aftercare Alliance, and Saez’s third-place finish back aboard that horse in the 2021 Longines Classic was his best finish from seven mounts last year.

Another Breeders’ Cup under-performer thus far has been Flavien Prat, who has only three wins to date from his first 57 Breeders’ Cup mounts (5%). His most recent winner was Storm the Court’s upset in the 2019 TVG Juvenile. You can bet Prat’s lack of Breeders’ Cup success is not lost on him – it is one of the reasons Prat elected to move his tack out of Southern California in 2022. Time will tell if the change in scenery and all of the different trainers he has ridden for this year will help get him more winning mounts. Prat has an excellent chance to make his biggest Breeders’ Cup impact yet in 2022. He is the regular rider of prohibitive Breeders’ Cup Classic favorite Flightline.