Learn From The Pros – Hellmuth vs. Koon Heads-Up

It doesn’t get much better than Jason Koon and Phil Hellmuth playing heads-up for big money. Kudos to PokerGo for putting together these fantastic broadcasts. While so many lesser live streams are focused on wild gamblers and quirky personalities to bring in viewers, PokerGo delivers the best players in the world on a super high quality broadcast again and again.

This match in particular has a ton of interesting spots, and having played with the best in the world many times myself I can assure you, these two really are the cream of the crop. They’ve both been in my list of the top ten players in the world for a few years now and I was excited to watch this match play out.

These articles will be focused on the kinds of things the best pros are thinking and how their thought process is different from the vast majority of players, even some strong pros. While our hand today doesn’t feature a ton of fireworks, a monster pot, or even a heated exchange between the players, it is really valuable if you’re trying to step up your game.

As you move through the hand, think about how you might have played it differently on each street. This hand never plays out this way with two intermediate or beginning players, which is the reason I chose it. This is high level thinking applied to even a fairly small pot.

The hand starts at one hour and eleven minutes into High Stakes Duel 3, Round 5. Koon is dealt 9s7h on the button. This is an automatic raise for a serious player heads -up. There are times when they might play differently, but they would need a very good reason. The best heads-up players will raise between 85% and 100% of their buttons in a heads-up match.

The players are a lot stronger than the hands in this one. (Image: PokerGo)

Why do they raise so many hands? Because they have the button. Position is very important in heads-up play and you can’t be folding too many buttons or you will be playing most of your hands out of position.

Why not raise more, or min-raise?

If you raise too much, your opponent can easily punish you. A bigger raise size forces them to play correctly against it by folding more hands and making big reraises when they have a hand to play. An experienced head-up player will automatically attack this strategy and will have a nice advantage against an opponent who is making oversized raises.

If you choose to raise the minimum, your opponent will correctly call with a very wide range and only continue if they flop something since the pot will be quite small. This forces them to play correctly as well and doesn’t push your positional advantage enough.

With shorter stacks a smaller raise size is correct. With less than 40 big blinds, raising to 2.5 big blinds gets to be too large a portion of your stack and the correct raise size starts to get smaller.

Hellmuth has Js7s in the big blind, and calls automatically. He will be calling with a wide range, though not nearly as wide as Koon’s button raising range because he is out of position. This hand isn’t nearly weak enough to fold and certainly not strong enough to reraise.

There is 20K in the pot when they see a flop. Remember, this is real money. To most players this would be an enormous pot, but for this match it’s quite small. 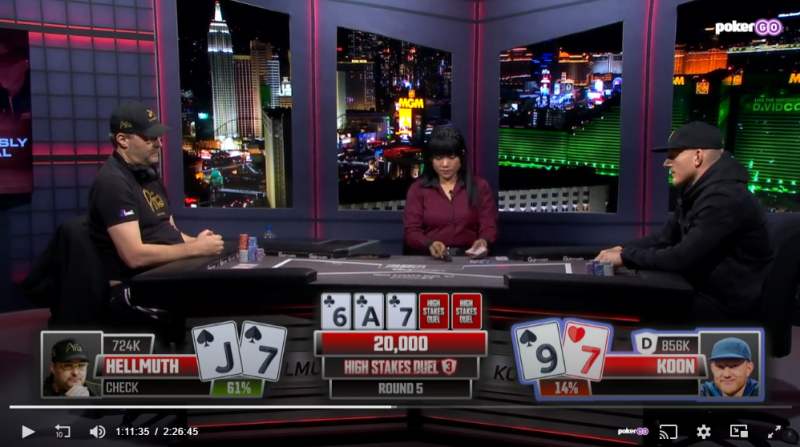 A perfectly fine flop for both players in a heads-up pot. (Image: PokerGo)

The flop of Ac 7c 6c looks scary to players who are used to playing full ring games with multiple players seeing the flop. But in a heads-up match this is a pretty good flop for both players.

Hellmuth checks, which is pretty stand for a player who has called a raise out of position. Typical players in Koon’s position might bet here. And they would have some legitimate reasons for betting. Koon’s hand feels quite vulnerable with so many potential over cards and a flush draw very possible in his opponent’s hand.

But Koon knows a few things. First of all, if his opponent has a flush draw, and decides to check-raise, he will be in a tough spot. Does he call down all the way and potentially pay off a bigger hand? Does he call and then fold to a turn bet and abandon the money he has put in the pot? Or does he fold and risk being bluffed by a single club?

Koon checks behind. This under represents his hand and will make it tougher for Phil to read on later streets, and also controls the pot size. If he starts building a pot now it could easily get too big for his mediocre holding. Jason is comfortable playing a small pot in position with his weak hand and not concerned about the risk of being outdrawn. If these guys were afraid to gamble they would never have made it this far.

When the fourth club comes in on the turn, Phil checks again, knowing that if he bets here he will usually be behind when he is called. He also knows that this card will usually be scary for Koon too. Which means that if Koon bets he usually has a fairly strong hand or he is bluffing on a board that looks perfect for it. I think Hellmuth is planning to call if Koon bets here, depending on the size of the bet. 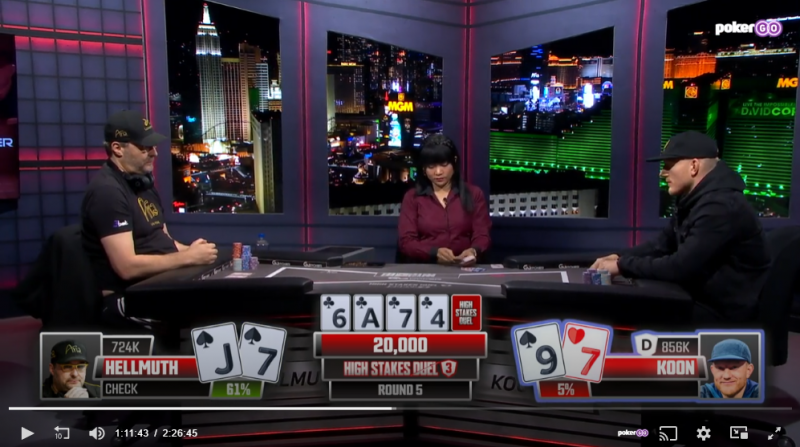 It doesn’t help either player, but the turn makes for a scary board. (Image: PokerGo)

Koon checks behind again. He knows that he can’t bet for value, he is usually beat when he is called, and bluffing doesn’t make sense because very few hands that beat him will fold. He checks and hopes to either see a free showdown or encourage Phil to bluff with his weakest hands.

The river is a blank

The 2d on the river doesn’t help anyone. The action is on Phil. He has seen Jason check behind twice, so a big hand is almost impossible. He knows his opponent is smart enough to start building a pot if he has a big hand and he is almost certain that he has the best hand. So Phil has to decide if he wants to check and hope that Koon will try to bluff, or bet his own hand for value.

Phil also knows that if Koon would only bet a really hopeless hand like jack-high or worse in this spot. And there aren’t many bluffs left for Jason that have no club, no pair, and chose not to bet on previous streets. Phil has to bet for value here, and he chooses to bet just 4,000. 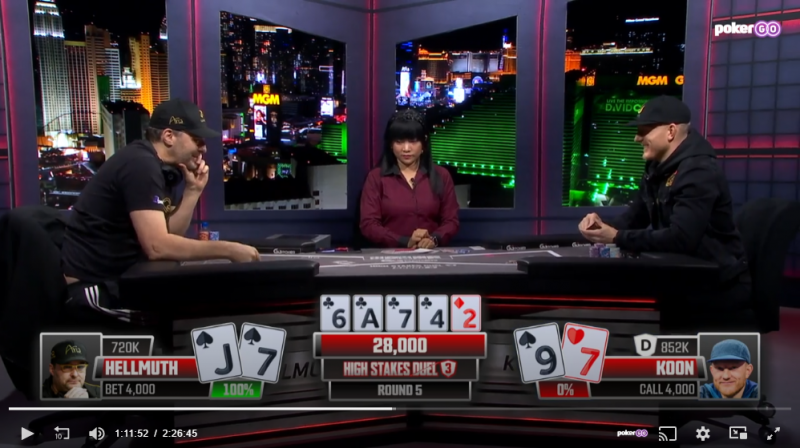 Why so small? Doesn’t that look like a value bet? Won’t Koon fold simply because this doesn’t look like a bluff?

Phil is trying to get a call from one pair. And with the size of the pot, it will be hard to fold to such a small bet if his opponent has a pair. He might even call with king-high. If Jason is folding to small bets like this consistently it would be easy to exploit him by making them frequently and getting a great price to bluff hand after hand.

Koon doesn’t like it, but he has to call. Phil could be betting this small with a lower pair and there is always the possibility of a small bet bluff, though Phil rarely bluffs this small. He calls, and gets the bad news. Phil has him outkicked. He’s not surprised, he certainly thought he was going to lose the pot more than half the time when he called, but the price was too good.

Neither player considers this a challenging hand. It’s fairly standard among serious pros. I’m nowhere near the player either of these guys are, but I would play the hand the same way myself.

If you would have played it differently, think about why? Is it fear that you would be drawn out on? Is it a lack of understanding of opponents’ ranges? Is it the joy of winning a pot or running a bluff? If you can be more like these two, do it. You won’t find many better examples of how to play the game than watching this match.

You can watch the whole match over at PokerGo if you have a subscription.

2023-01-23
Previous Post: Liechtenstein to vote on a referendum to ban casinos on January 29
Next Post: 2023 Pegasus World Cup Cheat Sheet: Get to Know the Horses