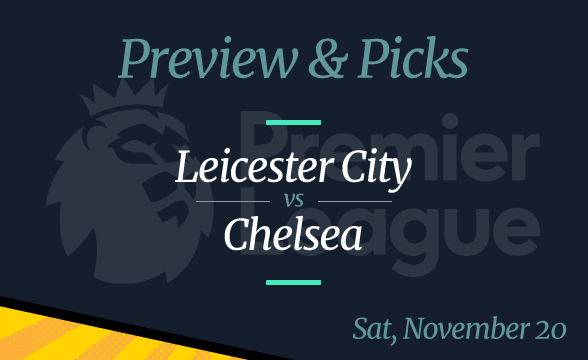 The English Premier League returns after the international break with some really interesting matchups on Saturday, November 20. One of those is the clash between Leicester City and Chelsea, which will take place at King Power Stadium.

The last time these two met at that venue, the foxes won 2-0. Can they do it again? Oddsmakers don’t think so. Instead, they’ve given the role of the favorite to the Blues from London.

All odds are per FanDuel as of November 19.

In the past, Leicester City was famous as a disciplined bunch that’s very hard to score against. In the 2021-22 Premier League, it’s a different story. This team has conceded 18 goals in 11 games, which makes their defense one of the worst in the league. In fact, there are only four teams that have conceded more.

The worst thing is that the Foxes have managed to keep a clean sheet only once since August. It happened in September when they beat Millwall in the EFL Cup.

In their two most recent games, the Foxes conceded only one goal per game. Unfortunately for them, their offense was unable to score more than the opposition, so both matches ended 1-1.

Leicester’s leaky defense could have serious problems on Saturday, especially if Romelu Lukaku and Timo Werner return for Chelsea. The two have been out for several games, which explains why the Blues scored only two goals in their previous two games.

Without two of their crucial forwards, Chelsea boss Thomas Tuchel had to put a midfielder up front. In those games, Kai Havertz played the role of the lone striker. He did his job well, but Lukaku/Werner would’ve probably done even better. If at least one of them makes a comeback on Saturday, Leicester City’s defense is in trouble.

When it comes to Chelsea’s defense, the Blues shouldn’t worry much about it. They’ve been superb at the back this season, conceding only three goals in the 11 games they’ve played this season in the Premier League. That’s better than any other team in the league.

History teaches us that matches between these two are always tough. In fact, in their past six meetings, we saw two of each – Leicester wins, Chelsea wins, draws.

This time, Chelsea is the betting favorite and there’s a reason for that. In the 2021-22 season, the Blues look much, much better than most other teams in the Premier League, including the Foxes.

Pick: Chelsea to win; under 2.5 will probably hit.