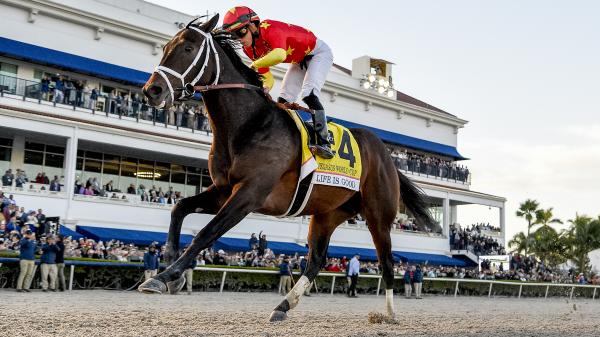 Since it was launched by Sheikh Mohammed bin Rashid al-Maktoum in 1996, the Group 1 Dubai World Cup Sponsored by Emirates Airline has proven to be a grand international stage for some of the United States’ best and most accomplished Thoroughbreds.

Cigar, Silver Charm, Curlin, California Chrome, and Arrogate stand out among the iconic American runners who have traveled to the Middle East and triumphantly displayed all of the talent and class that made them so famous at home.

Now, on March 26, in the 26th renewal of the $12 million Dubai World Cup, a brilliant 4-year-old fittingly named Life Is Good will attempt to add his name to that list of elite superstars.

Owned by China Horse Club and WinStar Farm, Life Is Good will tackle 2,000 meters (about 1 1/4 miles), his longest race to date, while breaking from the rail and attempting to add more Grade/Group 1 laurels to his resume. He comes into the Dubai World Cup off top-level victories in Grade 1 Pegasus World Cup Invitational Stakes Presented by 1/ST BET and the Grade 1 Big Ass Fans Breeders’ Cup Dirt Mile for trainer Todd Pletcher.

“It’s a great race, with great tradition and a great history and hopefully Life Is Good can add his name to it,” said Elliott Walden, CEO, president, and racing manager of WinStar Farm. “He’s such a special horse. He has shown it every time he’s gone on the racetrack and we hope he’ll do it again Saturday.”

A son of Into Mischief bred by Gary and Mary West, Life Is Good battles 10 rivals, including an unusually strong array of American entrants, while bidding for a fourth straight victory and his seventh in what will be his eighth career start. After a 2021 contingent of four U.S. starters produced the victorious Mystic Guide along with another three who fared no better than sixth, Life Is Good tops an outstanding American roster. Hot Rod Charlie (post 7), Country Grammer (post 5), and Midnight Bourbon (post 8), all of whom have either multiple wins or placings in Grade/Group 1 company, will also be on hand Saturday in a reflection of the allure generated by the $20 million Group 1 Saudi Cup in late February followed by the DWC a month later.

“It’s a wide-open race with some very tough horses, which is what you would expect for $12 million,” said Doug O’Neill, who trains Hot Rod Charlie.

As strong as the field may be, there is a standout in Life Is Good, especially after the speedy 4-year-old’s decisive, 3 1/4-length front-running victory in January over 2021 Horse of the Year Knicks Go in the Pegasus World Cup.

“Every day he trains, he’s special,” Walden said about a horse who missed the Triple Crown due to ankle surgery while with original trainer Bob Baffert. “He has such a beautiful way of moving. I think he knows he’s special and it’s just fun and a blessing to be around a horse like that. It’s a great honor to be here and a great honor to be the favorite. We’re looking for good things on Saturday.”

Though the Dubai World Cup will mark the first 1 1/4-mile race for Life Is Good, stretching out to 1 1/8 miles for the first time in the Pegasus World Cup did not pose a problem for the $2.8 million earner and Walden believes an extra furlong Saturday should not be an insurmountable obstacle.

“He’s a fast horse and seems to do everything easy in the morning, but until you run 1 1/4 miles, there’s always a little bit of doubt,” he said. “But he’s a tremendous horse and I’d rather be in this position with him than have a slow, mile-and-a-quarter horse.”

With Life Is Good breaking from post one with jockey Irad Ortiz Jr., and all four of the American horses possessing keen early speed, the early stages of the race promises to be interesting and perhaps highly telling – if they can keep up. Not even 2021 Horse of the Year Knicks Go could do so early with Life Is Good in the Pegasus World Cup.

“The rail is fine,” Walden said. “As long as he breaks fine, he will be in good shape.”

With so many good horses preferring to be on or just off the pace, O’Neill is glad to have an experienced combo in Hot Rod Charlie, who set a torrid pace while holding on for second in last year’s 1 1/2-mile Belmont Stakes Presented by NYRA Bets. He is ridden by jockey Flavien Prat, who has been aboard him for most of his races over the past 10 months.

“I’d like to see ‘Charlie’ with an easy lead, but I know that’s not happening,” O’Neill said with a chuckle. “But the continuity of Flavien knowing ‘Charlie’ and ‘Charlie’ knowing Flavien helps. I think he’ll break clean and Flavien will be able to decide what to do. It’s good that we don’t have the guesswork of not knowing if a horse and rider will get along.”

Along with Zedan Racing and Commonwealth Thoroughbreds, WinStar also owns a share of Grade 1 winner and Saudi Cup runner-up Country Grammer, creating even more of a showcase for the successful operation helmed by WinStar owner Kenny Troutt and Walden.

“We’ve been blessed to be around a lot of good horses,” Walden said. “Mr. Troutt is a great owner who gives us the resources to do the best we can. There’s a lot of great teamwork at WinStar and we work hard.”

Country Grammer, a 5-year-old son of Tonalist bred by Scott and Debbie Pierce, was bought for $110,000 by WinStar from the Paul Pompa dispersal at the 2021 Keeneland January Horses of All Ages Sale, and won the Hollywood Gold Cup Stakes in his second start for WinStar and Baffert. Even more impressive was the work Baffert and his team performed in preparing Country Grammer for a determined, second-place effort in the rich 1 1/8-mile Saudi Cup after a nine-month layoff.

“It’s not often you run in a $20 million race as a prep for a $12 million race,” said assistant trainer Jim Barnes, who has cared for Country Grammer during his stay in the Middle East. “He really showed up (in the Saudi Cup) and all signs are forward with this horse. I really believe he’s a mile-and-a-quarter horse. Watching the replay (of the Saudi Cup), he was trying to come back on again. He’s such a gritty horse. We’re looking forward to this.”

Much like California Chrome before his 2016 victory in the Dubai World Cup, Hot Rod Charlie prepped for Saturday’s race with a race over the track.

“We got there early to get a race over the track and he continues to settle in. He’s worked each Saturday for the last four weekends and we’re very optimistic going into the race,” O’Neill said.

Though he won only two of eight starts as a 3-year-old in 2021, Hot Rod Charlie spent the year registering one strong effort after another while tackling elite competition. Officially second in both the Kentucky Derby Presented by Woodford Reserve and Belmont Stakes, the Pennsylvania Derby winner closed out 2021 with a fourth in the Longines Breeders’ Cup Classic and a second-place finish by a nose in the San Antonio Stakes to Express Train. The $2.7 million earner, who was bought by Dennis O’Neill for just $110,000 from the Small Batch Sales consignment at the 2019 Fasig-Tipton Kentucky October Yearlings Sale, also crossed the wire first in the TVG.com Haskell Stakes but was disqualified and placed last for interfering with Midnight Bourbon after causing that runner to stumble and lose his jockey.

“He is such a blessing,” O’Neill said. “He’s every trainer and owner and groom and exercise rider and hotwalker’s dream. He’s just so honest and he shows up for every race so we’re hoping there’s many more chapters to go in this amazing book and we are grateful for him every day.”

As for Midnight Bourbon, Winchell Thoroughbreds’ son of Tiznow moves on to Dubai after a third in the Saudi Cup in which he bid from off the pace, only to be outfinished.

Though winless since January 2021 in the Lecomte Stakes, the Steve Asmussen-trained 4-year-old has been a gem of consistency in numerous major grade 1s. Included in his resume are runner-up finishes in the Preakness Stakes, Runhappy Travers Stakes, and Pennsylvania Derby.

“For him to run at this high level so successfully for so long without reward is truly amazing,” Asmussen said.

While Americans generally have an edge in racing over a dirt surface, the other seven entrants from other continents include two with a license to be threats in Saturday’s international classic.

Japan’s Chuwa Wizard turned in a strong effort to be second in last year’s DWC and the 7-year-old son of King Kamehameha was also second two starts ago for owner Shinobu Nakanishi and trainer Ryuji Okubo in the Group 1 Champions Cup at Chuyko.

Godolphin finished third in last year’s Dubai World Cup with Magny Cours, and will send out both the 7-year-old son of Medaglia d’Oro trained by Andre Fabre and Real World, a Dark Angel offspring trained by Saeed bin Suroor, in a bid for Sheikh Mohammed’s fourth straight win in the DWC and 10th overall for the Vice President and Prime Minister of the United Arab Emirates and ruler of Dubai. He races under the Godolphin banner.

2022-03-24
Previous Post: Texas Card House Wins Appeals Against City of Dallas
Next Post: Two players to back from each quarter