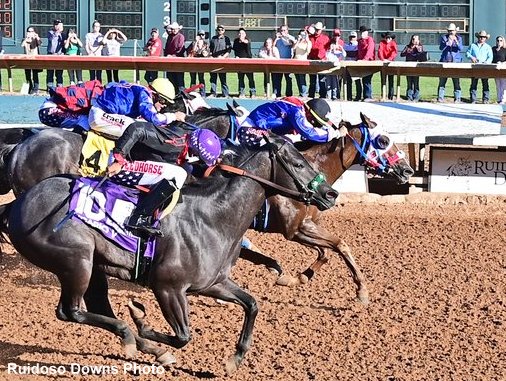 Hes Judgeandjury, a 2-year-old gelding, broke sharply and held off Sicario V by a neck to win the $3 million All American Futurity at Ruidoso Downs Race Track.

“I felt the key was getting my horse to relax in the warm-up before the race,” jockey James Flores said. “I got him away from the pony horse and just let him be himself so that when he was moving into the starting gate he was loose and ready to run a big race.”

Hes Judgeandjury is the second All American victory for trainer Heath Taylor who won in 2008 version with Stolis Winner.

“I was a whole lot younger back then,” Taylor remembered with a smile in the winner’s circle. “It’s not about the money—but it’s the history. The feeling that you have when you’re at the top of the game by winning the All American is like no other that I can describe. I think about winning this race all the time and I’m very fortunate to have won it for a second time, but it’s a team effort—there are many people and their horses that help make us successful.”

Hes Judgeandjury is owned and bred in Oklahoma by Jeff Jones and Steve Holt. The gelding’s sire is Hes Relentless out of the mare Crazy Down Corona by First Down Dash. The gelding paid $17.80, $6.80 and $4.40 in a running time of 21.192 seconds for 440-yards to win the 11 th race. Hes Judgeandjury is expected to head to California for the Los Alamitos $2 million in the fall.

“We got bumped early and had to sort of regroup on the fly,” jockey Juan Pulido said in the winner’s circle. “I asked him for some speed and he responded nicely. This horse is smart with plenty of natural ability to back it up.”

“That was a tough one,” owner Sammy Valeriano said in the winner’s circle. “Our horse came from behind and showed class all the way.”

The $150,000 All American Gold Cup was won by Powerful Favorite, a 6-year-old gelding who won for the eighteenth time in his career. Jockey Eduardo Nicasio has been the gelding’s jockey throughout his career.

“I believe it was his best race,” jockey Nicasio said in the winner’s circle. As he has grown older he tends to break a little better like he did today. That impressed me and put a smile on my face. It was an easy trip.”

Powerful Favorite covered the 440-yard 9 th race in a time of 20.936 seconds and paid $5.60, $3.20 and $2.40 for the Rosenthal Ranch and trainer Chris O’Dell. The gelding’s sire is Favorite Cartel out of the mare Remember Me Rose by Corona Cartel.

Monday was closing day at Ruidoso Downs for the 2022 racing season. The race track would like to thank all racing fans for their attendance throughout the season.