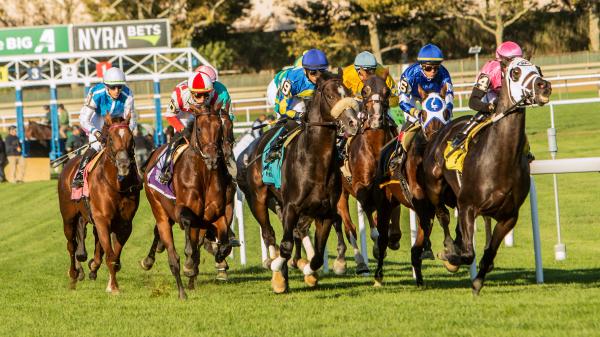 A field of 10 3-year-old males is entered for the $300,000, Grade 2 Hill Prince Stakes Saturday at Belmont at the Big A, one of just a few big races left in the year on grass which is restricted to this age group.

Leading the field in terms of earnings is Grand Sonata ($516,370), who won the Grade 3 Kitten’s Joy Stakes this past winter and most recently finished second in the Grade 3 Big Ass Fans Dueling Grounds Derby. Mackinnon can surpass that one with the $165,000 winner’s share of the Hill Prince purse as he’s made $360,360 in his career, most if it last year when he finished third in the Grade 1 Breeders’ Cup Juvenile Turf. Mackinnon is making his third start of the year and moves to the barn of current North American leading trainer Chad Brown, who also saddles Unanimous Consent, winner of the Woodhaven Stakes in April and most recently fourth in the Grade 3 New Kent County Virginia Derby. Hall of Fame trainer Todd Pletcher also has a pair of entrants, consisting of the aforementioned Grand Sonata as well as Be Better, who is trying turf for the first time and who finished last of eight in the Curlin Stakes in July in his previous start. Trainer Shug McGaughey, another Hall of Fame conditioner, also enters two horses in the Hill Prince, Celestial City and Limited Liability. Celestial City enters off an allowance win versus older horses and prior to that he finished second in the Grade 3 Saranac Stakes, while Limited Liability was a fast-closing third in the Virginia Derby last month. California shipper St Anthony won the Alcatraz Stakes in May and followed that up with a win in the Robert Dupret Derby in August but has finished eighth and fourth in two stakes starts since then. Wicked Fast has finished fifth and sixth in his two stakes tries, so he is trying to prove he belongs at this level. Similarly, Constitutionlawyer is making his first stakes start on turf. Nantasket Beach rounds out the field, moving way up in class into stakes company off a maiden win last month.

Limited Liability continues a pattern of improvement started in April when he made his 3-year-old debut following six months off. Coming back in a full field of 12 on grass at Keeneland, Limited Liability put in a visually impressive rally from last with a quarter mile to go and won by a neck at the finish. Moving right up into stakes competition, Limited Liability finished third in the Pennine Ridge Stakes, improving from a 92 Equibase Speed Figure in his comeback to a 96 figure. He then improved once again the following month to 105 even though seventh in the Caesars Belmont Derby Invitational, and followed that up by running very well when rallying from last of 10 to finish third in the Virginia Derby last month. He did so even while running five paths wide in the stretch and being squeezed with about an eighth of a mile to run. That effort earned a career-best 107 figure. Jose Ortiz, the only jockey Limited Liability has ever known, is aboard in the Hill Prince, and if Ortiz can settle the colt in back in the early stages and find a clear path to run in the lane, horse and rider could sweep past the field to win this year’s Hill Prince Stakes.

Unanimous Consent won the first three starts of his career, all on turf, from September of last year through this April. The third of those wins came in the Woodhaven Stakes over the outer turf course at Aqueduct which at the time earned the colt a career-best 85 figure. One month later he finished fourth in the Pennine Ridge Stakes, a length behind third place finisher Limited Liability. Following that, in the Virginia Derby once again Unanimous Consent finished behind Limited Liability, but just by a neck this time, earning the same 107 figure in the process. As he is on the same pattern for further improvement as Limited Liability and has proven competitive in similar top 3-year-old turf races, Unanimous Consent could be a strong contender here.

Celestial City has not faced his stablemate Limited Liability (also from the McGaughey barn) all year, until now, and his last race 99 figure is short of the 107 both Limited Liability and Unanimous Consent earned in their most recent starts. Just the same, having drawn the ground-saving rail Saturday and finishing worse than third only twice in eight races, Celestial City must be respected as a strong contender. The biggest reason is because his two best races have come in his last two starts and both came after adding blinkers. The first of those was a second-place finish to 5 ½-length winner Annapolis in the Saranac Stakes on Sept. 3, a race from which Annapolis returned from to win the Grade 1 Coolmore Turf Mile Stakes two weeks ago. The second was when moving from stakes to allowance competition just three weeks after the Saranac, resulting in a confidence-building win and improving from a 91 figure in the Saranac to 99. Jose Lezcano rides once more and from the inside post Celestial City could secure a more forward position in the race than his deep-closing stablemate Limited Liability, which means he could be in front earlier in the stretch with a chance to hang on.

Other contenders for exotic wagers such as the exacta: