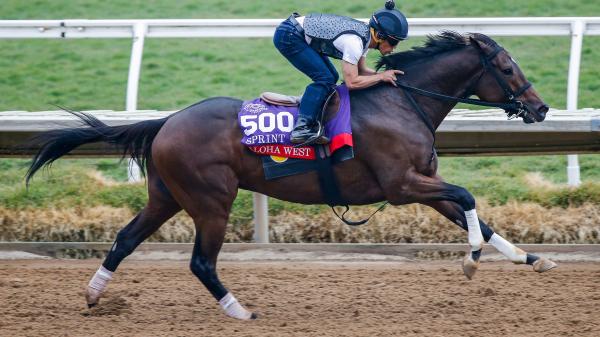 Live Longshots and Value Plays for the 2021 Breeders’ Cup

We’re drawing ever-closer to the 2021 Breeders’ Cup World Championships. Not only does the two-day racing festival feature tons of exciting racing action, it also includes tons of great betting opportunities.

Playing the horses is all about finding value. There’s no point in picking the favorite in race after race; that’s almost assuredly a losing strategy in the long run. On the other hand, you don’t want to blindly bet longshots just for the sake of betting longshots. The key is to find horses who you think have a good shot of winning that will go off at decent prices.

This year’s Breeders’ Cup features some probable heavy favorites, including Gamine in the Filly and Mare Sprint, Jackie’s Warrior in the Qatar Racing Sprint, and Life is Good in the Big Ass Fans Dirt Mile. However, there’s still plenty of great betting chances out there, as well as some horses who could pull the upset and cause some big payoffs.

Here, we’ll take a look at some of my value plays for the weekend, as well as some longshots to spice up the action.

The betting in this race will go through trainer Wesley Ward’s two best horses: #6 Twilight Gleaming and #8 Averly Jane. Although 2-year-old sprinting on the grass is generally a recipe for chaos, this race has been formful in its short history. Bulletin, who won at 4.30-1 in 2018, is the highest-price horse to win this race to date. Still, three races is not a great historical sample size, and there’s a few horses in here who could spring an upset.

Value Play: #7 Armor (6-1) One of several Europeans in the race, he won the Markel Molecomb Stakes at Goodwood in July. Since then, he’s been no worse than fourth in three group stakes races in England, including a near-miss in the Juddmonte Middle Park Stakes last out at Newmarket. He’s been keeping company with some of the best 2-year-olds in Europe, and now takes a drop in class (you don’t get to say that too often at the Breeders’ Cup!) into this spot. I’m hoping that he drifts up a bit from his 6-1 morning line; if he does, he’d be an excellent play.

Live Longshot: #10 Time to Party (15-1) Flavien Prat is considered by many to be the top grass jockey in the country. It’s not every day that he rides a longshot in a grass race, but he’ll be aboard Time to Party, who is likely to go off at an even larger price than his morning-line odds. He was a strong-closing second in the Speakeasy Stakes at Santa Anita Park last out, just missing behind one of the favorites in the Juvenile Turf Sprint, #9 One Timer. Trainer Peter Miller is very good with horses in grass sprints, and Prat hits at 30% when riding Miller’s horses. If you have the budget to use several horses in your multi-race bets, don’t leave this one off your tickets.

Fourteen 2-year-old fillies will go one mile on the grass in this race. The morning line favorite is #1 Pizza Bianca, at 5-1. It’s very rare to see a morning-line favorite at those kind of odds. In a race like this, you’ll get decent odds on just about every horse.

Value Play: #7 Consumer Spending (8-1) We’ll try another horse ridden by Flavien Prat. He teams up with top grass trainer Chad Brown, who has won this race five times, on Consumer Spending. This More Than Ready filly broke her maiden impressively at Saratoga over the summer and then won the Selima Stakes at Laurel Park last out with a decisive closing rally. Two years ago, Sharing parlayed Selima success into a Breeders’ Cup victory. Consumer Spending improved her speed figure by several points in this year’s Selima, earning an 82 on the Equibase scale and an 88 on the Brisnet scale. I’m hoping that she takes another step forward Friday and goes off at a decent price.

This race features 12 horses sprinting five furlongs on the grass, including several 3-year-olds. One of them is the morning line favorite, #3 Golden Pal. I’ll try to beat him with another 3-year-old.

Value Play: #6 A Case of You (8-1) Over the past few months, A Case of You has established himself as one of the top 3-year-old sprinters in Europe. He finished second at 33-1 in the Derrinstown Stud Flying Free Stakes two races back and then won the Prix d’Abbaye de Longchamp Longines by a head last out. In both of those races, he defeated Glass Slippers, who won the 2020 Turf Sprint and is likely to be one of the favorites in Saturday’s renewal. This colt is rounding into career-best form and could deliver a big performance at a decent price.

Seven of the 12 horses in here are internationally-based, and as such will likely attract lots of attention. I’ll turn mine towards an American-based mare likely to go off at long odds.

Live Longshot: #2 Pocket Square (15-1) This 4-year-old filly made her American debut in April for Chad Brown, and she has been getting better with every start. She most recently won the Athenia Stakes at Belmont Park last out in a big performance. She closed off an extremely slow pace and won by 2 ½ lengths going away. Her speed figure for that race wasn’t a career high, but given how slow the early pace was, it’s not likely that Pocket Square could’ve run a faster final time if she had tried. This race should feature a more honest pace, which will set up well for Pocket Square’s late rally.

#2 Jackie’s Warrior is the likely odds-on favorite in this race, but there’s another horse in here that I think has a big chance to win, at much better odds.

Live Longshot: #5 Aloha West (8-1) This Maryland-bred 4-year-old hasn’t won a graded stakes yet, and hasn’t even competed in a Grade 1 race. However, he’s been improving all year long and has run some big races in his last few starts. Two races ago, he easily defeated a third-level allowance optional claiming field at Saratoga. In his graded stakes debut, the Stoll Keenon Ogden Phoenix Stakes at Keeneland on Oct. 8, he closed furiously to get second, beaten just a neck by Special Reserve. On most speed figure scales, he’s only a few points slower than Jackie’s Warrior. If Jackie’s Warrior regresses a little bit, or if Aloha West improves by just a few points, we could see a big upset.

There’s four foreigners in the main body of the 14-horse field, including the morning-line favorite, #3 Space Blues. I’ll take a shot with another European.

Value Play: #12 Pearls Galore (12-1) She’s trying to become the fourth 3-year-old filly to win the Mile, joining Ridgewood Pearl in 1995, Six Perfections in 2003, and Goldikova in 2008 (Goldikova went on to win the Mile again at ages 4 and 5). This Paddy Twomey-trained filly won two Group 3 races in Ireland earlier in the year, and was recently second in two Group 1 races in Ireland and France. In her last start, she led briefly in the stretch before being overtaken by Space Blues. She was beaten two lengths by that rival, and will likely go off at a much bigger price than he will. I’m hoping for some further improvement at a large number.

There’s plenty of Europeans to choose from here as well. The morning line favorite is #13 Tarnawa, the defending Longines Turf winner who is pegged at 9-5 odds. That’s an awfully low price to take on a horse who has not won a Grade or Group 1 race this year and is breaking from an outside post position. I’ll look elsewhere.

Value Play: #9 Sisfahan (12-1) This lightly-raced 3-year-old won the Deutsches Derby, the German equivalent of the Kentucky Derby, by 1 ¼ lengths back in July. Since then, he’s raced well in two tries in Group 1 races against older horses, including a third-place finish in the Preis von Europa Stakes last out. He’s proven at 1 ½ miles and is making his third start off a brief layoff. He fits the mold of an overlooked European who can upset a major Breeders’ Cup race.