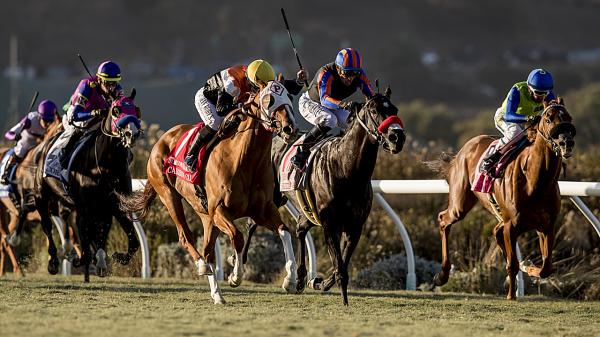 Looking for Potential Value When Betting the Matriarch Stakes

A stakes-packed weekend at Del Mar concludes on Sunday with the $400,000 Matriarch Stakes. A field of six fillies and mares will travel one mile on the turf course in the final Grade 1 race for older female horses in the United States this year.

There’s no dominant speed horse in this race. As such, a slow early pace is very likely, which could put the closers at a disadvantage and set up well for whoever takes the early lead.

#1 Princess Grace looks like the most likely early leader. She’s won three graded stakes races this year: the Grade 3 Dr. James Penny Memorial Stakes at Parx, the Grade 2 Yellow Ribbon Handicap at Del Mar, and the Grade 3 Kentucky Downs Ladies Turf Stakes. She won most of those races after racing just off the pace. Her last start, the Grade 2 Goldikova Stakes Presented by PNC, was also a race without much speed on paper. Sensing the situation afoot, Kent Desormeaux put her on the early lead. Princess Grace led most of the way before getting caught in the last sixteenth of a mile. She’s the only horse in the race who has led at the first point of call at any point in her recent races. She doesn’t always go straight to the lead, but with the lack of speed in this race it could end up being similar to the Goldikova, when she got the lead almost by default. If that happens again, she’ll control the pace and has a shot to lead from start to finish.

Chad Brown, the country’s top turf trainer, entered two horses. #3 Viadera won this race by a nose last year and won the Grade 2 Ballston Spa Stakes earlier this year. #6 Regal Glory has won two listed stakes this year, and she lost the Grade 1 First Lady Stakes Presented by UK Healthcare by a half-length to stablemate Blowout. Although Brown did not saddle a winner at this year’s Breeders’ Cup World Championships at Del Mar, he generally enjoys success with his California shippers. Last year, he won four stakes races on Thanksgiving weekend at Del Mar. Viadera and Regal Glory will be ridden by two of Brown’s top jockeys, Flavien Prat and Jose Ortiz, respectively.

Both Brown horses are serious contenders. They both have competitive speed figures, great riders, and lots of back-class. Regal Glory in particular has good tactical speed that will be helpful here. However, Brown horses tend to get overbet, and these two are most likely going to be the post-time favorites. Princess Grace may offer better value.

Wagering Strategy on a $25 Budget

Best of luck in the Matriarch!