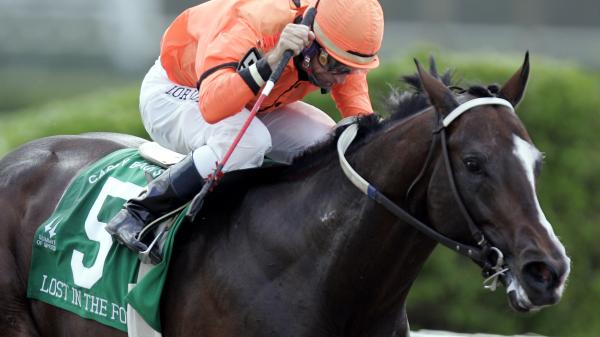 Lost in the Fog: The Courageous Sprinter

He came, like the fog in Carl Sandburg’s famous poem, silently. For a time he lingered, just long enough for his presence to be acknowledged. And then, like the fog, he moved on, all too soon, leaving everyone to wonder what might have been.

His name, of course, was Lost in the Fog.

Born in 2002, the son of Lost Soldier called Golden Gate Fields in Northern California his home, but he made stops in most of the major racing states, because he had no preference for a single track – as the saying goes, he carried his track with him. For trainer Greg Gilchrist, he was the horse of a lifetime – the Grade 1 winner, the champion he’d been seeking for nearly 30 years.

Lost in the Fog was fast, of that there was no doubt. The brilliant Florida-bred colt won the first 10 starts of his career, all of them sprints, and on nine occasions he won effortlessly by four lengths or more. As a 3-year-old in 2005, he journeyed across the country three times to Florida and four times to New York, winning five graded stakes races by simply running his rivals off their feet. He was rarely beaten to the lead, and the few horses that had the audacity to run with him paid the price – Lost in the Fog would power away and they faded in the stretch.

Forging a partnership with Hall of Fame jockey Russell Baze, the all-time leader by North American wins, Lost in the Fog was a seemingly unstoppable force. After winning a variety of stakes races across the country, including the Grade 2 Riva Ridge Breeders’ Cup Stakes at Belmont Park and the Grade 2 Swale Stakes at Gulfstream Park, Lost in the Fog brought his California connections to the pinnacle of racing – a Grade 1 at historic Saratoga. The race was the King’s Bishop Stakes, perhaps the most prestigious sprint in the country for 3-year-olds, and to win the race, Lost in the Fog would have to defeat a group of challengers trained by such renowned horsemen as Carl Nafzger, Steve Asmussen and Bob Baffert.

In theory, it should have been a challenge. In reality, Lost in the Fog never gave them a fighting chance and won by nearly five lengths. For Gilchrist, it was the first Grade 1 win of his career, and it remains so to this day. For Baze, it was just his fourth Grade 1 win, and his first outside of California.

It seemed as though there was no challenge too great for Lost in the Fog, and in October, he ventured back to New York as the heavy favorite to win the Grade 1 Breeders’ Cup Sprint at Belmont Park. He was so well respected by the bettors that he went off at odds of 7-10, and only one of his 10 rivals started at less than 10-1.

But this time, something was different. Three horses beat Lost in the Fog to the early lead, and while he battled back and was in front with just a furlong to go, his strides faltered when it counted and he finished seventh in the first defeat of his career.

A winter break was supposed to bring him back to form – perhaps his numerous cross-country trips had taken a toll. And while he lost his 2006 debut, finishing a surprising second in the Oakland Tribune Golden Gate Fields Sprint Stakes at his home track, there was cause for celebration when he won the Grade 3 Aristides Breeders’ Cup Handicap on June 3, 2006. It wasn’t his most decisive victory, but he was back in the winner’s circle.

No one knew at the time that Lost in the Fog had cancer.

Just 2 ½ months later, after Lost in the Fog had finished a disappointing ninth in the Grade 2 Smile Sprint Handicap, an examination revealed that Lost in the Fog was suffering from several large, inoperable tumors. Given that cancer is relatively rare in horses, the discovery came as a surprise, but also as a possible explanation for Lost in the Fog’s defeats. The Aug. 26, 2006, edition of The BloodHorse noted that veterinarians “estimated the tumors had been developing for a minimum of four months and perhaps for as long as a year.”

Efforts were made to shrink Lost in the Fog’s tumors to the point that chemotherapy or surgery could prolong or save his life, but on Sept. 17, the colt took a turn for the worse and was euthanized.

“As much as he accomplished, we’ll never know how good he really was,” said Gilchrist during a teleconference that was quoted by Bloodhorse.com. “What a warrior, to win a graded stakes race three months before he was put down. He never let us down, and we didn’t ever want to let him down.”

Lost in the Fog was buried at Golden Gate Fields. More than 15 years have elapsed since his untimely passing, but memories of the sensational sprinter still burn as brightly as fog on a sunny morning at Saratoga, where he carried his connections to the highest of heights.

Note: This story was first published in July 2017 and has been updated