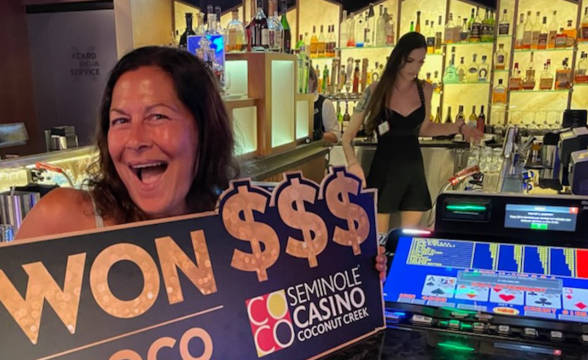 A lucky player has hit the progressive jackpot on Dragon Link Golden Century at Seminole Casino Coconut Creek in Florida on Wednesday. According to the casino, the player won just under $1.1 million on a $25 spin.

This year has been quite productive for players at Seminole Casino Coconut Creek. According to the casino, its 2,200 slots have paid $624 million in winnings in 2022. In a statement, the casino expanded more on how progressive jackpots work.

The statement read that a part of the money that players use to wager on the slot is put into a prize pool. That way, the jackpot of the game increases with each bet that is placed on the machine. Two or more slots can be linked and in doing so, more players can compete for the prize.

Seminoles further explained that the randomness of the outcome is what makes progressive jackpots so entertaining. The tribe said that even if a progressive slot just paid out a win to a player, the next spin could also be a winning one.

As for Dragon Link Golden Century, this title is a part of Aristocrat’s Dragon Link series. The game features an Asian theme and it incorporates the famous Hold & Win bonus feature. The progressives of Dragon Link are linked at the casino in Coconut Creek, Hard Rock Hotel & Casino Tampa, and Hard Rock Hotel & Casino Hollywood, all of which are operated by the Seminole Tribe. The Tampa and Hollywood casinos recently incorporated the $1 million jackpot game.

Hard Rock Hotel & Casino Tampa Had a $1.3 Million Winner Back in May

Casinos operated by the Seminole Tribe seem to be quite rewarding to their players this year. With the latest win at the Coconut Creek casino, Aristocrat’s Dragon Link series at Seminole-operated casinos have paid 8 jackpots in which the prize was over $1 million in 2022.

Back in May, Hard Rock Hotel & Casino Tampa paid out $1.3 million to a lucky player on Dragon Link’s progressive game.

What’s even more impressive is that the Tampa casino reported back then that it has paid out over $800 million in jackpots to around 30,000 players. By the end of May, there were 285,000 jackpot wins, which equates to a jackpot win per minute in 2022.

The Tampa casino has over 5,000 slot machines, 179 table games, as well as a unique Poker Room. The room features 46 games and the Mezzanine Level Casino, which is a smoke-free area.

A $1.3 million jackpot was also won at Seminole Hard Rock Hotel & Casino Hollywood at the end of January 2022.