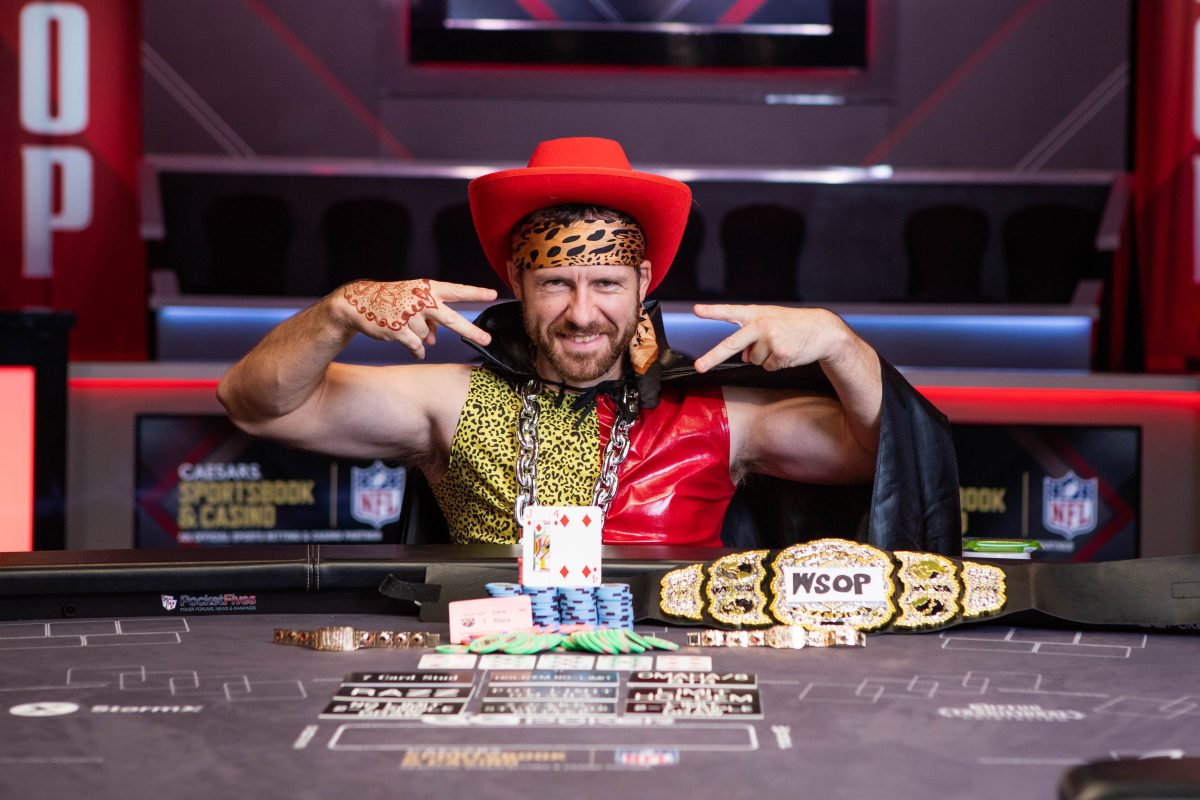 Dan Cates has gone back-to-back in one of the crown jewels of the WSOP, the $50K Poker Players Championship (PCC).

Cates came to the final table not only dressed as a lost son of pro wrestling icon “Macho Man” Randy Savage, but stayed in character as he battled Benny Glaser, Yuri Dzivielevski, Johannes Becker, and Naoya Kihara on his way to the repeat.

Last year, Cates won the PPC dressed as Saiyan from Dragon Ball Z. He dyed his hair green for the full effect, shooting imaginary fireballs from his hands on the way to the trophy named after Chip Reese. In 2019, he finished sixth in the PCC dressed like Dan Cates.

This year, he wore a cape with “Savage” stitched in silver and red on the back, changed his voice into a gravel road, and made an entrance fit for the WWF.

The only thing missing was the pump-up music, smoke machines, fireworks, and a facsimile of Miss Elizabeth.

He even brought a championship wresting belt with a piece of paper with “WSOP” taped on the front, which sat next to his real WSOP bracelet on the table the entire match.

He imitated the Macho Man the whole night, starting with the pre-game interview.

“Listen, it’s just like dejevu, you know what I’m saying,” when Jeff Platt asked him what it feels like entering the final table as chip leader a defending champion.

As for the remaining opponents?

“Four other players? I didn’t even realize these seats were occupied. This Benny Glaser guy, he once played me on the Internet, but NOT ANYMORE can you hide you face behind the Internet, Benny Glaser, because now your face-to-face with Macho Man Dan!”

Glaser, the UK great, stood near the table, recording video on his phone in the background, chuckling.

He started almost even with Cate’s 9 million chips.

Brazil’s Dzivielevski brought his two bracelets and a stack of 7.5 million.

Add Cate’s bracelet, and that’s nine WSOP victories between them.

With so much poker intellect and power assembled under the studio lights, it’s no wonder the final table lasted almost 12 hours.

It took about five hours to get heads-up between Dzivielevski and Cates. Becker, Glaser, and Kihara were eliminated in that order.

Kihara is having a good 2022 WSOP. This was his second third place finish, along with a fifth.

When Kihara was eliminated, Dzivielevski’s large and boisterous rail turned up the volume and to energize their man. Cates responded by turning towards them, lifting  his fake belt, and they erupted in boos and jeers. 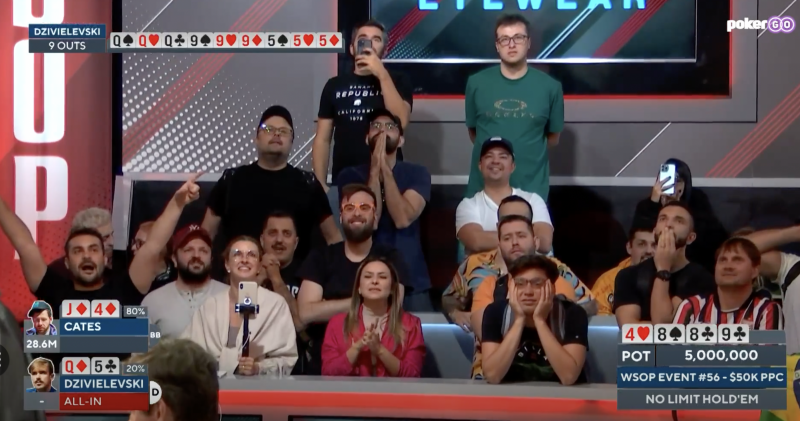 Dzivielevski’s rail rooted for their man until the bitter end. Here they are cheering for a nine-outer that never came. (Image: PokerGO)

It was only the beginning, as the two players strapped themselves in for an epic heads-up match that seesawed back and fourth.

Twice Dzivielevski had a nearly four-to-1 chip lead, but couldn’t send “Macho” Dan to the rail. 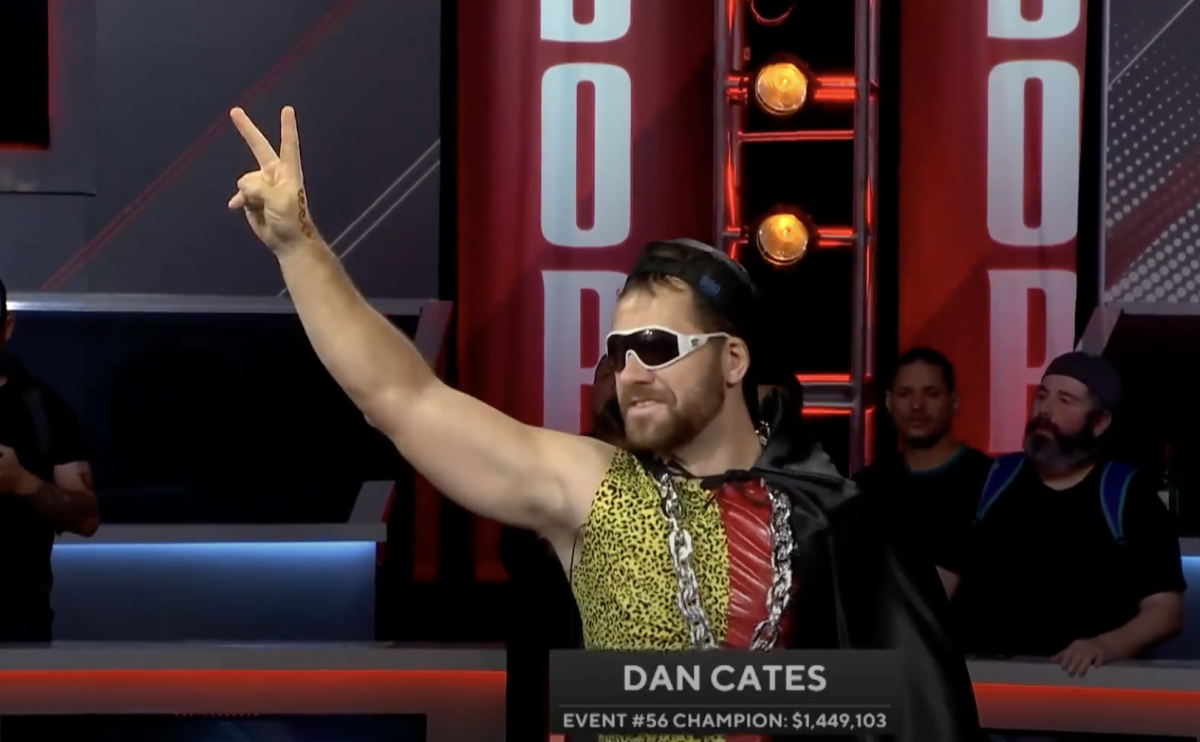 Platt, playing up the wrestling angle in the post-match interview, told Cates it was “one of the greatest accomplishments in poker history.”

Cates ended the day like he started it, channeling the Macho Man while leveling heaps of praise on Dzivielevski, who called his experience “incredible. I’m going to remember it forever. Amazing,” he told Platt.

Dzivielevski won $895,614 for what Cates called a “valiant” effort. 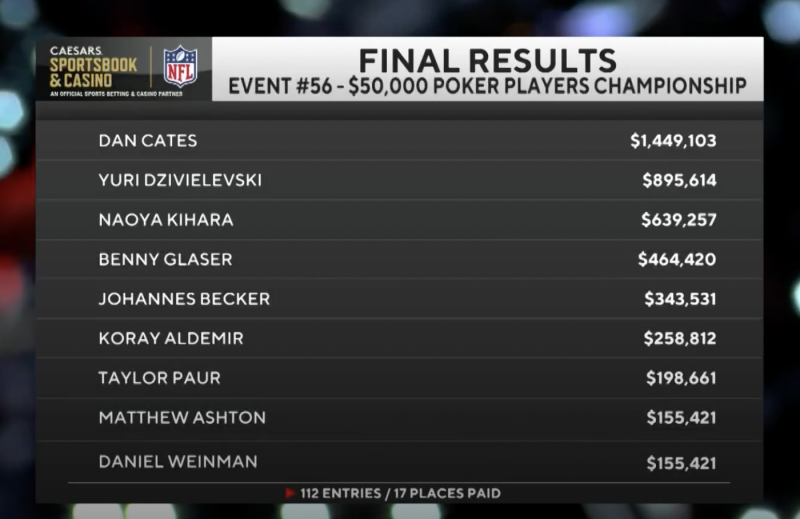