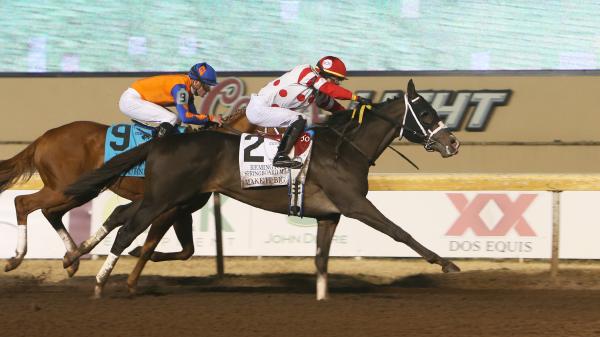 Make It Big Battles to Victory in Springboard Mile

Red Oak Stable’s Make It Big remains undefeated in three starts after a game victory in the $401,200 Remington Springboard Mile Dec. 17. The 2-year-old Neolithic colt also picked up 10 points on the Road to the Kentucky Derby in the late-night race at Remington Park.

Make It Big has never raced on Lasix and was one of three horses to run without it in the Springboard Mile. Points for the Grade 1 Kentucky Derby Presented by Woodford Reserve are awarded to horses only if they have not raced on the diuretic during the qualifying races.

Sarah Shaffer, trainer Saffie Joseph Jr.’s assistant, was on hand for the victory, just having met the horse for the first time this week. She stables at Fair Grounds Race Course & Slots.

“He has a personality and a half,” Shaffer said. “We expected the cold weather to sharpen him up here.”

Temperatures were brisk in the high 40s when seven juveniles broke from the gate for the Springboard Mile. Jockey Jose Ortiz put everything he had to keep Make It Big in his skin before the race during the warmup. After the break, Ortiz let his mount settle in fifth down the backstretch, while Classic Moment and Bye Bye Bobby dueled for the lead through fractions of :24.77 and :49.22 through a half-mile.

Ortiz asked Make It Big for run at the top of the stretch. By that time the colt was rolling and engaged Osbourne, who took the lead before the field left the final turn and ran three-quarters in 1:14.94. Make It Big battled neck and neck with Osbourne throughout the length of the stretch, edging that rival by a half-length at the finish.

The other horse earning Kentucky Derby points in the Springboard was runner-up Osbourne, who collected four points. The third and fourth place finishers, Concept and Classic Moment, both competed with Lasix. Rowdy Rascal, Revenir, and Bye Bye Bobby completed the order of finish.

Rick Sacco, racing manager for Red Oak Stable in Ocala, Fla., was non-committal on where Make It Big’s first start as a 3-year-old will be in 2022.

“We will enjoy these Kentucky Derby points,” said Sacco, “but we will have to discuss where we send him next.”

Make It Big won his first two starts at Gulfstream Park—an Oct. 9 maiden special weight and the Oct. 30 Ocala Stud Juvenile Sprint Stakes, both at seven furlongs and both for Florida-breds. He now has earnings of $303,828, already paying back his purchase price of $120,000 when he was picked from the consignment of Paul Sharp at the Ocala Breeders’ Sales Spring Sale of 2-Year-Olds in Training.

The dark bay’s first two wins came with Edgard Zayas in the saddle, who missed the Springboard Mile call because of surgery on his shoulder, Ortiz said.

Make It Big was bred by SHH Ventures and is the second foal and second winner out of the Congrats mare Ruby On My Mind. The mare also has a weanling colt by Bucherro and was bred back to Bucchero for 2022.