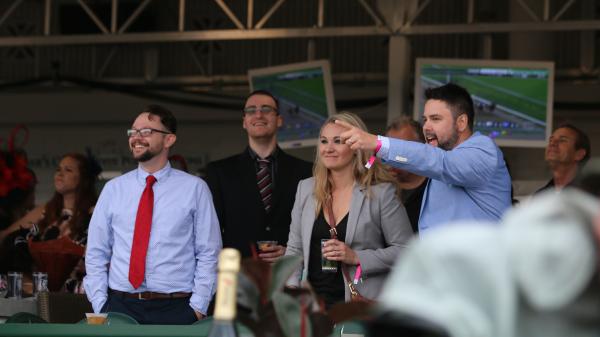 Making Money Betting a ‘Horse for Course’ in Clark Stakes

Friday’s $750,000 Clark Stakes Presented by Norton Healthcare at Churchill Downs is the last major dirt route race on the North American calendar, and it traditionally draws some of the best longer-distance horses in training that for one reason or another skipped the Longines Breeders’ Cup Classic.

That’s certainly the case this year, as the 1 1/8-mile, Grade 1 Clark drew a salty eight-horse field featuring seven graded stakes winners and two millionaires. The latter pair, #8 Maxfield and #1 Midnight Bourbon, figure to be the top two betting choices at post time for different reasons. Over the past 11 months, Midnight Bourbon has competed against the very best of what has turned out to be a stellar 3-year-old crop. Despite going winless in seven straight starts, he’s finished second in three major races going back to mid-May: the Preakness Stakes, the Pennsylvania Derby, and the Runhappy Travers Stakes, losing the Travers by a neck to probable champion 3-year-old male Essential Quality.

Maxfield, on the other hand, comes into what will be his final career start before going off to a stud career with a perfect 4-for-4 record on Churchill Downs’ dirt main track. He won his career debut under the Twin Spires back in September 2019 (yes, I was in attendance; no, I didn’t bet him at 10.10-1 odds) and then dominated in the 1 1/16-mile Matt Winn Stakes in May 2020, which was his first of only two starts in a 3-year-old season hindered by injury.

Maxfield came back earlier this year at age 4 to romp in both the 1 1/16-mile Alysheba Stakes Presented by Sentient Jet on the April 30 Longines Kentucky Oaks undercard and then the 1 1/8-mile Stephen Foster Stakes on June 26, winning both races by the same margin of 3 ¼ lengths. Since then, he’s finished second twice with creditable efforts in 1 1/8-mile races away from his favorite track. He was runner-up behind Knicks Go, the overwhelming favorite for 2021 Horse of the Year, in the Whitney Stakes at Saratoga on Aug. 7 and then came 1 ½ lengths short of Art Collector in the Woodward Stakes at Belmont Park on Oct. 2, a race that was held around one turn rather than the two turns that Maxfield prefers. He earned a career-high Equibase Speed Figure of 118 in the Woodward.

I expect this talented Godolphin runner to cycle back to his best form Friday – and more importantly, I expect his regular rider Jose Ortiz to position him no worse than fourth through the first half-mile or so rather than keeping him farther back. Maxfield was a true deep closer early in his career, but this year he’s shown the ability to position himself nearer to the early leaders and make his winning move on the far turn rather than wait until he hits the homestretch. He’ll need to race within range of Midnight Bourbon in the Clark, because this field is bereft of early speed and Midnight Bourbon (who gets red-hot jockey Joel Rosario aboard for the first time) could very well be all alone in front through the backstretch.

If Maxfield can work out an ideal trip where he is able to get over from his outside post and save ground through the first turn, he should be able to move up through the backstretch and take aim on Midnight Bourbon in the far turn, and then let his talent and love of Churchill’s strip take over somewhere around the quarter pole. The only time Maxfield has finished worse than second in 10 career starts came in his first start of 2021 when he was third in the 1 ¼-mile Santa Anita Handicap, and he was a clear second in both of his most recent starts behind supremely talented opponents. Friday’s Clark field is tougher than the ones he faced in the Alysheba and Stephen Foster, but I’m banking on Maxfield going out no worse than second in his finale.

There are three other runners in the Clark that warrant a long look as pricier win candidates and/or logical horses to fill out the exacta or trifecta: #3 Dr Post, #4 Happy Saver, and #5 King Fury. Each of them has shown eye-catching talent once or twice during his career and they are all graded stakes winners (Happy Saver is a Grade 1 winner), plus they get top-rank jockey assignments in the Clark (Irad Ortiz Jr., Tyler Gaffalione, and Brian Hernandez Jr., respectively). Of the three, I think Happy Saver has the most potential to run a big one as the pace dynamic for the Clark projects as modest and he prefers to race just off the lead. However, I’ll use all three plus Midnight Bourbon underneath Maxfield in my trifecta ticket in what shapes up to be an exciting renewal of the historic Clark. I’ll also bet a less expensive trifecta ticket with Maxfield in the runner-up spot.

Betting Strategy on a $40 Budget: