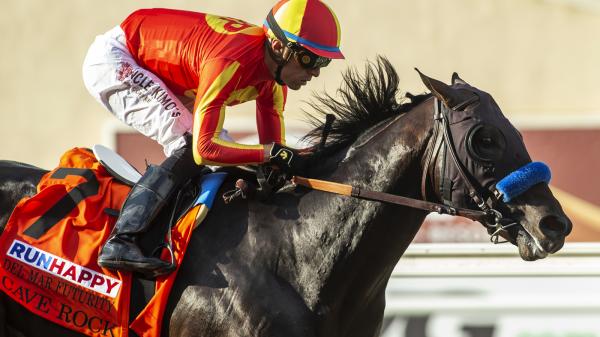 There are many talented racehorses entered to compete in the Nov. 4-5 Breeders’ Cup at Keeneland. The 14 races have attracted top-notch horses from around the world, and many of the fields appear incredibly competitive on paper, however, the $2 million Grade 1 FanDuel Breeders’ Cup Juvenile presented by Thoroughbred Aftercare Alliance is a notable exception. Even though an elite field has turned out to compete in the 1 1/16-mile Road to the Kentucky Derby qualifier, morning-line favorite #3 Cave Rock (4-5) is a standout seemingly destined for victory.

In the Del Mar Futurity sprinting seven-eighths of a mile, Cave Rock flaunted extraordinary early speed, setting intense quarter-mile fractions of :21.56 and :43.65 before kicking clear of Grade 2 Best Pal Stakes winner Havnameltdown. In the American Pharoah, Cave Rock quietly rationed his speed over 1 1/16 miles, setting much more controlled fractions of :22.96 and :46.82 before drawing off to win by 5 1/4 lengths.

Just as importantly, Cave Rock has been posting fast final times. He reached the Del Mar Futurity finish line in 1:20.99, a stakes record. And he won the American Pharoah in 1:43.05, a sharp time over a somewhat slow racing surface. If you’re a fan of Brisnet Speed ratings, which place final times into context with the speed of the racing surface, Cave Rock is a standout in the Breeders’ Cup Juvenile. Whereas none of his rivals have posted a Brisnet Speed rating higher than 101, Cave Rock has posted improving figures of 104, 105, and 107 in his first three starts. Throw in the fact trainer Bob Baffert has won the Juvenile a record-equaling five times, and Cave Rock looms as possibly the most likely winner of the entire Breeders’ Cup.

Who should we use underneath Cave Rock? An obvious choice is #4 Forte(4-1), who posted a 101 Brisnet Speed rating when defeating future Grade 1 Champagne Stakes winner #6 Blazing Sevens (6-1) in the Grade 1 Hopeful Stakes at Saratoga. Forte followed up with a gritty victory in the Grade 1 Claiborne Breeders’ Futurity at the same track and distance as the Breeders’ Cup Juvenile, so the conditions at Keeneland should suit this Todd Pletcher trainee just fine.

Blazing Sevens is bound to be a popular choice as well after bouncing back from his Hopeful defeat to win the one-mile Champagne with a last-to-first rally. Blazing Sevens was much the best in the Champagne, defeating #5 Verifying (10-1) by 3 1/4 lengths, but it’s worth noting the Champagne took place on a sloppy track. The outside lanes from which Blazing Sevens rallied seemed better than the inside lanes on which Verifying ran for the entirety of the race, so a fair track at Keeneland may tilt the advantage in Verifying’s favor. Certainly Verifying has the appearance of a promising colt. The son of Triple Crown winner Justify is a half-brother (same dam [mother], different sire [father]) to 2019 champion older dirt female Midnight Bisou, who placed in multiple editions of the Breeders’ Cup Distaff. Verifying is bred to thrive at the two-turn configuration of the Breeders’ Cup Juvenile, and trainer Brad Cox won this race two years ago with two-time champion Essential Quality. All signs suggest Verifying is sitting on a strong showing at Keeneland.

We also have to highlight #10 National Treasure (8-1) as a key contender for exotic wagers. The Bob Baffert trainee wired his debut sprinting at Del Mar by 1 1/2 lengths, then gamely chased home Cave Rock to finish second in the American Pharoah. National Treasure pulled well clear of the third-place runner and earned a 101 Brisnet Speed rating even in defeat, suggesting the bay colt is fast enough to occupy the runner-up spot behind Cave Rock once again.

If you’re playing on a small budget (say, $12) we’ll steer you toward a trifecta using Verifying and National Treasure for second place. But if you’re willing to spend a bit more (how about $32?), we have both a trifecta and a superfecta for you to bet:

Good luck and enjoy the race!