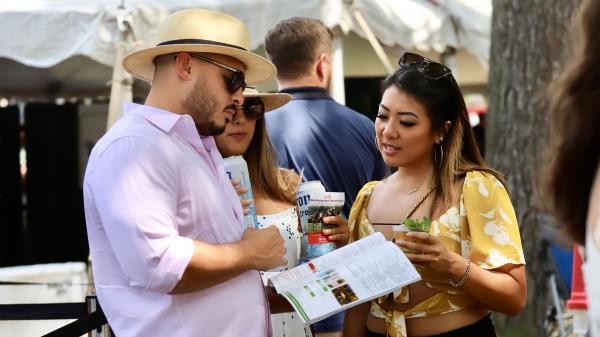 It’s not a stretch to conclude Saturday’s Grade 1 Runhappy Travers Stakes at Saratoga is much more than a battle for the winner’s share of a $1.25 million purse.

In addition to the lucrative prize money, the historic “Mid-Summer Derby” is shaping up as a defining battle for division leadership. Eight of the best 3-year-old Thoroughbreds in the country are set to square off over 1 ¼ miles, including the vast majority of contenders for Champion 3-Year-Old Male honors at the Eclipse Awards. Whoever wins the Travers is going to have a strong shot at earning the year-end championship.

The morning line odds have established #6 Epicenter as the 7-5 favorite, and understandably so. The Steve Asmussen trainee has been on a roll dating back to last year, when he broke his maiden at Churchill Downs and dominated the Gun Runner Stakes at Fair Grounds.

Epicenter has competed in six consecutive graded stakes this year, finishing first or second every time. During the winter at Fair Grounds, he improved steadily to post sharp victories over tough competition in the Grade 2 Risen Star Stakes Presented by Lamarque Ford and Grade 2 Twinspires.com Louisiana Derby. Then in the Grade 1 Kentucky Derby Presented by Woodford Reserve, Epicenter stayed within striking distance of a historically fast pace, took over the lead with a quarter-mile remaining, and fought on gamely down the homestretch to finish second by just three-quarters of a length.

Given the tricky pace scenario, Epicenter arguably ran a better race in the Derby than the victorious #2 Rich Strike, who rallied from far behind the blazing pace. And Epicenter ran well again in the Grade 1 Preakness Stakes two weeks later, overcoming early traffic trouble to rally hard and finish second by 1 ¼  lengths against the unencumbered #7 Early Voting.

Epicenter took a couple of months off after the Preakness, then returned to action with a powerful performance in the 1 1/8-mile Grade 2 Jim Dandy Stakes at Saratoga. Facing just three rivals, Epicenter settled in last place as Early Voting carved out the pace. Then in the final three furlongs, Epicenter unleashed an outside rally to cruise past the field and win easily by 1 ½ lengths.

The Saratoga dirt track has been slow this year, but Epicenter completed the Jim Dandy in a strong 1:48.99. The ease of his victory suggests the bay colt remains in peak form and is the horse to beat in the Travers.

Who are the other key contenders? Certainly Rich Strike and Early Voting are frontrunners to be named Champion 3-Year-Old if they win the Travers, but both colts enter with questions to answer. Rich Strike followed his 80.80-1 Kentucky Derby upset with a sixth-place finish in the Grade 1 Belmont Stakes Presented by NYRA Bets and needs to prove he can win without the aid of a hot pace. Meanwhile, the speedy Early Voting needs to rebound from a disappointing run in the Jim Dandy, where he faded down the homestretch to finish last of four.

In contrast, #8 Zandon enters the Travers with a strong chance to be a factor. The Grade 1 Toyota Blue Grass Stakes winner has yet to finish out of the top three in half a dozen starts, including when third in the Kentucky Derby and second in the Jim Dandy. True, he’s finished behind Epicenter in all three of their meetings and might do so again on Saturday, but bettors can’t leave Zandon out of trifecta tickets.

The same can be said of #1 Cyberknife, winner of the Grade 1 Arkansas Derby and Grade 1 TVG.com Haskell Stakes this season. Cyberknife knows how to win a close fight (his last two victories have come by a nose and a head), and while Haskell starters don’t often come back to win the Travers, Cyberknife has gradually developed into an effective and versatile racehorse capable of winning from pretty much any position on the track.

This brings us to #5 Artorius, one of the toughest contenders to analyze. In terms of Beyer and Brisnet speed figures, Artorius has yet to run a race fast enough to challenge the Travers favorites. But Artorius is a son of record-breaking 2016 Travers winner Arrogate, and Artorius took a big step forward in his most recent start, sweeping from midfield to trounce the 1 1/8-mile Curlin Stakes at Saratoga by 4 ¾ lengths.

Artorius is bred to improve with maturity and is clearly progressing in the right direction for hot trainer Chad Brown, who also conditions Early Voting and Zandon. Three-time Eclipse Award-winning jockey Irad Ortiz Jr. is named to ride, which is another positive in Artorius’s favor. One more step forward would give Artorius an outside chance to upset Epicenter in the Travers, though a top-three finish might be the more likely outcome.

So how should we bet the Travers? The Jim Dandy has produced five Travers winners since 2010, so we’ll count on Epicenter to take down top honors. Underneath, we’ll focus our attention on Zandon, Artorius, and Cyberknife while trying (for the most part) to beat Rich Strike and Early Voting.

2022-08-25
Previous Post: Delaware’s iGaming Soars, Sports Betting Struggles
Next Post: What is the Likely Ceiling for the USMNT at World Cup 2022?