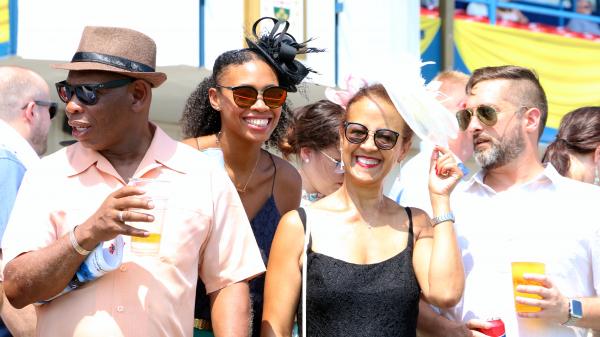 The Canadian Stakes Presented by Japan Racing Association, which will be run Sunday, Aug. 21 at Woodbine Racetrack in Toronto on the E.P. Taylor turf course, showcases a talented field of eight fillies and mares for a purse of $200,000. The Grade 2 race will be featured on ABR’s “Queen’s Plate Pre-Game LIVE!” livestream as part of the Queen’s Plate coverage beginning at 4 p.m. ET.

The Ladies of the Lawn will be traveling 1 1/8 miles in this one-turn event. Shippers from American stables are prominent, including the morning line favorite #3 Crystal Cliffs for Graham Motion at 2-1, #6 Flirting Bridge at 4-1 for Brendan Walsh, and the Argentine-bred #8 Bellagamba for Ignacio Correas at 6-1. Mark Casse is an honorary Canadian, and the Hall of Famer sends out second morning-line choice #2 Fev Rover at 5-2 as well as longshot #7 Keyflower to try to upset at 10-1.

Stamina is important in these turf routes, and horses who sit just off of the pace can have success. Outside post positions are traditionally the best places to start from.

The mare to beat is the headliner Crystal Cliffs. The French-bred mare closed furiously to finish in a dead heat for the win with favored Lady Speightspeare in the Nassau Stakes at Woodbine on July 2 and she looks poised to run a big one again.

The Irish-bred Fev Rover is the second choice on the morning line at 5-2 and makes just her second start in North America after shipping from her European base. She hasn’t won a race in a year and does finish second more than first. That is always a concern, especially with the short odds she is likely to carry.

Flirting Bridge is another Irish-bred lass who looks dangerous. She has a tremendous closing kick and handled a field at Churchill Downs with ease in her first U.S. race. She had a wide trip at Parx Racing in her next start but managed to get up for second in the Dr. James Penny Memorial Stakes behind multiple graded stakes winner Princess Grace.

There is enough probable pace in the race to allow every horse to run to their strengths. With a possibility of rain in the forecast, the European mares may end up having an advantage and would appreciate some give in the ground.

Wagering Strategy on a $25 Budget: